In Support of Dr. Peter Gallogly

I saw the video, I've heard the comments, and read the police reports.  You should too.  I can also add some points you have not read anywhere else.

I've been seen by Dr. Peter Gallogly and Dr. Tom Raulerson at the Gainesville After Hours Care, mostly in its old location on 2nd Avenue.  I appreciated the care I received so much that I considered them my primary physicians, even though the facility was frequently jammed and it was hard to get an appointment.

They also are the only game in town in the evenings and weekends outside of the emergency room, which means they see a lot of urgent cases. 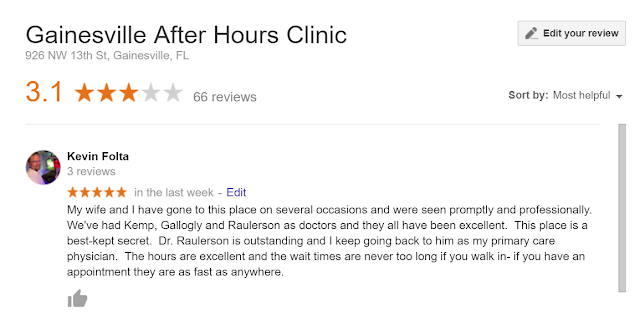 
I'm a state employee, I have great insurance, and I can go anywhere.  I chose GAHC because of the professionalism, the compassion, their social mission, their service to the community, and an appreciation for the good physicians and staff that work there.

Both of these physicians always took the time to listen, they were careful and thorough, and served a clientele that typically was uninsured and on tight budgets.  I sat in their waiting room and listened to the stories, heard the excuses, and met many people that were a medical mess but looked to GAHC for excellent care.

I even talked to Dr. Raulerson about it.  He said that it was a mission, the best kind of care to provide.

From just sitting in the waiting room a dozen times I can tell you that his staff endured frequent abuse from many more people than Jessica Stipe.

Once I listened to two people complain about Dr. Raulerson taking too much time before they could be seen.  He was obviously running late, or something else was taking his time.

One of them went outside and came in and reported, "His truck is in the parking lot, so I know he's here..."

I thought this was strange. These frequent patients know what the physician drives and then actively stalk him to determine if he's even on site?

I've seen people bang on the sliding window making demands, I've seen people loudly complain about payments, I heard people talk in the waiting room about the staff and physicians in unbecoming ways.

I understand.  It is inconvenient, and it is awful to have to wait for care when you're ill. The magazines are from 2014 and the carpets are old, but this is a place where physicians are doing their best to serve a challenging, predominantly underinsured clientele.

I thought Dr. Gallogly's response and apology were first rate, and show his professionalism and class.

I also think that his over-reaction was even a bit reserved.  I would have removed them myself after they threatened my staff with physical violence. Sorry, I'm not going to blame the guy for being angry.

And he should have taken her phone.  It is not a public space, Florida law requires all parties to consent to recording on private property, and I hope he follows up with action against Stipe.  He probably won't.  He's classier than I am.

Bottom line- I was compelled to write this because I know what it is like to be massacred in the Court of Public Opinion and how lonely it can be to see your solid career trashed in social media.  I want a good report to pop up when people search his name. 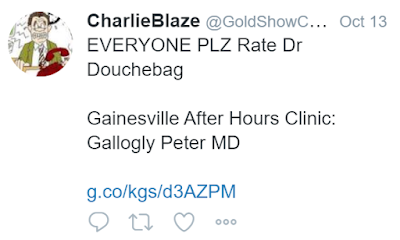 One frustrated moment dealing with a horrible patient and the internet wants to end your career.


Thanks to Dr. Gallogly and everyone at GAHC.  You do a great service for our community, and I'm sorry you have to endure this episode.

And if you ever decide to hire a bouncer for your waiting room let me know.  I'd love to correct some of the bad behavior I've seen happen there.