Huber's Letter to My Superiors

Four years ago this week I attended a talk by anti-GMO darling Dr. Don M. Huber, Emeritus Professor affiliated with Purdue University. In his presentation, Huber made reference to his Molecular Bigfoot, a mysterious new organism that only he has seen, that is harbored on Roundup Ready crops. And it kills you and gives your kids autism.

The magical organism is a central part of his campaign to spread fear around modern agriculture, and he travels the globe misleading audiences and invoking fear from authoritative credentials. As I've always said, he has a solid record and history. That's what makes his fear campaign more deplorable.

Here are some things you don't know about the story, mostly because I decided not to make a big deal of it.  I will now. He's still out peddling his nonsense, so it is appropriate to show more about who he really is.

The Slide at PAG

The Plant-Animal Genome Conference brings many people together in my discipline. It is the place where me and my colleagues and collaborators get together to see new science and plan future work.

In 2016 the conference had a session, a crazy session, where Huber was on the agenda!  He told his story of GE crop doom to a room of scientists that politely sat through it.  In his slide deck, he took the opportunity to throw me under the bus. 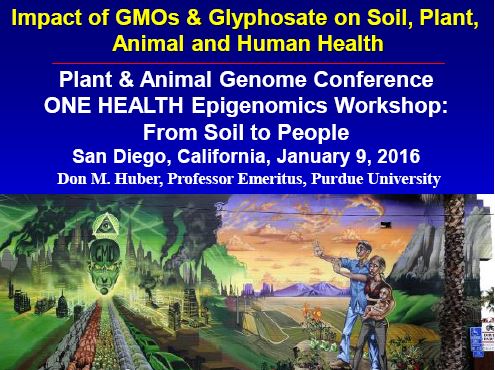 This is the title slide from his talk.  I can't make this stuff up. 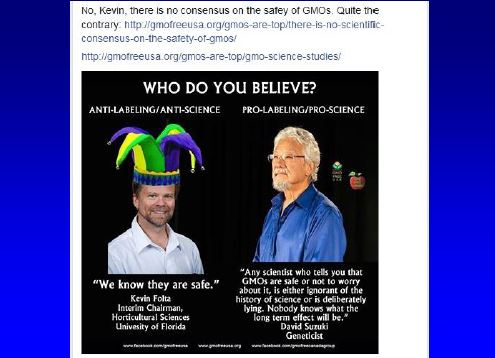 This is also a slide from his deck.  I can't make this stuff up.  It shows his utter contempt for other scientists and the scientific literature.  Plus, to include this in the slide deck at a national conference is a low-class move.

Letter to University Administration
I was talking to my boss one day and on the way out he handed me a letter.  He said, "I think you need to know who is out there, don't do anything with this."

It is four years later and I think it is important to understand what Huber is all about.

The letter was from Don M. Huber to my university administration. I'm not going to post the whole thing, it is rambling and boring, but am happy to send it to you.  We can avoid the whole FOIA request thing.

Huber impugns my professionalism. This coming from a guy that travels the world scaring people with a fictitious organism, lumpy rat photos and Seneff correlation charts.

They were worried about "intimidation" because I sent a letter to the people hosting him, warning them about his message of fake organisms and glyphosate causing autism (and everything else).

He says that I "did not allow an opportunity for fair and informative discussion (and was) disruptive and disparaging." I recorded the whole thing.  I didn't make a peep during his talk and sat patiently, and until the Q&A when I constructively requested a sample of his "organism" so we could sequence the genome.  I just made an offer to help him.  To date, there is no evidence of his organism.

The guy that sends a letter to the US Ag Secretary claiming evidence of a scary organism in GE crops, based on zero evidence, hopes for me to get ethics counseling.

There's a ton more, but no need to go there.  He was so mad that I didn't just buy his story and instead asked for evidence. That's my job.

It says a lot about him that he'd write to my bosses, stating that I was "disruptive and disparaging", when I quietly sat and watched his presentation.

The good news is that the recording I made that night confirms my position.  Glad I did that.

I also showed this letter to other professors and organic growers that were in attendance that night.  They were truly disappointed that Huber would manufacture a false story with the intent of harming my standing within the university, a place where I am in a leadership position that requires a great relationship with my superiors.

*
He produced disparaging slides about another scientist for a national conference.  He reported false claims to harm my standing with my administration, simply because I offered assistance in solving a crisis that he claims is real.  He was held accountable for his wild claims.  He doesn't like that.

He still continues to tour the planet, telling his tall tales to farmers and lay audiences.  It is a sad mission, and a pathetic end to a good career in public service.

Time will not be kind to Dr. Huber.

If he apologized and came clean now he'd be a hero. All would be forgiven.