Fake News On CBC? Who Funds This Nonsense?

When a government news agency promotes false information to subvert a government scientific safety decision, it is time to re-evaluate their role and if they should even receive government support.  Their November 6th 2017 interview is a shameful distortion of facts, evidence, and directly opposes the science-based decision that government regulators made.

As usual, the object in question is glyphosate, the low-toxicity herbicide that has been used for about four decades.  It has been recognized for its low toxicity by 100 world governments, most that did their own independent evaluation. It has a reasonable half life in the environment, low environmental impact, and efficacy against a wide variety of weeds.

But there is a movement afoot to take this safe and useful chemical away from farmers, municipalities and homeowners.  It has been a carefully orchestrated misinformation campaign driven from many angles. 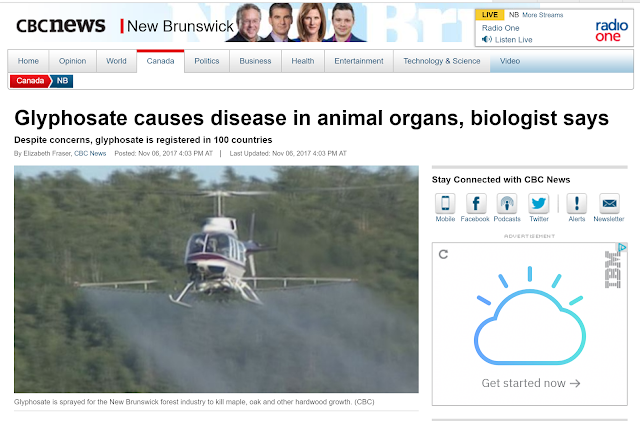 The article on CBCNews states clearly that a safe, well studied herbicide "causes disease in animal organs."  There is no sound, reproducible evidence to support this, especially at concentrations used. The claims are made by Theirry Vrain, a former scientist now exploiting his past credibility to sow doubt and push shameful misinformation.

The  opening sentence is just false.  "Glyphosate accumulates in all our organs " says Theirry Vrain.   Someone should revoke his scientific credentials.  There is no evidence to support this position, he is making up information with the intent to scare.  He's using his position as a former government scientist and doctorate holder to spread false information.

It is nothing new. I've reported several times about his boring and outdated campaigns that make claims based on his 1980's understanding of the technology, a cursory understanding of science, and the stuff he just makes up.

Glyphosate does not "accumulate in all organs".  To the contrary, it is water soluble and passes rapidly through the body in stools and urine, with a small amount broken down in the liver by cytochrome p450 enzymes that do that do that sort of thing.  It's pharmacology is well established, and kinetics well documented.  In fact, recent papers have shown that you can accurately estimate occupational exposure by interpreting urine levels.

On top of that, there is almost zero exposure. It is detected on raw, harvested commodities in low parts per million, that's tens of thousands of times below physiological thresholds.

He says that there have been no trials in humans, which shows his contempt for the rules that govern tests on human beings.  When there is no plausible mechanism of harm, and no reliable evidence from animals, and no evidence of harm in humans from epidemiological assessments, why even go down that road?

Because it is about scare tactics. Period.
Vrain then says that glyphosate causes cancer, kidney disease, liver disease and obesity, all based on rather flimsy studies that were never repeated, and all performed by the usual suspects (the people that always find problems and never follow up with any further study).  Nobody else follows their work either.

Because it is not real.

The article says that the herbicide is "registered in 100 countries" and fails to recognize that each country does its own evaluations, and none of them have concluded that this compound is harmful.

The article says that the "water and cancer" agency of the WHO say it is a probable carcinogen.  That is a highly disputed conclusion made by the IARC, an agency that made this controversial conclusion after ignoring a tremendous body of data that did not support the conclusion, and basing the conclusion on a few data points, some from well debunked papers.

The CBC gave its power to someone willfully distorting evidence.

Canadians should look carefully at this.  Someone is lying to you-- either the regulatory agencies or the news service that interviews and extols the rants of an known activist that makes empty claims about well established science.