About two years ago the internet erupted with a cool kickstarter campaign.  The Glowing Plant Project claimed to want to create trees that would light the streets. The concept spread quickly, with prominent pieces on major websites that stoked contributions to the project.  It would ultimately raise $484,013.

Years later there are no glowing plants even in service as dim nightlights, let alone illuminating our cities.  The overselling of this concept was recently reviewed by Antonio Regalato at MIT Technology Review. 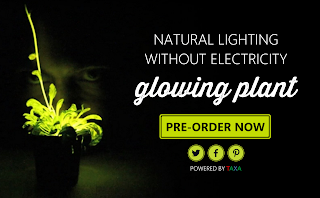 Natural lighting?  That implies using it as a light.  Not quite.

Today's blog expands on the comments made in Regalato's wonderful article. The Glowing Plant Project thrived on the hype, and did not do itself any favors with a few bad moves that I feel were a bit deceptive, and in the long run, it could have a very negative impact on the perception of edgy science at the public interface.
Even today the website makes a very strong claim, and presents a picture that must be an artistic rendering or an enhancement of any minor glow that would be captured with long exposures. It is likely GFP, which is a much simpler solution but not "glowing" (producing its own light).  GFP "fluoresces", that is, it gives off light, but only after you excite it with energy. Big difference. 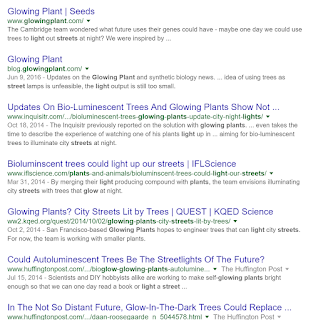 The hype is deep, the results disappointing.

The Concept
It is completely feasible to add the hardware that makes fireflies and jellyfish glow, thereby giving the plant the materials to make a few photons.  It has been used to monitor plant behaviors with highly-sensitive cooled CCD cameras. However, there are some extreme limitations that break the reality of lighting streets, or even dim rooms, that have been obvious to me from the start.

The bioluminescence they speak of is actually quite old technology in the lab.  It is a tool available to scientists for decades. The enzyme luciferase (from "light giver" enzyme) mediates a chemical reaction in critters like fireflies.  It is a two-step reaction requiring adenosine triphosphate (ATP) and oxygen (two things a plant has available in some amount) but also requires a chemical called luciferin.  Luciferin is synthesized by fireflies and some other bioluminescent organisms, but you don't see it in plants.

The plants would have to manufacture the luciferin, which would be a feat of metabolic engineering, at least to make the high levels needed to sustain a glow visible to the human eye.

There are some important constraints to consider.  When one molecule of luciferin is combined with ATP, it creates a compound called luciferyl adenylate and pyrophosphate. This compound then reacts with oxygen to form an energetically excited compound called oxyluciferin which then fires off a photon of light to regain its ground state.  There's more to it, but that's the skeleton. Invest ATP, oxygen, and a non-resident chemical called luciferin to produce one photon.

Room lighting typically runs at 20 micromoles (2,000,000,000,000,000,000 photons) per square meter, per second, so you can have a handle on the number of chemical reactions and the amount of factors that would be required to pull this off.

I have practical experience with this system.  Back in the early 1990's we'd hook up gene regulatory sequences to the luciferase gene (the blueprint of the protein) to test if these regulatory sequences functioned in plants.  If they did, the gene would be turned on, the plant would make the enzyme, and we could take plant powder and test for luciferase activity.  We'd crush the powder in liquid nitrogen, then incubate it with luciferin and ATP.  You had to work fast, and keep things cold. There was no visible glow of the powder, even in the darkest darkroom.

To test the powder we'd load that reaction into a luminometer.  The machine has an extremely sensitive photomultiplier or photodiode that can detect photons at 10(-21)-ish level.  It is much more sensitive than the human eye by a longshot. There we could measure the spritz of photons emitted.

The other issue is the chemistry of the reaction.  Luciferase activity is down-regulated by its own products, meaning that you can't generate a lot of the intermediates without impeding the process. This is great to measure a snapshot of gene activity in a luminometer, but not great to light a street.

It seems like some fundamental limits of the system were not well considered when the campaign was initiated.

The images used on the website looked strangely familiar to me. I was really disappointed to find the original images.  The glowing plant they show on their t-shirts and other swag is not their work.  It is not a plant they created, and they do not credit where the photo was originally posted.  The original work was done by David Ow and colleagues in 1986.  You can see that paper and the image here. 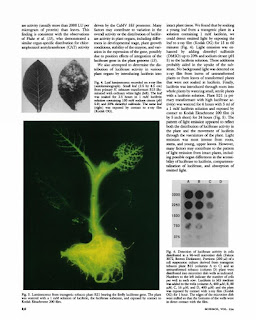 It seems a bit slimy to use that image on t-shirts and the website without a clear statement that it is not their work.

In fact, the image was produced by watering a plant transformed with the luciferase enzyme with a solution containing luciferin, waiting six hours, and then laying the plant in contact with a 4 x 5 inch piece of Kodak Ektachrome 200 film for 24 hours, as cited in the above-referenced manuscript.

The group has now moved to raising cash for this campaign using Wefunder, which sells shares in a company rather than just committing cash.  From the company's Facebook page it is evident that they are exploring other options, such as a fragrant moss, which is beyond feasible, as plants make lots of volatiles we appreciate. Maybe they can use these more do-able projects to salvage a broken campaign and some fractured trust.

This Kickstarter campaign reminds us that there is an excited community that wants to get cozy with synthetic biology and novel solutions to human problems. That's a good thing.

Maybe there's a little sour grapes in there too, because I see so many great projects in so many labs that can solve actual problems, and $20,000 would be a huge help. These projects remain underfunded, but are real, do-able and have public benefit.

And that's the best punchline.  If we're going to continue parlaying this excitement in biology into new frontiers, we need to deliver on our promises. This visible Kickstarter campaign began with an idea that was scientifically DOA, yet captured the curiosity of many.  The marketing arm, use of others' images and enhanced photos, is not the way to build trust about public investment in technology.

In the end, I'd be glad to be proven wrong.  I'm a geek too, and have a soft spot for those that think out of the box.  But remember, we're dealing with the public's trust.  It is a fragile thing.  It is hard to earn and easy to lose.