For years I've had to make that clarification.  I'm not pro-GMO.  I never would characterize myself as pro-GMO.

Last week Mark Lynas and I answered questions for an audience in Belfast, Northern Ireland. At the end the moderator polled the audience for who was "anti-GMO" and who was "pro-GMO". Mark and I sat quietly and did not raise our hands. 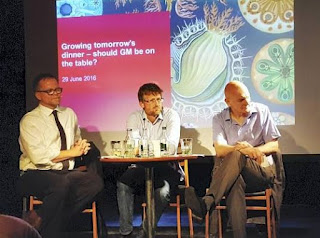 That's me, Mark and Prof. Chris Elliot at the event in Belfast.


The moderator quipped, "Obviously both of you are pro-GMO."

Mark and I both rejected that categorization.

As a scientist, I find such terms of ideological grounding quite troubling.  Genetic engineering is a technology.  I can think of good applications, I can think of evil applications.  My synthesis of four decades of literature and a deep understanding of the technology says that the applications have been overwhelmingly positive.

Consistent with the recent interpretations of the National Academies of Science, there is no evidence of health problems, no plausible mechanism for health related-issues, and environmental concerns that must be monitored and addressed.

Also, my views could change later today if evidence is presented.

Most of this blog's readers likely feel the same way-- that we want to understand technology and stand by a scientific synthesis.

But remember, this is a question of perception, especially to the folks on the fence that are not sure what to believe.  You are less likely to earn their trust by taking any position that seems ideological.

Dr. Steven Novella came to a similar conclusion recently.  He said something like, "I'm not pro-GMO like I'm not pro-UFO... it all boils down to evidence."

Remember, this is about communication, and taking a side can alienate us from those that want to understand the science.  It is our duty to be objective, fair and scientific. That has no pro or anti side.