A subset of the panel that met to synthesize the science on genetic engineering in crops convened at the American Society of Plant Biologists 2016 conference in Austin, TX.  Drs. Robin Buell, Rick Dixon and Neal Stewart discussed the results and process of the panel's conclusions.

There were 20 people on the committee from diverse backgrounds and looked at a wide variety of literature and testimony.  Testimony came from "individuals who have been directly involved in, or who have special knowledge of the question" and they were charged to examine "all credible views".

The committee examined relevant literature, over 1000 publications, saw ~80 personal interviews. Interviews were conducted with many non-scientists with strong anti-GMO views. The entire process was transparent and all information presented was available to the public. Any member of the public could access the information.  All of this was a first for a National Academies Report.

The central synthesis is that there is no easy differentiation between genetic improvement methods. Any method, including traditional breeding, mutation breeding, transgenics, all have an equal potential to produce deleterious outcomes.

Environmental, health, social and economic effects were considered in the synthesis of the report.

Outcomes were from a consensus of 20 diverse individuals with a range of scientific sophistication:

Yield increase rates are not affected on a large scale from biotech plants. However, genes were not added to increase yields, plants were changed so farming can be more predictable and cost less. 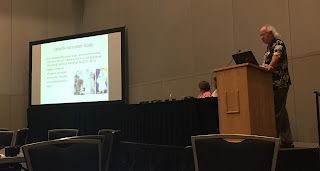 The Seralini rats make an appearance in the discussion.

Social and economic effects were discussed, and concluded generally favorable economic impacts for farm producers, but there was a lot of heterogeneity in the data.  One issue is that traits are stacked and that not all farmers want stacked traits. There is a difficulty to find some kinds of non-GE seed in certain crops. Future considerations need to be considered with respect to patents, regulation and other product restrictions.

There is concern about how gene editing may be over-regulated.  It is a powerful and successful technology with huge numbers of studies emerging using it.  Cebus has even generated a CRISPR-based herbicide tolerant crop.

The committee also looked to -omics technologies and how they might work in helping with the safe and effective regulation of genetically engineered crops. Can such technologies be used to really define the composition of plants to ensure more confidence in their safety?  There was a discussion that the public sector could do this job well.

Predictions suggest that there will be great strides in disease resistance and output traits.  There will be gains in forage crops and crops generated for biofuels.  The long-term reality and environmental impacts are of course not known, but will always be considered.  There also was a recommendation that the pubilc sector play a bigger role in commercialization, and also funds available for examination of potential problems.

The final synthesis is that it is about the product, not the process, and that the safety focus should be most focused on novel traits. Also that -omics technologies should be used more frequently in safety assessments to have a greater confidence in product equivalence.

The strength of the report comes from its careful language and nuance. There's no evidence that it will solve every problem and no evidence that it is dangerous. The technology has strengths and limitations and when we discuss it we need to consider evidence carefully and look at individual traits.

This work is a tremendous synthesis from a massive amount of information and a lot of hours from experts in the field. It was a landmark report that will stand as a part of the history of this discussion.