I was extremely fortunate to be attending the Crop Connect Conference in Winnipeg the same day that Seeds opened.  I mean, how often are you in canola country, at a canola-heavy conference, and get to see a play about canola? Plus, I've been through these court records and know that story well. A small outing of farmers, canola industry folks and a scientist or two headed downtown and take in the performance at Prairie Theater Exchange. 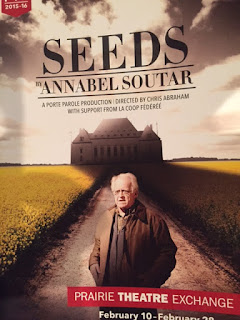 Seeds is a play written by Annabel Soutar.  It chronicles the Percy Schmeiser affair, the story of a Saskatchewan canola farmer that was sued by the Monsanto Company because he was illegally growing genetically-engineered canola off license. The popular activist internet myth that likely seeded the script says that Schmeiser was the innocent victim in a classical David vs. Goliath episode, that company thugs sued him for a few seeds blown onto his property. Yet actual court records tell a story of a guy that illegally obtained technology and then planted over a thousand acres of it, using plenty of Roundup herbicide to select for engineered plants.  He was found guilty and lost again on appeal.

On its surface the story is a challenging one to develop into a compelling live performance, especially as the author attempted to keep the dialog close to actual court records and documented conversations. However, the work has a groovy halo coming in, as a typical arts community would likely be thrilled with a play trashing the Big MON. The creepy way science is portrayed had the audience pulling for the little guy going in. 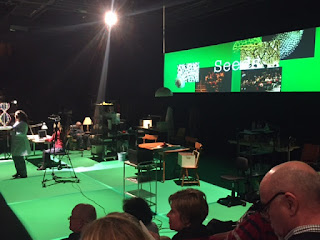 The stage was a clever mix that switched between Schmeiser's home, courtrooms and fields. It always had an eerie science glow about it.

Despite the inherent limitations, the director pulled off an interesting performance by juxtaposing fast changes, lines from interspersed characters and quite a few laughs. Video screens behind the stage presented additional information and added context to the scenes.

The cast was sharp and convincing, with some playing multiple gender-bending roles.  One well-bearded actor donned a sari and admonished others as Vandana Shiva.  The forth wall was never a fixture.  The fast costume changes, slick blocking and solid acting throughout were a lot of fun from a performance perspective.

The problem I had was in how Soutar and the director chose to tell this story.  Company people were always sleazy, brash and angry.  Scientists were portrayed as numbskulls, except for the ones that (history tells us) truly were the numbskulls, and they were given great credibility in the script. They echoed the common false claims around genetic engineering. These probably came of as credible and reinforcing to theater goers that only hear the Chipotle/Food Babe warnings about crop technology. If the writer actually interviewed any of the millions of scientists familiar with the technology those lines were not included. Their words would have been consistent with the company’s claims and made Goliath look like a genius. That play would have been over in twenty minutes.

So rather than spend more time on the scientific evidence that discredited Schmeiser, the writer takes an ad hominem approach and goes after him by attacking his character with personal interviews of people in his hometown. Most seemed to impeach his credibility, and others claimed to have sold him the illegal seeds.  The author wanted to pose the thought that maybe David’s crushing by Goliath just may have been deserved.

But it didn’t need to go after the man’s credibility, because the science knew the facts about the seeds.  The evidence showed that he planted traited seeds over 1000 acres and used glyphosate to select for tolerant plants.  Goliath was right, as courts would determine.

However, that’s not the take-home message from the play.  The conclusion left the question open. It brought into question the patenting of life, the control of seeds, and the role of corporate venom in going after the little guy.

You didn’t walk away feeling like this was a crime solved.  Instead, the author threw a blanket over the chalk outline, the smoking gun and shell casings and in a closing soliloquy asked the audience, “What do you think?”  Most non-scientific theater goers likely walked away feeling like the big bad company harassed some poor schmuck, and that that poor schmucks should get to save seeds on their land.

The whole night was extra fun because the real-life version of one of the characters in the play, Trish Jordan from Monsanto Canada, was present in the audience along with our group.  She was quite pleased that the character was articulate and the "actress was gorgeous" and felt the portrayal was pretty solid.

That said, I wonder what the author would say if I recorded the play with my phone and then sold copies online.  After all, I did have a paid ticket…