A Frosty Mug of Glyphobia

When the news broke across the internet that beer was contaminated with glyphosate, my first response was to crack a cold can of Sierra Nevada and read the story.

Or perhaps not.  Once again, we are reminded of two basic rules. 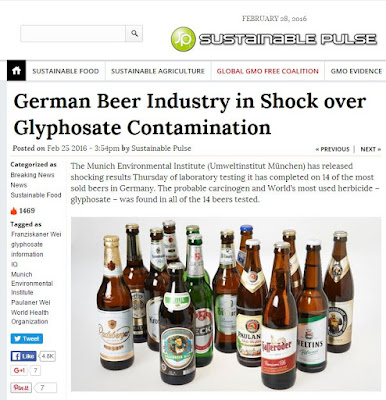 Beer contains high amounts of a potent carcinogen that accounts for a tremendous number of deaths each year.


1. We are extremely good at detecting extremely little.
2. The dose makes the poison.

How much glyphosate is there?  Well according to this analysis: 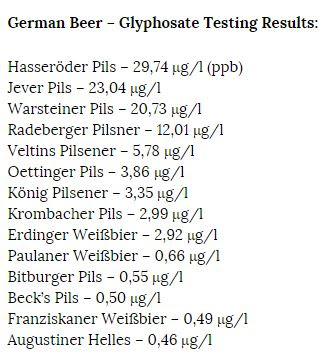 Yikes! Herbicides are detectable in my beer, and what's scary is that we can actually identify molecules that are almost not there.

According to these data there is somewhere between 460 parts per trillion (equivalent to one second in seventy years) on the low end and 29.74 parts per billion (about one second in a year).  That's not scary, that's remarkable that we can detect something at those levels.

I didn't see the data or methods, and I have not been able to find them on the interwebs. This is not a published, scientific work, but since when does that matter?  This isn't honest science, this is fear mongering.

However, I do believe that these levels are within the range of detection, and quite possibly legitimate, as glyphosate is used on grain in Europe.  The grain is not GMO. Glyphosate is used as a 'harvest aid' or herbicide applied to the crop to ensure that all the grain is dry at a same point at harvest.

So let's assume that these data are reproducible and spot on. Should you stop drinking beer?

At the highest dose detected (30 ug/L) you'd have to drink a lot of beer to get to anything close to a physiologically relevant dose of the herbicide.  According to the German BfR, you'd need to drink 1000 L of beer in a day to hit acute toxicity levels.

I don't know about you, but I lose my motivation for drinking beer after about 4 L in a sitting.  That's 0.4% of the level needed to get effects from glyphosate in the worst-case scenario.

But there are a couple of other notes worth mentioning.  The use of glyphosate means that other harvest aids (paraquat or gramoxone) with much higher acute toxicity are not used.

Also worth noting, alcohol is the most dangerous chemical in beer. According to the CDC, 10,000 ppm (or about a week out of that year) will kill you. 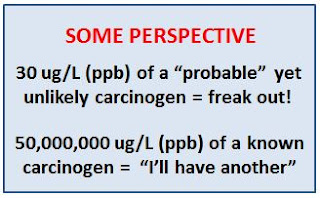 The point is simple.  This is more fear mongering. If these folks really cared about carcinogens in the diet they'd be writing articles about the beer itself and the dangers of alcohol-- in obfuscating acute choices and contributing to disease through chronic addiction. Instead they focus on a molecule at the foggy edge of detection, using it to scare concerned people away from modern farm technologies.