A Protest Over Bananas in Iowa

Monday, a group of well-fed students and jumpers-on will march with signs. In a world full of actionable atrocities, these folks have centered their time and energies on a scourge that threatens the progress of mankind-- A dozen ISU students will be paid to eat bananas that carry a banana gene that allows the fruit to produce beta-carotene, a precursor to Vitamin A.  The orange stuff in carrots. 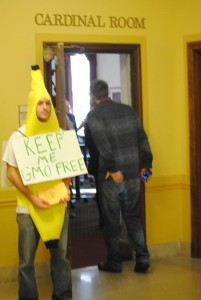 An apparently vitamin A sufficient and sighted student dons a banana costume to protest bananas being developed to provide nutrition to the developing world.  A passer by checks out the happenings, then rubs his butt in confusion.

One year ago I was in Ames, IA at Iowa State University.  The banana trials were supposed to begin then, and the story was on the lips of students and faculty.  Twelve lucky students would get $900 to eat bananas and then have their blood monitored for Vitamin A bioavailability. Five-hundred students answered the solicitation.

Why is this happening at ISU, a place not traditionally thought of as a banana mecca?  It is because of a Food Science professor, Dr. Wendy White. She's a world expert in measuring cartotenoids in the blood, and interpreting their many forms.

She was assigned these trials because she is the expert in that area.  If you are going to feed Vitamin A bananas to people, it helps to know that the Vitamin A produced is in a usable and bioavailable form. Dr. White had absolutely no interest in genetic engineering or the controversy, but immediately found herself at ground zero.

It's a year later and I don't remember all the details, but she mentioned protests, threats, and lots of nastygrams.  Dr. White is soft-spoken, sweet and kind.  She has top-notch students that are great to talk to and are excited about science. She does not understand, or deserve, the grief for simply doing the work she is recognized for doing well.  Plus, these experiments could help those suffering from vitamin A deficiency, and provide the up-front testing that critics say does not happen. 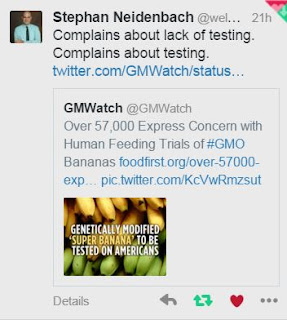 Stephan pretty much nails it.

The bananas make more beta-carotene because of the installation of a banana gene. Dr. James Dale from Queensland University of Technology developed the new banana, transferring a gene from a wild banana from Fiji to the bananas consumed as daily food in Uganda and other parts of Africa. There they might represent 70% of the dietary calories.

You can hear Dr. Dale talk about it on my podcast, here.

The news says that protesters have a petition with over 57,000 signatures condemning this test.

I'd love a copy of that petition.  I'd like to have the names of people recommending denying access to life-saving nutrition and access to agricultural innovation to Africans.

Someday when health problems are solved with a banana that delivers the nutrition of a carrot, I'd like to send them a note reminding them that their privilege stood in the way of progress that saved lives.