February 15, 2016
There was a spirited discussion on Twitter about yesterday's blog.  I pointed out that Iowa State University had a faculty member that is an expert in cartotenoids and their bioavailability.  She was given the task of testing the soluble levels of beta-carotene from the genetically-engineered banana that contained this nutrient.

In response to her being asked to perform this test, a petition circulated and 57,000 signatures were gathered.  Today there will be a protest/delivery of the petition.

The discussion on Twitter was basically one woman hurling insults at me and telling me that what I posted was not true, that I need to "get on Google and do some research", and that I'm just an industry lackey.  She insisted that I respond to "the questions from students" which I'm happy to do today below. 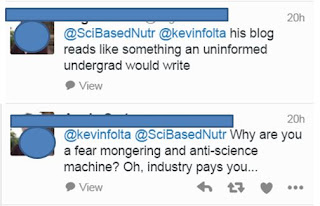 I'm happy to answer the questions for this Twitter-er.  I suggest you do visit Twitter and enjoy the entire dialog.  My guess is that since she's sure I'm just an industry shill, my answers won't matter much anyway. However, true to my word, I'm glad to take a stab at it. And for the record, I'm 100% publicly funded, and grants can be seen on my research website.


The questions were a breeze to answer. The bigger issue revealed is two-fold.

1.  These questions come from people that do not understand how science works.  The experiments at ISU set out to test a hypothesis, that consumption of beat-carotene enriched bananas would increase the serum levels of vitamin A and its precursors, and understand the time course. That's all.

2.  An anti-genetic engineering movement must stop any steps where this technology can show to have potential benefit and minimal risk.  The tests at ISU are just one step in the process of deployment of this technology. Before materials are deployed, it is good to know if the technology makes sufficient amounts of bioavailable compounds.  This test can determine that.  Therefore, some feel that it must be stopped.


I don't speak for ISU or the researchers performing the experiments. However, at the insistence of the Twitter-er, I'm glad to provide my answers to those questions.


Question 1
Give a brief explanation of why you are here, your area of expertise, and how you can apply your expertise to this critical dialogue.
KF:  I've been a public scientist for almost 30 years and currently work as a Professor and Chair of a leading fruit and vegetable department in a major US Land Grant University. My background is in molecular biology and genomics, and I work directly/indirectly with many crops in the nation's #2 horticultural crop state. I've read extensively on biofortification and metabolic engineering of crops for increases in folate, beta carotene, and other vitamins.
Question 2
Do you think this banana will impact the issue of malnutrition, and the connected issue of hunger, in Uganda and East Africa? If so, how? If not, what alternative solutions might help address these issues?
KF:  This has nothing to do with the hypothesis to be tested. The experiments are designed to examine bioavailability of beta-carotene and its derivatives from consumption of biofortified bananas.  However, I can answer.  Bananas are used for cooking in Uganda and areas of East Africa.  They are a daily staple for many and are threatened by diseases. They also are deficient in key nutrients. Genetic improvements for disease resistance and nutrient content could have positive effects on malnutrition.  At least the governments of these countries seem to think so. They all have extensive programs in these areas. Transgenic bananas have been demonstrated to be resistant/tolerant to banana bunchy-top virus, black sigatoka, Fusarium, and Xanthamonas, as well as produce more beta carotene.
Question 3
There are concerns that the design of this study is inadequate, particularly testing these bananas on female ISU students who are not the intended target of these Vitamin A enriched bananas. Given this critique, how was the research designed and how have safety concerns been addressed? (If you are not involved in the research process for these bananas, what concerns, if any, do you have concerning the safety or validity of the testing procedure or the potential impacts on the intended recipients in Eastern Africa?)
KF:  The experiment is designed to examine bioavailablity of the compounds from bananas consumed.  The toxicity thresholds for beta-carotene is well understood, as is the level of beta carotene in these bananas. There are no unique safety risks. "There are concerns" is not a scientific question. What are the concerns?  What is the plausible hypothesis that suggests unusual risk?
The experiment does not directly have any impact on recipients on Eastern Africa.  The experiment is to test the bioavailabiltiy of beta carotene from bananas carrying beta carotene.
Question 4
Ideally, how should public universities be involved in GM biofortification and human testing? And to what extent is transparency, particularly regarding control or ownership of these technologies, important, particularly when dealing with staple food crops?
KF:  You are asking my opinion, so my answer is not based on data, it is what I think. I think the universities are the optimal systems to develop and test such products.  Transparency is always important.
Question 5
Finally,  what critical issue or issues concerning this study have been left unaddressed or inadequately discussed thus far in our conversation? Perhaps consider your closing perspective on the issue.
KF:  The experiments at ISU are designed to test the bioavailabilty of beta carotene from bananas consumed.  For the experts at ISU, this is a relatively simple test that can quickly yield answers.  If the compounds are not bioavailable in physiologically-meaningful levels, then there is no reason to continue, or new plants with higher beta-carotene expression need to be devised.

Closing perspective- Dr. White is an expert in carotenoid bioavability. She understands the enzymes and processes in their synthesis, conversion and measurement. She is the best person to examine the question if beta-carotene is available after bananas are consumed.