The Causes and Cures of Autism, at Autism One

The Autism One conference is taking place this weekend in Chicago, IL.  From reading the titles and abstracts, this is best described as an autism conference that caters to practical advice about management, treating and living with the disorder. Many of the talks would probably be very useful to those on, or with loved ones on, the autism spectrum.

However, there is no question that the majority of the information appears to be non-scientific, emotional quackery. Autism One conference is clearly the exploitation of a disorder to make a buck and/or force an agenda.

It is a place where you can cherry pick your own causes and cures, with claims coming from self-appointed experts to MDs.

They forbid photos, video or audio, in the sessions or anywhere in the meeting.  They control who can register, and remove anyone that even begins to raise their suspicions of not being part of the club. 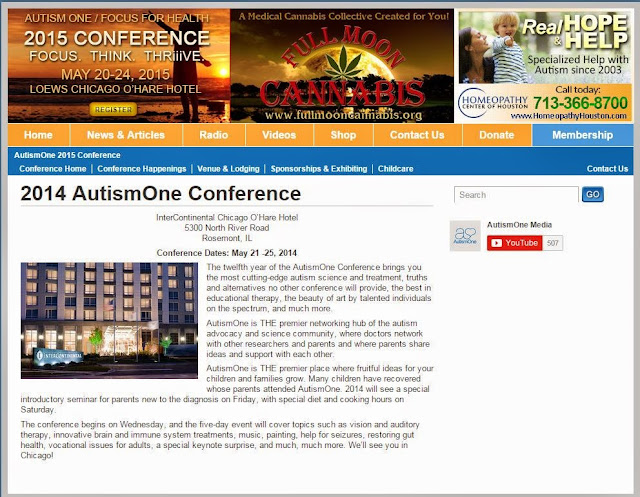 Looks like fun, cannabis and homeopathy targeted to treat autism.

In the past they have featured Andrew Wakefield, author of the fabricated autism/vaccine relationship.  He's still a darling of the group.  Jenny McCarthy received standing ovations in front of this group at one time too.


One of the keynote speakers is Sayer Ji, the guy from GreenMedInfo, the website that publishes stories that make claims that are the opposite of what the authors actually say.  When one of your keynote speakers is a clueless spin master, the medical advice might be questionable.

But the best part is that there likely will be a battle brewing between those that claim causes and cures.  The schedule shows clearly that there's lots of emphasis on causes, which the scientific literature suggests is genetic in its basis, yet potentially activated by environmental triggers. The literature also states that it is a developmental disorder that cannot be cured.

But don't tell that to the speakers!

Dr. Stephanie Seneff, a computer staff scientist at MIT, is presenting and she's done what thousands of medical researchers failed to do-- she's found the cause of autism. 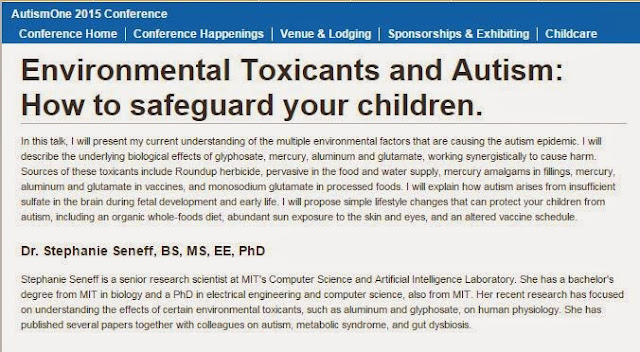 She has pinpointed the cause of autism!  It is these four things, two of which you never are appreciably exposed to, one that your body makes lots of.

And of course, she's claimed that you can cure autism by feeding kids organic food.  Good times. 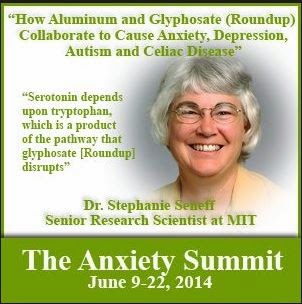 The cause of autism.  And anxiety.  And depression. And celiac disease. Cool that this one computer scientist managed to figure out what tens of medical researchers could not.

There is plenty of blame in the abstracts, plenty of notes about the problems from vaccines, and lots of "environmental chemicals".  Seneff and Zen Honeycutt (author of the blog that puts up manufactured data, that they defend to this day).

Kerri Rivera.  She's the one that claims to cure autism with bleach enemas.  Kids consume Miracle Mineral Solution, or MMS, a mixture of chlorine dioxide, citric acid and sodium chloride. Apparently they kill some slimy intestinal parasites that cause autism.  She learned the cure from Jim Humble, a former scientologist that left that cult to start the Genesis II Church of Health and Healing.  He claims to be, and probably is, a billion-year-old god from the Andromeda Galaxy, a place where autism is rare and a good Chlorox enema is a daily ritual.

It also cures malaria and the AIDS.

I almost want to go.

The whole event is especially sad because it misdirects our thoughts and energies away from real causes, real solutions, and legitimate remedies for the families affected.  I know a few.  They hate these non-scientific events, as they feast upon the dreams and hopes of family members to help loved ones suffering with the disorder.  They offer non-medical, perhaps harmful solutions, that can't work, and can become financial burdens on families desperate for a hint of improvement.

However, in reading their website I found that one of the fun social events will be a karaoke night. 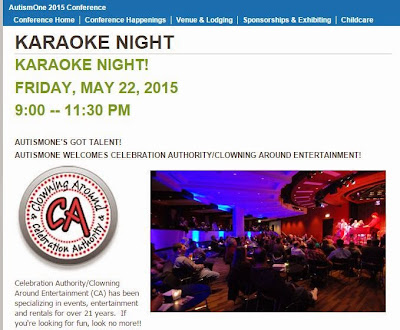 The best part of the Autism One Karaoke Night is that you can make up your own alternative lyrics, and the crazier they are, the more likely you'll get everyone else to sing along.

I tweeted that last line earlier today, and they were happy to retweet it... 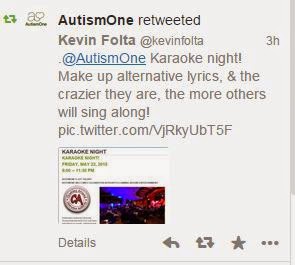