MAMyths: Standing Up for Science

When I heard about a counter protest for March Against Monsanto, my eyes kind of glazed over and I didn't think it was the best use of time.  After all, providing a counter to something that makes no sense sometimes can lend a hint of legitimacy to a bogus cause.

Plus, my grass is 3 feet tall, and I've slept in my own bed 50% of the nights this year. While a science outreach trip to Chicago would allow me to visit my dad and hang with science friends, I thought this issue was best dealt with from Gainesville, FL with a good internet connection and a pitcher of scotch.

I'm glad to report, that I made the wrong choice. 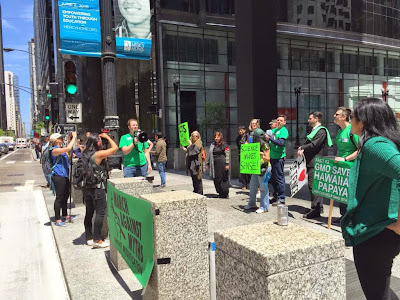 This makes me happy as a scientist, as these folks will squarely land on the right side of history.

The pictures from the scenes across the nation showed small clusters of MAMyths supporters out with signs, standing up for science.  The best part was their apparent softness, the repeated theme, "Ask me about GMOs."  These were scientists, and science fans, out sharing science, and there is some real magic in helping people understand facts instead of fear.

It was outreach in action at ground zero of insanity, a potential to reach those that cannot be reached and hopefully influence the folks in the middle. 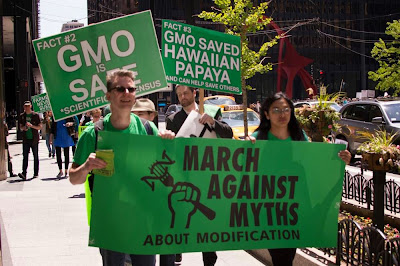 March Against Myths About Modification
Standing up for science.

I'm overwhelmingly proud of Karl, David, Kavin and the hundreds of others that took part in MAMyths.  It was not a stand against a good technology and contrived corporate demon-- it was a stand for science and reason.

It did not take long for the internets to start screaming "shill".  Twitter erupted with claims that MAMyths participants were actors, paid by Monsanto to impersonate a movement. 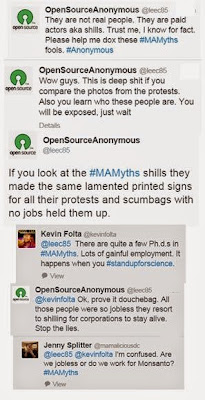 Some of us just had fun playing from home. It didn't take long for the nasty to emerge and the usual "shill" accusations to blossom.


Others criticized the small participation compared to the thousands of fools that spent a Sunday maligning a technology that has proven helpful for farmers and the environment. Chain smoking, tattooed hipsters lying on the ground in bee suits outnumbered MAMyths protesters three to one.

I would rather stand shoulder to shoulder with one honest person, than march among a throng of the ignorant.

Good job MAMyths, and thank you for standing up for science.

Monitor the continuing conversation, and take part on twitter using the hashtag #MAMyths.