Grandpappy Folta once said, "When someone gives you an opportunity to see what they are about, pay attention."

He was right. The true measurement of character and someone's real agenda oftentimes are presented at shimmering moments that reveal quite a bit.

Such is the case of the Huffington Post article by Michael Hansen.  For those that don't know Dr. Hansen, he's a guy with a science background that works for the Consumer's Union, and never has much nice to say about biotech.  I actually got to meet him a few years ago at the Hofstra Pride and Purpose debate, and we had a nice dinner together. I felt bad for him in that he seems to have a stick-to script and a deep self deception that makes him immune to actual scientific discussion of data. Watch the debate. You'll see it oozing everywhere.  He sounds more a politician than a scientist, as you can see by his manipulation of pseudo facts and dodging questions.

Here's the part that anyone on the fence with the GMO issue must read.  When they have to fool you with statistics by misrepresenting them, should you believe anything they say?

The same kind of bendy word choice and hysterical reasoning is reflected in this passage from his May 29, 2015 article in Huffington Post.

I've seen this statistic circulating a lot lately, especially the "17-fold increase between 1996 and 2012".   Yes, that certainly is an awfully huge increase!   Scary eh?

What he forgets to tell you is that prior to 1996 glyphosate use was confined to some farm, residential and municipal use. There were no glyphosate tolerant crops in 1995, so the amount of stuff used on glyphosate-tolerant crops would probably be pretty low, like none.

Once these crops were introduced and proved helpful for farmers, the technology was rapidly adopted. You might expect a rather dramatic increase.  Of course, he neglects to note how that horrible 17-fold increase led to a concomitant decrease in the use of other herbicides, less fuel use, less labor, less tilling, less soil loss, and more profits for farmers.

Of course not.  That's inconsistent with his agenda. 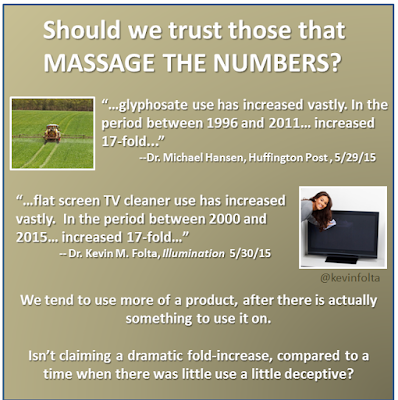 Here's a little version you can cut and paste in a bathroom stall at your local Chipotle.

But what should we learn from this?

In a time where the anti-GMO movement realizes that the science is tight, and that plants are safe for humans and the environment, the new target is the herbicide used in their cultivation.

Hansen simply augments this fear, playing along with the newest salvo in the flat-earth science that now wants you to think that there is a deadly herbicide in everything you eat, in every glass of water, or every bottle of breastmilk.

If they have to bend statistics to frighten, why do people believe it?

Because it reinforces their beliefs.

Don't fall for it.  Point out the simple reality that what appears to be a dramatic increase is actually a step forward, and that every big change is not so big, if the denominator is close to zero.
at May 30, 2015