When I Was a Waiter- My Brush with Celebrity Greatness

Tonight I was reflecting back on times when I was a waiter.  It was back in the late 1980's when I was in college in DeKalb, Illinois.  DeKalb was about 70 miles west of Chicago, and probably still is, but I haven’t measured it in about 30 years.

I was in college at Northern Illinois University.  In fall of 1985 I kept a job from 8PM-3AM working for Domino’s Pizza.  It was good money, not great, but I got to meet every crackpot, stoner, and whackjob in DeKalb, as well as was invited to lots of parties after the shift. Good times.

It was fun for about two semesters.  I moved back to my parents' place and worked the summer at Domino's near their home. That same summer I found a job shuffling Mexican food to tables at Annie’s Santa Fe in Oakbrook Center, and arranged to work there during the school year.

This place was an hour drive, but I could make real money working Wednesday night 5 to close, and 10AM to 11PM on Saturday.  It was in the ritzy end of Chicago's western suburbs, so folks were willing to drop a few shekels on their eager servant. There was never a dry glass, empty coffee cup or finished plate on the table for more than 30 seconds.

I was earning money for school, but also was developing a blend of organization, people skills and hustle.

It was fun too, mostly because I worked with true professionals, seasoned waitstaff that took pride in outstanding service.  I’ll never forget Leslie B, Elaine, Betty, Leslie S (the most gorgeous soul under the sun), Mary, Lisa Z, and other names I can't remember, but people I could draw with the help of a police sketch artist.

There were two bar tenders named Kevin, and a manager named Kevin, so to limit confusion, I took a name tag from the drawer that used to belong to a Hispanic employee long gone. My name tag said, Ramone.  I rolled with it.  It was the guy on Fast Times at Ridgemont High as well as the last name of the four guys in one of my favorite bands.

On a good Saturday I'd drive home with $200 in cash, a massive jackpot for a college job in 1986.  I also would pick up shifts busing tables, working in the service bar, working the cooking line, or cleaning floors. Whatever it took. I remember shoving envelopes full of singles into the ATM late after midnight when my shift was over. An hour's drive later I'd get home exhausted, reeking of grease, fajita stink and industrial cleaners.


The best part was that Annie's Santa Fe was adjacent to Drury Lane Theatre and Butler National Golf Course, so I had the opportunity to hob-knob with celebrities, or at least bring them their food. 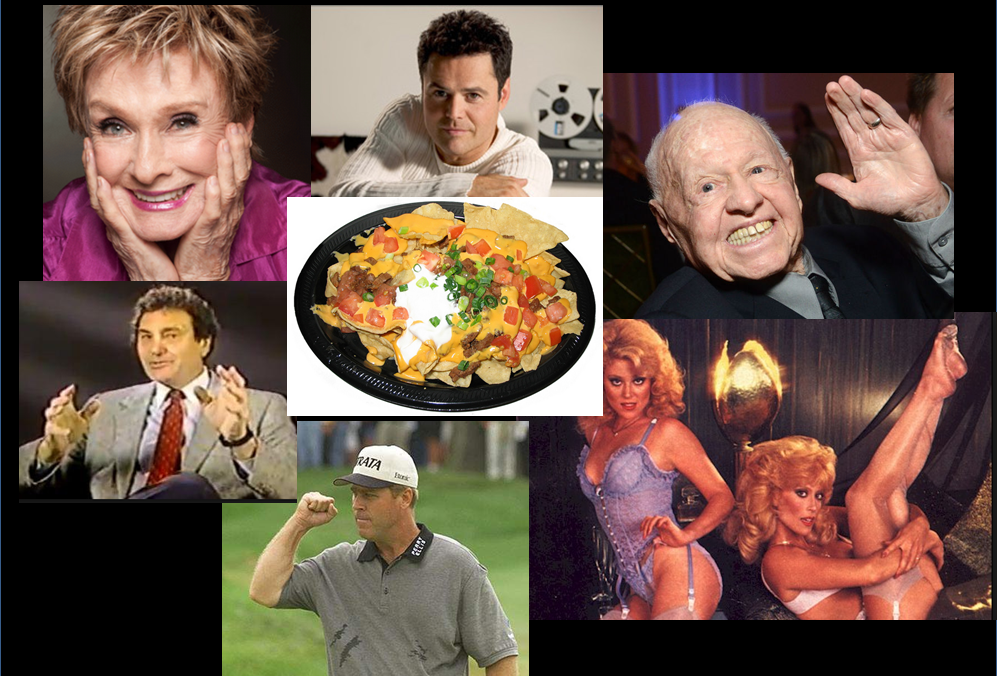 I actually was Cloris Leachman's waiter, also pro golfer Hal Sutton.  Al Piemonte the "TV Ford Dealer" was a regular with his family.

I was waiting on two really attractive women and someone told me that they were the Landers Sisters, Audrey and Judy, from television-- regulars on the Charlie's Angels and Fantasy Island.  I had no idea who they were at first, other than two nice women that liked margaritas. After I looked at them for a bit I did remember one as Becky Pyle from Goober and the Trucker's Paradise.

I didn't actually wait on Donny Osmond or Mickey Rooney, but they each did visit the restaurant.  In each case their appetizer was ready (both had nachos with ground beef) and I delivered the little skillet to their table.  Both sat at Table 29, a nice spot off in the corner.

The best part of being a waiter was learning how to multi-task, be responsive to others, and how to beat my brains out for a few bucks and then drive 50 miles in the air of satisfaction from a job well done.

If I got lucky, I'd wait on a table that was going to throw out their perfectly good food.  I'd wrap untouched food heading for the trash in a napkin, shove it in my pocket and eat for free on the ride home.

It was the best prep for being a scientist in 2015. Hustle, making it happen, and waste not, want not.

I always said that everyone should be a food server for at least a few years.  It was hard work, and I still have nightmares from that time.  Most former wait staff say the same thing.

Most importantly, it was a time when I had to make something happen and did it.  It was a long drive for a few bucks to keep the young emerging science enterprise afloat.  I'm glad I did it, because it taught me a lot about how to anticipate need, to do a good job, and focus outside myself in the service of others.
at March 14, 2015