Don't take a number, don't write a nasty-gram, pick up a phone.

Over the last year something happened that I didn't really expect.  Somehow the professional me, and the personal me, became the same dude, 24/7.   I suppose that is to be expected when you are someone that is excited about public interaction as part of your job.

Part of the reason is that I don't think anyone actually reads this or follows anything I do on Twitter, Facebook, etc.  I participate in a conversation, have fun interacting with nice people, and not-so-nice people.  It is just a pleasure to have an efficient electronic medium to communicate with others, oftentimes sharing a joke or explanation of science. 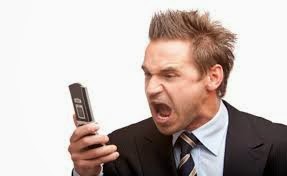 Don't waste your time penning lengthy nastygrams to my superiors--
Reach out the inferior!  Give me a call, we can work it out the easy way!


However, it becomes part of a publicly visible record, that now can be sifted to find gems of discontent, the times when I have crossed a line, said something unbecoming or wrong.  Which I do!  I like a edgy joke and an pithy comment.  I unleash a bit at times, especially when defensive.  I know that.  It is not always right, not always good.

Now that private-idiot Kevin Folta and science-guy, professor-administrator have become one, it is freakishly necessary to watch every step, every word.  Not only does US-RTK want my emails back to 2012, there are others sifting through the past, looking for something to take out of context or misinterpret.

When they find it, they put it up on the web where it moves through the anti-GM meme space.

Yesterday I posted the "Dude, I'm not really a welder" joke in a private conversation in Facebook and had to erase it, because it was going to get upset about it.

Or, they send it to the higher-ups at my institution and complain.  That's fine.  If I really cross a line, go there.

But first, pick up a phone and give me a call.  Let's talk about the problem.  In most cases if I've said something that bothers you, I can explain what it really means and maybe you'll feel better.

If I'm wrong, and I am all the time, I'm glad to apologize, and do what I can to make things right.

Angry emails, cranky blogs, and threats of lawsuits are not a great use of your time, at least at first.  Try the easy remedy.

Even the folks that disagree with me and my views on science, teaching, etc know that I'm reasonable to approach and always glad to take responsibility for something I did wrong.

Don't write to the Governor of Florida, the President of my university or anyone else in the chain of command, at least not first.  Let's work it out together, you and me.  Especially if I did something you find inappropriate, or off base... let me know.  I'll fix it.

That's a promise.  This whole venture is about going forward, sharing science and growing together.  Let's do that.  I'll do my best to do it the right way.