I get rather irritated when I listen to Vandana Shiva, mostly because her ideas are rooted in a place of environmentalism, something we both agree upon.  The problem is that she is touted as an expert in science and transgenic (GMO) organisms, and she is absolutely clueless.  Couple this to an anti-corporate agenda, and this seemingly kind person with concerns for the planet and people is a fountain of bad information.

She puts her anti-corporate agenda ahead of the needs of those that desperately need technology, and Florida farms are a great example.

She describes herself as a physicist, carrying an undergraduate degree in that discipline.  I know dozens of people with undergrad degrees in psychology. That does not make them psychologists.

Then she comes to a state in an agricultural crisis, and then trashes the leading solution. 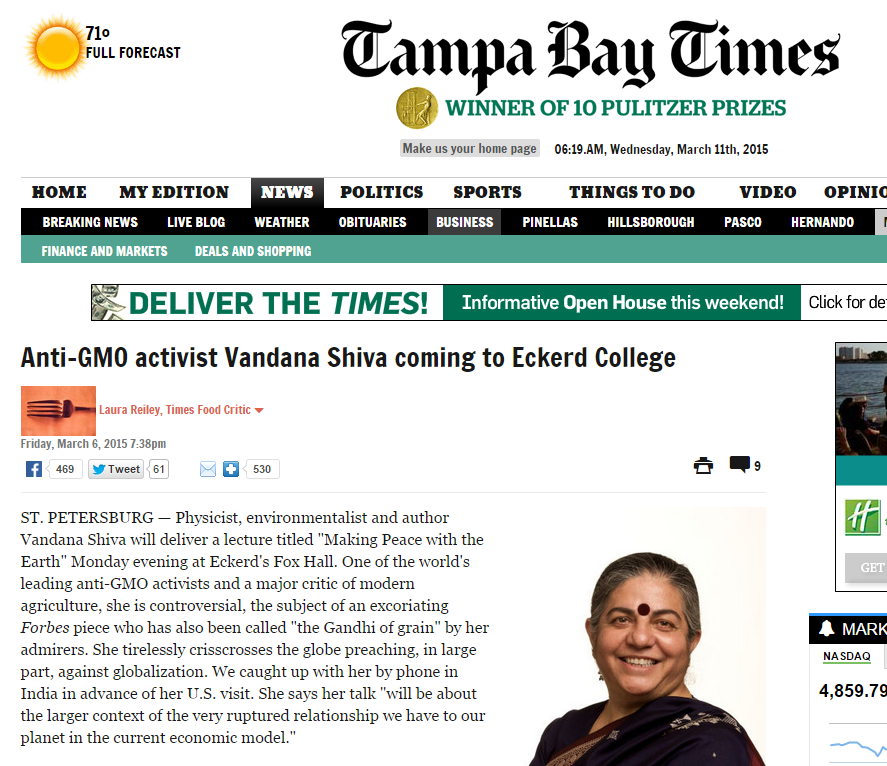 The first word is "physicist", as they try to build her credibility as a scientist. She is an activist wtih a narrow and clear agenda.

She spoke the other night at Eckerd College, a liberal arts school down in St. Petersburg, Florida.  She's on a many-college tour, spreading her message that modern biotech science does not work, causes human disease, keeps people hungry and is only for the profits of "five chemical companies".

Just a half-hour drive east of her podium there are fields of dying trees.  The citrus greening disease, or Huanglongbing, is devastating Florida farms.  The disease is a bacterial infection of the vascular tissues, spread by a small, uncontrollable flying insect.  After a decade of intense study, there are no cures.  A $10 billion dollar industry supporting tens of thousands of jobs fights back on the edge of collapse.

Currently our best scientists are attempting dozens of approaches to save the trees and the industry.  One especially promising approach is the use of transgenic, or GMO, trees.

There are probably fifty different genes that have been engineered into citrus trees, most of them don't work or show little promise.  However, a few show that they can help the tree live through the disease for years after control trees have stopped producing and died.

Some GMO trees contain a gene from spinach.  Others use plant or bacterial genes to either stimulate the tree to grow, or prime plant defenses to fight the bacterium.  Right now these results look exciting, and transgenic technology will be part of the long-term solution.

A bulldozer moves dead trees from a grove to a place where they'll be burned. Shiva's anti-technology message at Eckerd College just created a new class of the misinformed that will fight science's best tools in solving the crisis.

Driving through citrus country evokes a strong visceral response in me.  The acres of trees struggling to produce fruit, the resilient men and women of the industry that seems to be crashing, the State that depends on agriculture buckling to a bacterium.

And an activist stands in a college, revered as a hero, damning the technology that could save the industry just a short hop down the interstate.  She tells the students that GMO technology does not work, that it is only for profits of large corporations, and that it is poison to those that eat it.

Probably none.  These growers will just be angry that a college in their state would not have the fundamental foresight to avoid bringing in pop-culture eco-celebrities that bring a message that harms the farmers only a stone's throw away.

I wonder if Eckerd College knows that Vandana Shiva endorsed the murder of scientists and journalists that support biotechnology solutions?  This is from her website, 7/25/14.  It was taken down days later when she realized it was affecting her brand.

Here a sworn enemy of biotechnology comes to a college under the guise of a physicist, providing an errant message that harms our agriculture.

No Dr. (in philosophy, not physics) Shiva, this is not Monsanto. This is not food subsidies and corrupt politicians.  It is not fake data and crooked scientists.  These are your claims, but they are not true.

This is science, and it is my science, our science, directed at solving a major problem that affects our state's families, our farms, and our environment.

Thank you for your efforts to polarize Eckerd students against a sound technology that could have profound solutions in our state and nation.

Thank you more for teaching students to condemn the family farms down I-4 to endure further hardship.