This week controversy ignited when Patrick Moore, a prominent advocate for Golden Rice, was interviewed on the French TV channel Canal+.  He correctly claimed that glyphosate was safe enough to drink and not likely causing alleged cancer outbreaks in Argentina.  When the host offered him a glass of Roundup herbicide he did not drink it and walked off the set. 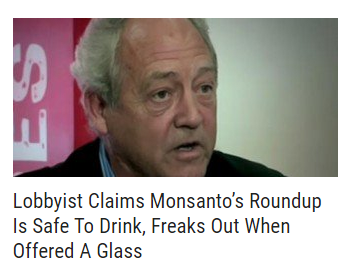 Of course, twitter and other opinion outlets of the world's pseudoexperts exploded with the fact that Moore was forced to eat his words rather than drink weed killer.

And then the Big M felt compelled to remind everyone that weed killer is not a beverage and that Moore is not representing the company.

Once upon a time I did the demo, not hammering a glass of the stuff, but mixing a tablespoon of the working solution into diet Mountain Dew.  No big deal.

Of course when you do a stunt like this everyone goes completely unhinged, screaming that a scientist endorses drinking weed killer. As usual, it is not about thinking-- it is about harming a scientist's credibility. My demo is not about drinking weed killer-- it is about demonstrating empirically-derived biological thresholds, physiological fates of well-characterized chemicals, and understanding a herbicide's mechanisms of action.

But that's nuance and science, so don't expect them to understand that.

So for the record, don't drink weed killer.  There is absolutely no evidence that glyphosate is going to kill you or even make you sick in working concentrations.  However, the formulation used on plants contains surfactants, detergent-like compounds that help the chemical penetrate a leaf.

Anyone who has ever consumed soap (long story) knows that it gives you a royal case of crazy colon, and that would likely be the effect of drinking a full glass of the commercial herbicide preparation.

Moore might have been planning a long flight or a marathon run, places where a case of the urgent flaming schmootzies would be most unwelcome.

My official words- don't drink weed killers or any ag chemicals. Instead, take the time to learn how to use them safely, and always do so within the labeling guidance.