A Petty Stance Against Student Progress

Last fall a student walked into my office. She wanted to survey public opinion about genetic crop improvement.  What are the triggers that excite or scare the public about how crops are changed by breeding, mutagenesis or other genetic techniques?

I thought it was rather brilliant and solicited the assistance of Dr. Thomas Colquhoun, a friend that has mastered the use of Ideamap-based survey algorithms to gauge sentiment on a given topic.  This is the approach used by many agencies, from food manufacturers to governments, to learn about how the public really feels about a topic.

We structured the study and hired a firm to obtain survey information from  over 450 random people across all demographic groups.

The data are astounding. 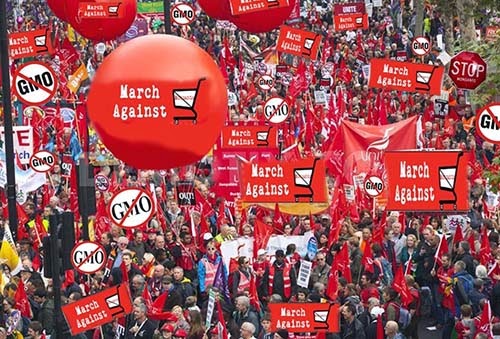 Lots of time to carry a sign, but can't muster a few minutes to help an aspiring young woman scientist.

I thought we could add an interesting highly biased layer by applying the same survey instrument to traditionally "pro-GMO" audiences and those not as comfortable with ag biotechnology.

We have used social media to do the recruiting. It has been easy to recruit "pro" participation.

What's the deal?  When I put any scientific anything online there are swarms of the anti-biotech that are happy to hammer on me. There is always someone wanting their two cents to shape a conversation.

Where are they now?  Why won't they help a student's efforts?  The survey is anonymous.

I posted on Facebook pages of anti-GMO organizations like GMO Inside, Occupy Monsanto, and Moms Across America.  I've included their handles in Twitter feeds and reached out personally to individuals like Nomi from Babes Against Biotech.

I even wrote to Gary Ruskin, the guy that wants my emails through the public records request.  He refused to help too, saying,"You're the one with the contacts in the big companies, why don't you get them to help you."

No kidding.  The guy accusing me of too much corporate integration denies my request on behalf of a student for anti-corporate participation, and tells me to go to the companies!

I've been a little blue about this because I really want those data. I think they could help us communicate better to an activist audience.

I'm also sad for Victoria, the student.  She's invested heavily in this, it will be her senior thesis, and I wanted it to be complete.

However, in a way this has been the best education for the student. She's really bright and will go a long way.  She sees the petty nature of the anti-GM movement first hand-- how they don't want to have a place in scholarship-- they want to obstruct science.  We've asked kindly for their input, and they have declined to participate.

I thought they were bigger than this.

Once we finish the study and the manuscript is published, we'll provide a list of places solicited.  I'm glad to also make it part of the report.

At least we did the right thing and burned a lot of calories to get their feedback.  They can't say they were not asked.