Sony, KJU, and a Coward's Way Out

Next week another movie I don't want to see was going to premier.  The Interview was a comedy about journalists interviewing Kim Jong Un, the leader of North Korea... and then they were given the job to assassinate him.  The huge advertising campaign suggests that the film's script and humor are rather simple and targeted to eighteen year old dudes.

As we all know by now, alleged North Korean hackers cyber-attacked Sony and made terrorist threats to anyone showing or seeing the movie. 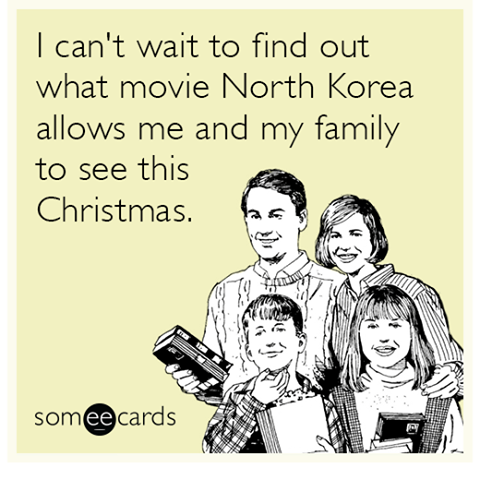 Yep, and here's how Sony and Kim Jong Un played these cards wrong

Sony, or any company, never should capitulate to a terrorist threat.  They should have made a strong statement about the value of art, the value of motion pictures as political speech, and what we can learn from communicating through satire.  They should have said, "In response to North Korea's threats we will show the film for free, everyone may download it, use it as you wish-- we support freedom of expression and political dissent."

KJU shows poor discretion in earning some easy political capital.  The first bad move was hitching his trailer to Dennis Rodman.  There's an ambassador of all things delinquent.  KJU could have made this into political gold.  Instead of inspiring a hacker attack, what if he asked to attend a screening in downtown Hollywood, attending with Seth Rogen and James Franco, the film's two main stars?  He could have had a good time, bought the big tub of popcorn and Snowcaps, joked about how it costs a year's pay in North Korea, and had some fun at his own expense. A softer KJU would be tougher to criticize and criticism would be less effective.

Here a major corporation and a world leader could have made different decisions to change the political tenor of this dust-up, caused by a lame movie that would be forgotten by Ground Hog Day. Instead we have escalated poor relations to uber crappy and KJU found a new cellar in his public perception. Two lessons.  1. Don't be a dick.  2. Never give in to terrorism

If it was a movie that made fun of President Obama or George W. Bush Sony would have never pulled it.  If it was an American Flag on the ground at the Metropolitan Museum of Art or a picture of Jesus painted with a dog dookie they would have defended the artist and the need for free expression.

Here they fold like a house of cards.  I say it all the time, never make a decision based on fear.