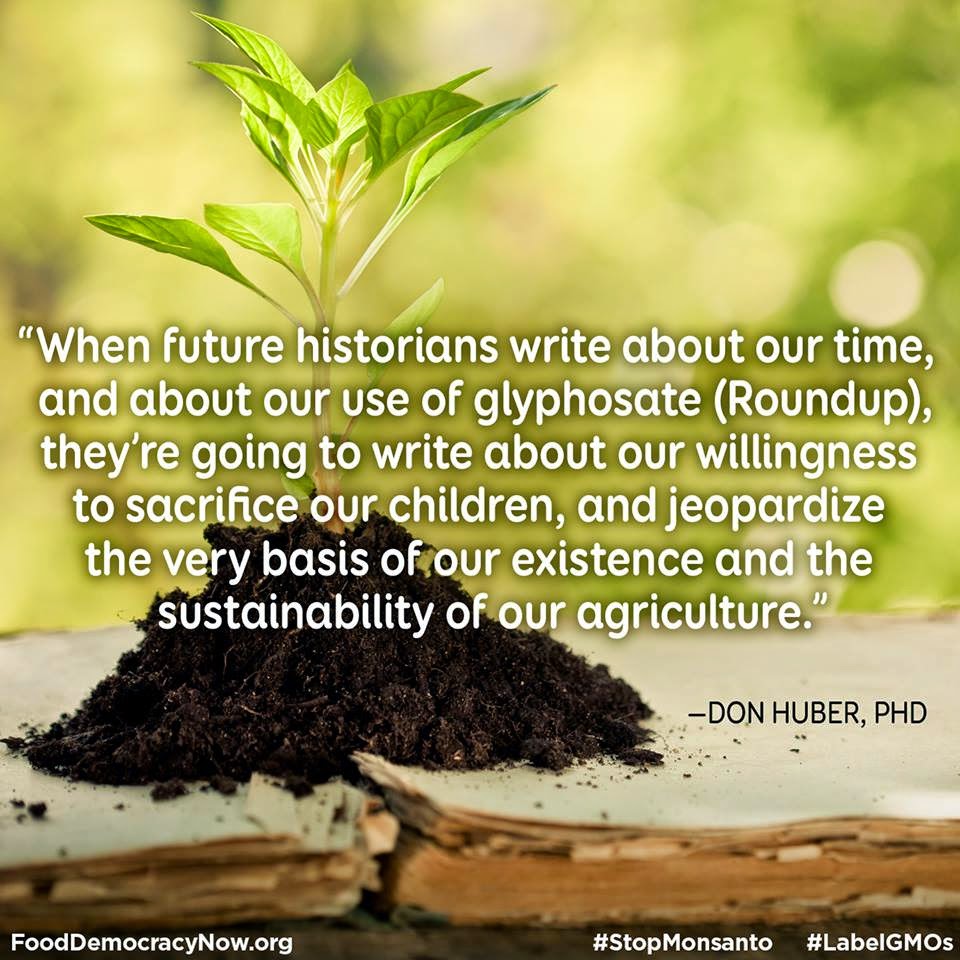 He claims now for almost a decade to have an organism in his hands that contributes to a suite of human disease, illness and death.

He will not release it to the scientific community.

How many must die before he will stop sacrificing our children and our health?   Dr Huber, when will you release information on the deadly pathogen?  What are you waiting for?

One year ago on November 12, 2013, Dr. Don Huber, Emeritus Professor at Purdue University stood in front of an audience here in Gainesville, FL and told them about his research.  He claimed to have isolated an organism, a new "entity" that exudes from GMO soybeans.  It infects cows and causes abortions and causes many diseases in humans.

The audience gasped with every picture of dead calves. They were in shock about his findings.  Dr. Huber had unveiled proof that the GMO industry and Monsanto were killing us all.

The whole story is here.  After his talk, where I sat silently. Marty Mesh, the moderator, pointed me out in the crowd and said, "I know you disagree with everything he said, but we only have time for a question or two."

I didn't have a question, but instead an offer.  Huber claims to have cultured the organism to purity. He says it obeys Koch's postulates. Still, its identity is unknown.

I simply said, "Dr. Huber, I would be glad to help you by sequencing the DNA of your culture.  I could tell you exactly what the organism is by the New Year (it was Nov 12)".

(all of this was recorded, without his knowledge)

I continued, "You get all the credit, we solve this problem, and we end GMO agriculture-- All data will be open access-- public data.  Can I count on you to share the culture? "

He then spent 15 minutes telling us why the culture could not be DNA sequenced, and that the organism has no DNA.

This is quite a departure from his position on Genetic Roulette where he claims to have isolated DNA from the organism and it is being sequenced. 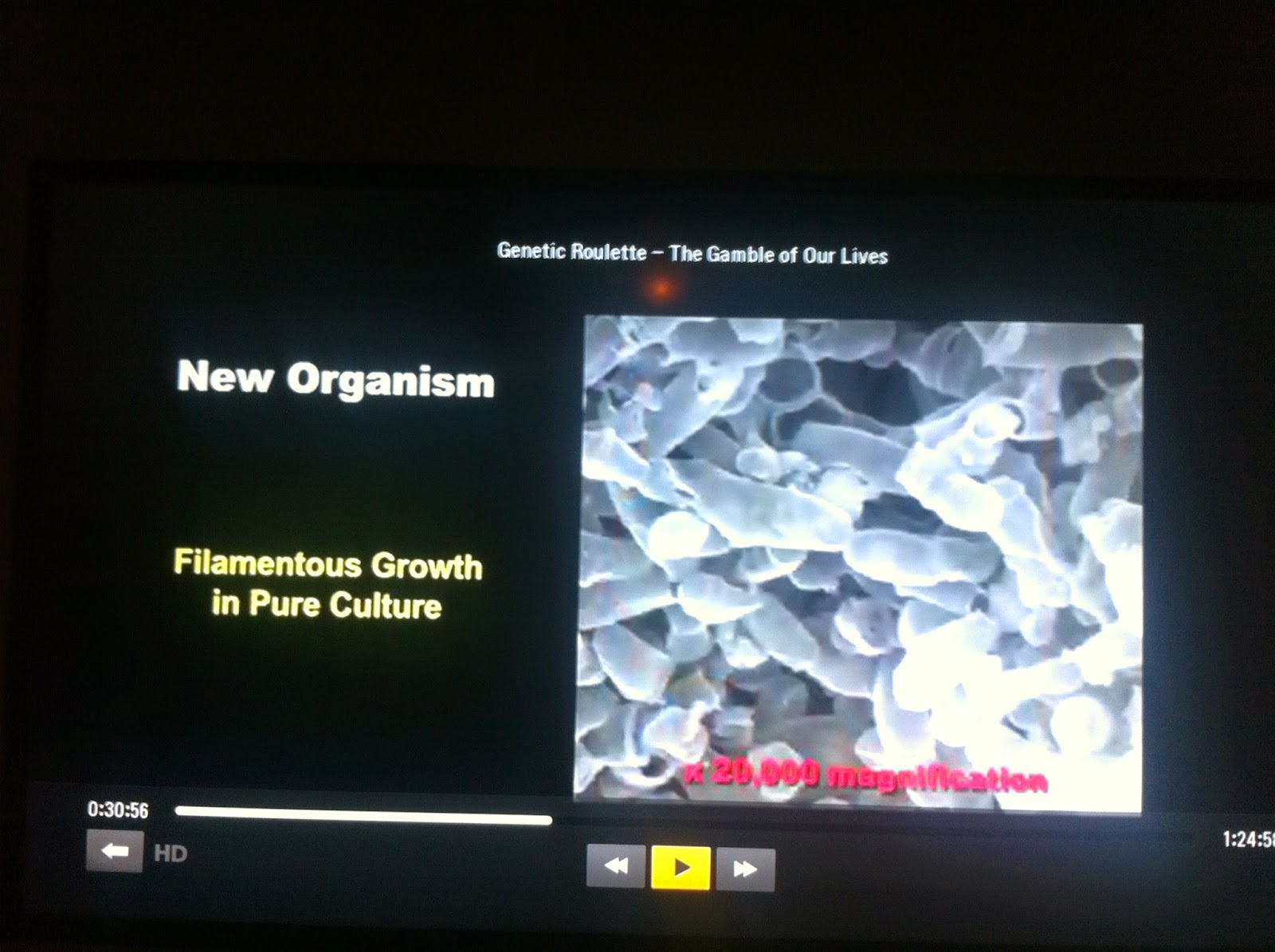 That's a screenshot from Genetic Roulette.  New Organism.
When I ask to help sequence it, he claims no DNA!!!


My kind offer was turned away.  No DNA.  He then moved the goalpost to a "prion" or "biomatrix" in subsequent talks, both which could still be sequenced using proteomic and protein-sequencing methods.

His facade is crumbling.


Huber Tries to Get Me Fired

A few days later he objects to my request and sends a scathing letter full of lies to my boss, the Senior Vice President at the university I work at.  You can read Huber's allegations against me here.
He made claims that were not true, that my recordings showed where not true, and were 100% legally actionable!

I chose not to go after him for libel and trying to get me fired with lies. I'm bigger than he is. It is better to let him twist in the wind of his own lies. If I sue him, I'm a bully.  If time goes by and we just remind the world that he is letting people, plants and animals die for his own gratification, then that's even better.

Such a great reputation too.  Everyone wonders what happened to him.  Many of my colleagues had him as a teacher and now wonder why he's just gone goofy.  Some have said, "He always was nuts".


What Does the CDC Say?

The Centers for Disease Control would certainly be aware of a novel infectious agent that was killing humans, cattle and plants.  I submitted a question about it to the CDC website.  I only got a generic auto reply.

I then submitted a paper letter via certified mail.  I got this email response:

Well the CDC has no record of Huber's deadly agent either.
Somehow he knows more than the folks that know everything about infectious diseases.

So Huber is going around talking about this deadly infectious agent that is killing people, livestock and plants, and it is a threat to food security-- BUT he has kept it from the CDC?   He claims, on recording, to have exported it to China and other countries.

When does this guy stop being an anti-GMO hero and start being held accountable as a terrorist, or even more, someone that is letting people and animals die, and endangering our food supply, because he has some ego issue?   He obviously does not want us to know what his organism is!

Did he create it?   Is he going to hold the world hostage with it?  When will others start to get upset?

People scream for justice against Monsanto for no confirmed deaths.  Huber claims an organism that is killing people and animals daily, and jeopardizes our food supply.... for the last ten years!   When can we decide that he needs to seek additional scientific assistance to end this problem?

Or maybe, when will his supporters and the anti-GMO community decide to hold him accountable for his charade?

I'm not holding my breath.  As long as he says something they find palatable, they won't ask for evidence. Sad that a credentialed academic went this direction.

My hope is that he'll come clean.  It never is too late to grow, and his legacy as a decent scientist has been overstepped by him being a footnote in a joke book, claiming harm from a fictional being, and trying to punish the scientists that only ask for him to show evidence.  Shame.