A lot of folks don't know it, but I loves me a good debate.  In college I was the president of our Debate and Individual Events Team at Northern Illinois University, and our tiny rag-tag team of rhetorical hammers finished 7th in the nation against the huge perennial powerhouses from other universities.  That was a good score.

It was there that I learned a lot about argument and a lot about how to frame a persuasive message. My coaches were (and still are) the best in the business. Vielen danke Santa, Shrek and Solomon!

Tomorrow is the big debate on Intelligence Squared.  Chuck Benbrook and Margaret Mellon are squaring off against Alison Van Eenennaam and Robb Fraley.  It is anti-GMO vs transgenic science in an NPR-mediated battle royale!

Today I provided valuable debate insight and information Alison and Robb,  I'm so glad that these two where chosen against Chuck and Margaret.  It almost seems a little unfair. Two likable and charismatic scientists against a couple of scientifically antiquated ideologs?

Benbrook and Mellon's arguments are classic arguments from ignorance, and concepts forged in the 1990's to manufacture risk around these crops.  Even her review of RNAi this week was a scientific disaster even a first-year grad student would laugh at. 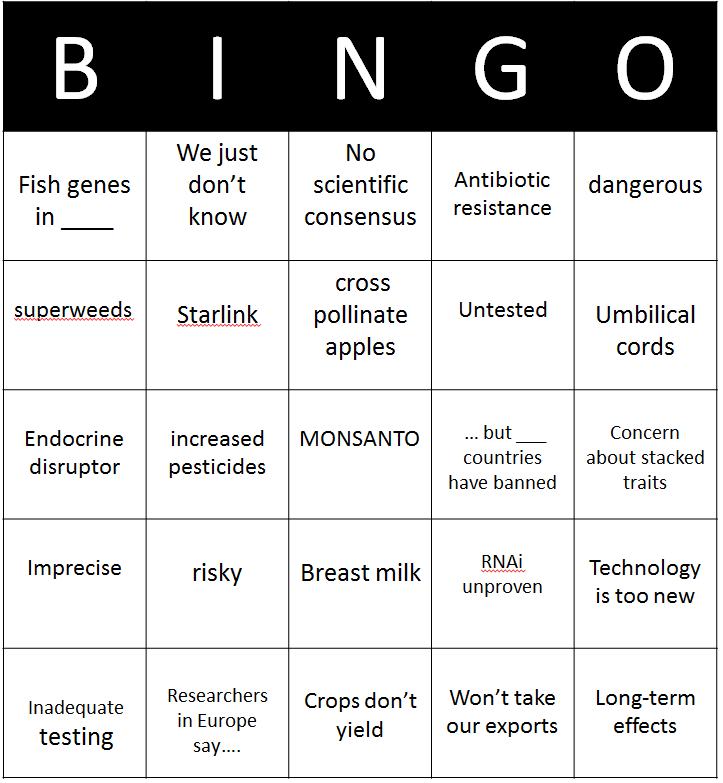 The Benbrook/Mellon arguments are boring and predictable. Use this card to play along at home while they lay down their wacky arguments.  Then open your windows. The enlightened world should extol a unified "BINGO"  about 22 minutes into the discussion.


I can say this because I like Chuck Benbrook as a person.  He's a sharp guy, no doubt.  I spent two days at a discussion next to him and I almost think he does not buy into the BS of the anti-GM hard cores. I think he sees the Man Behind the Curtain, but it pays the bills.

In October I had a chance to hear him testify before the House or Representatives in Pennsylvania.  He actually used "bt in umbilical cords" and US crops being "blocked from export markets" as key points for his position.  Oy vey.  I do give him high marks for his generally realistic stance on glyphosate, as he hasn't fallen into the "it causes every human disease" nonsense.

Margaret used to work for Union of Concerned Scientists, and her recent post showed that she's the clueless shell she's always been in this arena. She has no idea what RNAi is, what the new products are, or how they work in practice.  Her arguments are from ignorance and it is clear that she does not understand the science she criticizes.

The sad part is that this debate really boils down to an exercise on one thing:   Can science win over fear and the unknown?

My prediction is simple. Benbrook and Mellon will speak of "imprecise, unproven science" that could cause "allergies and other issues".   Benbrook has a YouTube video with Robyn O'Brien where he connects GMO foods to autism, ADHD and arthritis  where he scares viewers of all of the "unknowns".

This is what Benbrook and Mellon have.  Fear of the Unknown.  There is no evidence, none, that these technologies are dangerous.  It is fear of the unknown. This is their argument.

Hopefully Alison and Robb will come from what the technology has done over 18 years and what it could do if it was not arrested by political barriers.

So have fun with the BINGO card, and have fun charting that Benbrook and Mellon rely heavily on the argument from ignorance..... "We just don't know..."

Blow them a kiss for me.