Thank God It's On the Internet FOREVER.

I was really excited to watch the Intelligence Squared debate. I've been looking forward to it for seemingly ages.

Bottom line-- it was as predicted.  Fear, questions, and magical thinking against science, reason and evidence.  And science won.  Not only did science win, the fear-based empty fact-free claims from the other side are permanently stored online for everyone to enjoy forever.

I'm not going into too much post-event analysis, but I will take the time to point out some of the major things we all need to take note of.

Mellon has no clue.  Here's someone that is so out of her league.  Her antiquated talking points are no match for reality.  She did a nice slam on conventional breeders, people that are working very hard to improve crops using cross breeding-- and she seems to believe they are not doing a very good job.

She also seems to think that Europe is this wonderful place that has ag all figured out.  Of course, they import massive amounts of food from the USA, Brazil and Argentina because they are not self sustaining!  Here's a nice article by Steve Savage on those not-European-food eaters.

And she keeps saying how the technology has not lived up to its promise.  No kidding. If people like her were not standing in the way of every innovation, blocking every life-saving potential breakthrough, and tarnishing the reputation of every scientific technique-- maybe the technology would exceed expectations! 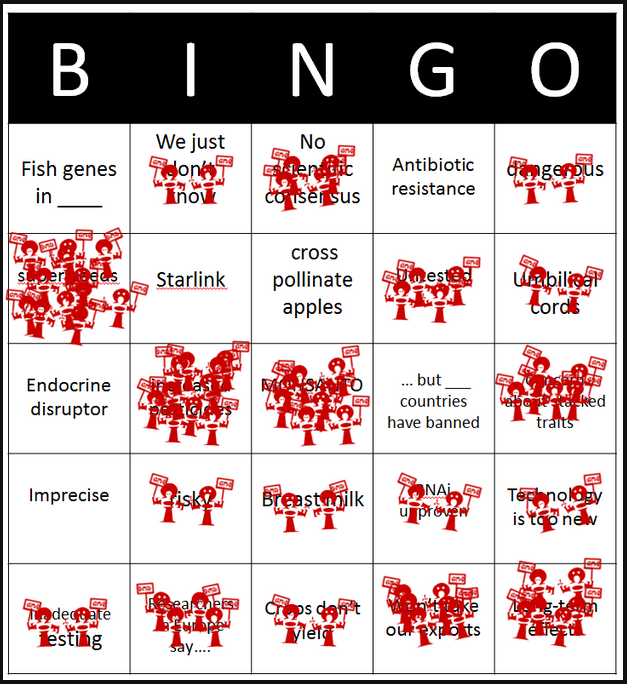 The card got a good beating!  I think I did hear Benbrook say "antibiotic resistance" and we came close on Starlink!

Chuck Benbrook really started to unwind in his final statement.  Defeated and called on his own errors, he spent the last 2 minute conclusion time on glyphosate. Not GM crops, not technology, but the herbicide.  He made the claim that "its in our blood and in our hair", and I think we need to demand some evidence for that.  Earlier we exchanged a pointy tweet about umbilical cords, or else he might have rolled that out too.

As usual, he combines pesticides as herbcides and insecticides. It is the only way to massage the statistics to get the conclusion he wants.  Clearly these products cut insecticides, and yes, herbicide use is up, but glyphosate has much lower impact on health and environment. Shame.

Most importantly the results show what we know.  Most people that are undecided will gravitate toward science when they are offered facts over fear.

I also hope they do this again, only next time it should be Alison and Robb against Jeffrey Smith and Stephanie Seneff.

That would be worth watching!