Thank Goodness? How to Smear a Scientist

Here's a story that starts with a simple comment on a website.  It ends with insults, anger, and delusional defiance.

A graduate student funded by NSF (the same folks that have funded my work over the years) libeled me in a harsh way.  Complete lies and nonsense.  I got nowhere with her kindly through private correspondence, and therefore just want to make the conversation public. I didn't want it to come to this.

There is a level of professionalism that is lost and an unacceptable breech of ethics for an academic.  She overstepped many lines, refuses to correct her falsehoods, and I feel it necessary to tell my story to protect myself from libelous accusations that are simply not true.  I never wanted her to experience any harm or negative effects from her indiscretions.  She refuses to correct her libelous statements, she stands by them, so I'm happy to post my interactions with Valerie Goodness here for all to enjoy.

I also contacted her Dean.  His response was limp at best, turning me over the the Office of Equity, Diversification and Inclusion, which found they have no jurisdiction of her actions.  Duh.  I feel that the university does have jurisdiction over the quality of scholars they produce, and if this is acceptable behavior for someone in the their program, it leaves a lot to be desired.

A Quick Note on Mother Jones

About a month ago COSMOS aired the story of a public scientist that blew the whistle on a corporate influence scam.  Of course, Mother Jones didn't see it that way.  They portrayed it as corporate influence buying off scientists, playing into the far-out-liberal and far-out-conservative concept that academic scientists are just paid stooges for whatever corporations want to say.

I was the first to post, and posted a thoughtful retort that simply stated that it was about an independent academic scientist bravely standing up to corporate influence.

Then the poopstorm rained upon me in the comments section. I"m only posting a few gems in this blog.  The whole thing can be viewed here. Within the hour a vicious thread assembled, telling me about the bought-off scientists and fake results.  Of course, being a non-bought-off scientist that only publishes highly reproducible results (like the rest of the scientists I know) I had to respond, and did so throughout the thread. 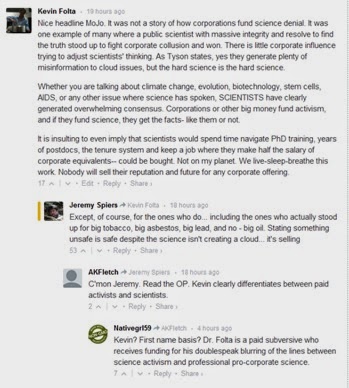 Nativegrl59 claims I'm a "paid subversive who receives his funding for his doublespeak... and pro-corporate science"


One commentor was particularly awful.  It was not just her bankrupt opinions.  Those I can deal with.  It was what she was saying about me.  Awful, mean, personal stuff. I didn't know her.  It was just a chance to smear me by making up false associations.

She went by the handle Nativegrl59.  Even in the sample above you can see that she's really blown a gasket.  She then goes on... 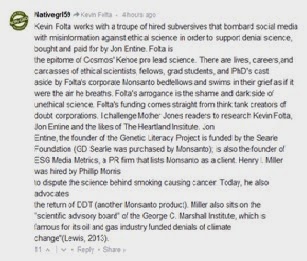 She's really going after me with no evidence.  Pretty mean.

I do take this rather personally because she claims that I have harmed the careers of "ethical scientists, fellows, and grad students".  That breaks my heart.  I have been recognized with highly competitive awards for my undergraduate teaching and my outreach.  I also received a wonderful award for postdoctoral mentoring and serve on a university-wide committee to enrich their experiences.

Moreover, all of my former students contact me, send me baby pictures, and just about all of them found great careers.  A few of them give me big cred for helping them get to where they are today.

She claims I have "Monsanto bedfellows" when I don't have any associations with them other than knowing people that work there.  And they moved there after I knew them from academic science.

She claims my funding comes from places-- well, that just are not true.  My record is all public.  I have no money from Jon Entine or Searle or Monsanto, or whoever she says.  It is her way of trying to hurt my reputation as an independent academic scientist, all which is public record. 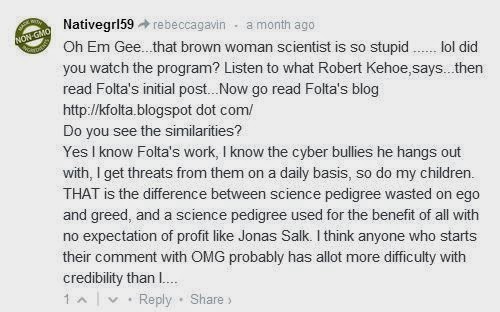 "I know Folta's work, I know the cyber bullies he hangs out with, I get threats from them on a daily basis, so do my children"

She's has crossed a line.  At the time I had no idea who she was, I certainly never threatened her or her children.   This is a horrible thing to put on the internet, no matter how much you disagree with someone- why try to harm him/her personally?

Here in Gainesville I teach special science classes for children at the Alachua Public Schools.  I teach there, voluntarily, a few times a year (used to be more when I didn't have administrative work).  I judge science fairs, run programs for kids and coordinate grad student efforts in teaching at the schools.  At night I teach karate classes- don't get paid to do it- but do it because it helps kids and the organization.

In today's world background checks are commonplace, and as a potential teacher you are guilty until proven innocent.  Having this information on the internet is truly harmful, and I can lose opportunities to help others. 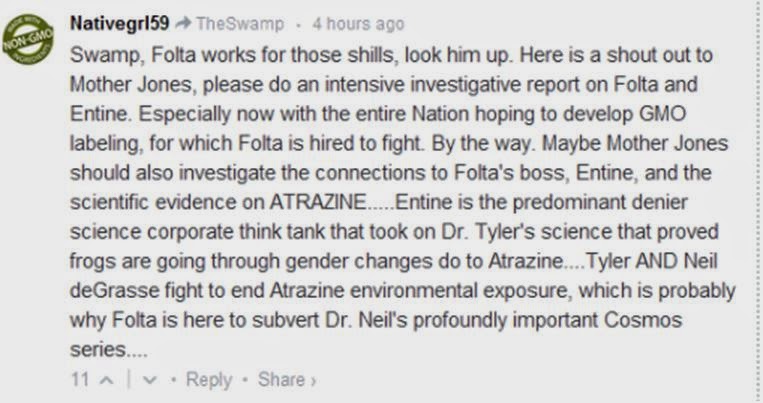 Again, more false smear.  No words can describe how this makes me feel- a complete blend of anger, disappointment and empathy for this deluded soul.  I'm disappointed that an NSF-sponsored fellow would do this.

My website states no such thing, and I never got anything from Jon Entine.

The threads went on forever, others came on to discuss and defend my position.  Awful things were said about me and I do take it way too personally.  I didn't even consider to figure out who Nativegrl59 was.  Didn't care. Clearly someone that had it in for me.  But others did care, and in the middle of the night  I got an email from one internet sleuth that in a google search connected the dots.

She's Valerie Goodness, a graduate student at SUNY- Buffalo.  Public information says that she's an NSF-IGERT fellow, so essentially the same people that fund my outreach activities, also fund her to trash me so I can't do outreach activities.

There's no question about it. I"m not publishing the screenshots that make the connection, but it is clear. Even her facebook page has the same "Non-GMO" icon.

Now that I knew who she was, could I get her to kindly correct the content, especially about daily threats to her children?   I sent her a professional letter by email asking for correction and compliance. 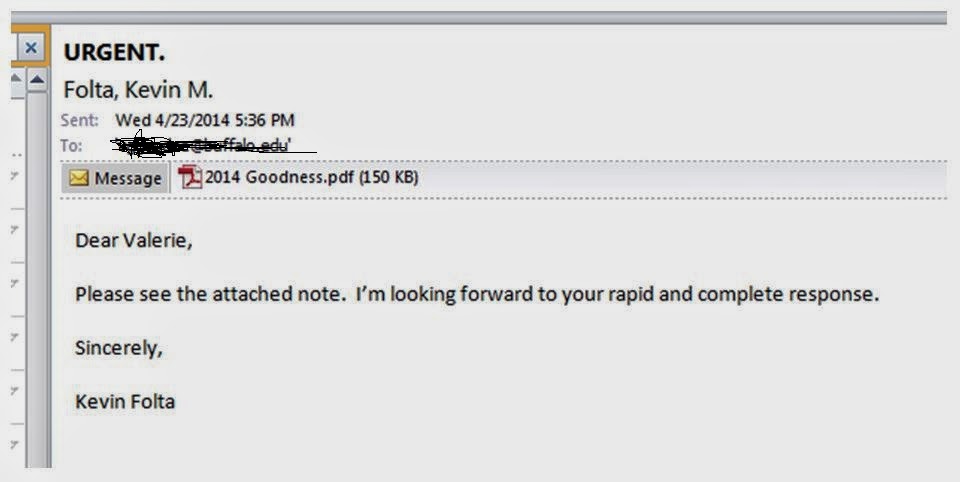 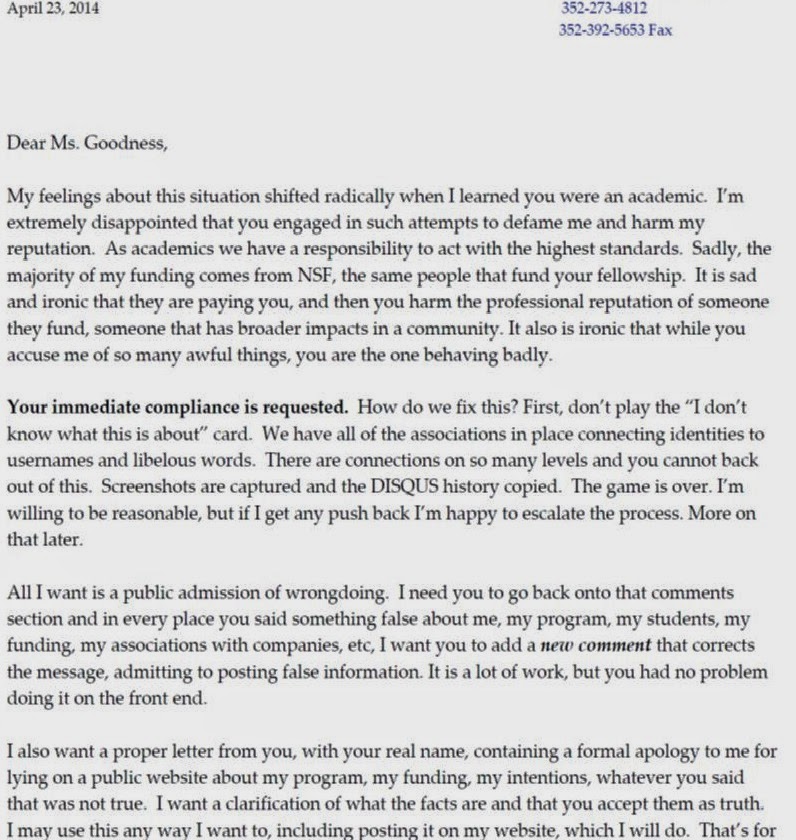 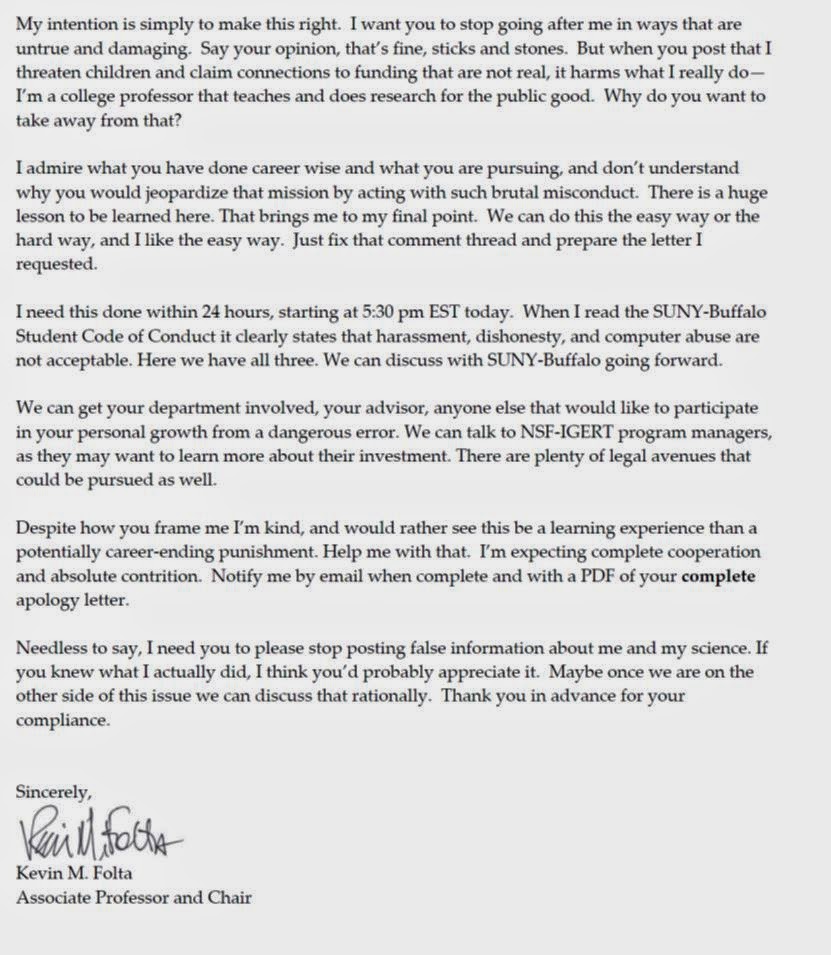 The letter was pretty soft and asked for her cooperation.  The overarching spirit was to simply make it go away, lesson learned, false information corrected.  But she had a different interpretation.  My simple request for an apology was taken as a threat.  This is the email I received from her. 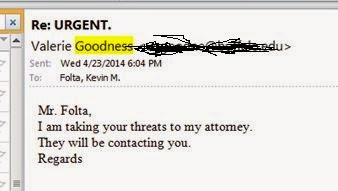 I was kind of hoping for, "I'm really sorry and will fix it"

There was no action, no news for several days.  I prepared another letter, again, soft, kind, and just asking her to remove the horrible falsehoods she put into a public forum with great authority. 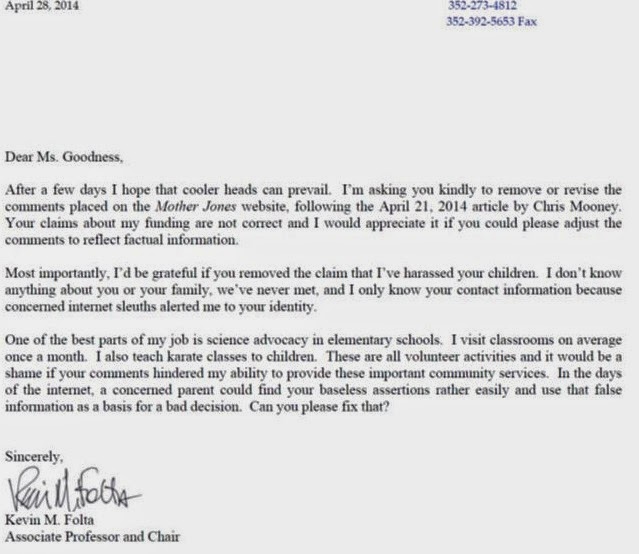 Maybe progress?  She seems to be getting reasonable, and backs away from the "threatening".

It was something like three weeks since she decided to put vicious lies about me into a public forum and she clearly was not going to make any attempts to remedy them.  At this point I'm assuming she's standing by them as factual content.   I try one more time with a simple email...

One more try.  Can I appeal to her sensibilities?  Please?

Apparently not.  Again, the blistering accusations of "threats" which appears to be a front-and-center claim in her arsenal.  Her response:

She's obsessed with being the victim of threats. I've continually said that I have no intention to be difficult and please just fix it.  That's a threat ?

First off, it was simple to figure out who she was and I thank those that took the time to do it.  However, I request that nobody harass or even contact Valerie Goodness.  In a situation where unethical behavior is the central criticism, we must not adopt those behaviors.

I have been advised to go after her legally and have even been put in touch with attorneys that say that this is actionable-- slam dunk.  I just don't see how spending the time and money to go after a grad-school mother makes sense.  I don't want her to have personal hardship, I just want her to fix the website and apologize.  Hell, I'll even take fix the website.

This has had damages. How do you quantify cost to my career and reputation, especially over time?  In a way, it is nothing.  Most know me and what I do, who I am.  But that information could cost me opportunities, both professionally and personally.

The easy solution is for her to fix it.  She won't do that.  I acted 100% in good faith and wished to keep this private.  I wanted her to realize her mistake and fix it.  Unfortunately that false information remains in the public domain from Valerie Goodness' doing, and this is my only realistic recourse. Valerie Goodness clearly stands by her statements that I'm at least associated with people that daily threaten her children and get my funding from big business.  She stands by her statements of my collusion with companies and journalists.  She even claimed that I show proof of this sponsorship on my website- which is false. This is not about affecting Valerie Goodness, it is about correcting her false statements about me.  I want the truth to be out there, as that is how I operate.  She could learn a lot by spending a semester in my lab, and I'd be glad to mentor her in professionalism and ethics.

Note her twisting my request for truth- into being a victim of threats.  Note that she has broadcast horrible falsehoods about a public scientist that works hard in independent scholarly research, community outreach, student/postdoc mentoring, and many other aspects of academic interactions.

Science is not just about data and hypotheses.  It is a pursuit for the Truth. It is about trusting students and postdocs, trusting other scientists to live by tight ethical standards. If someone can say outright false information about a public academic scientist, then that person may not be trustworthy.  I would absolutely question any results, claims, or conclusions in any manuscript, grant proposal or professional interactions coming from someone that could manufacture false information, and then dig in their heels when asked for validation.

This is not allowed in academia.  When someone is willing to fabricate information to meet their needs, or harm others' careers if they stand in the way of ideology-- that's is unacceptable.

I really wish that my simple comment to add to a public discussion did not have to come to this.  However, gentle interaction and discussion failed, and it was a last resort to get the real information into the public domain. As always, I'm happy to answer any questions,   kevinfolta@gmail.com.


Special thank you to everyone who has given me such kind thoughts in light of her comments,