When I was asked to do a point-counterpoint for the Orlando Sentinel I was hesitant. Why give an activist's non-scientific opinions the illusion of equal weight to my facts and science?

In anticipation of the other writer preparing a poorly-researched anti-GM rant, I wrote my counterpoint to address the vacant arguments, and Dalyn Houser's anti-GM piece fell right into it.  Houser is a representative of Florida PIRG (Public Interest Research Group- ironically not doing much research, especially in science for the public interest).  Every single point is an argument from ignorance or a typical trot down non-scientific thinking.  Sadly, there is outright false information that further fuels misunderstanding of this topic. I don't know if she's outright lying or just misinformed, but neither adds good science to the public understanding.

To further illuminate that point, I've copied it here and go through each point, providing the scientific perspective in bold.

Americans deserve to know what they're eating: Front Burner
By Dalyn Houser Guest columnist
12:00 AM EDT, May 9, 2014
HOUSER: The use of genetically engineered crops has greatly increased in frequency over the past several years. Biotechnology giants like Monsanto and DuPont have quickly gained a dominant share of the market by supplying farmers with genetically engineered soybean, corn, cotton and other seeds.

HOUSER: So, what's the problem with this rapid acceleration of genetically modified food?

HOUSER: According to the U.S. Department of Agriculture, better than 90 percent of the top U.S. crops — such as corn, cotton and soybeans — are genetically engineered. That's a major jump since the turn of the decade.

I'm not sure exactly where this statistic comes from, but basically there's more farmland, and yields have also doubled since then. Also, pesticide? She's lumping herbicides, fungicides, insecticides into one group probably.  The fact is that PER ACRE herbicide use is up slightly because the number of kg/acre due to the use of glyphosate. Glyphosate' increase precisely offsets other herbicides (Duke et al., 2012).  Yet glyphosate has a vastly lower toxicity and environmental impact quotient- more compound still means fewer effects and impacts on the environment.  Insecticide use has been cut in half on corn and cotton according to the NAS 2010 assessment (figs 2-7 and 2-3). 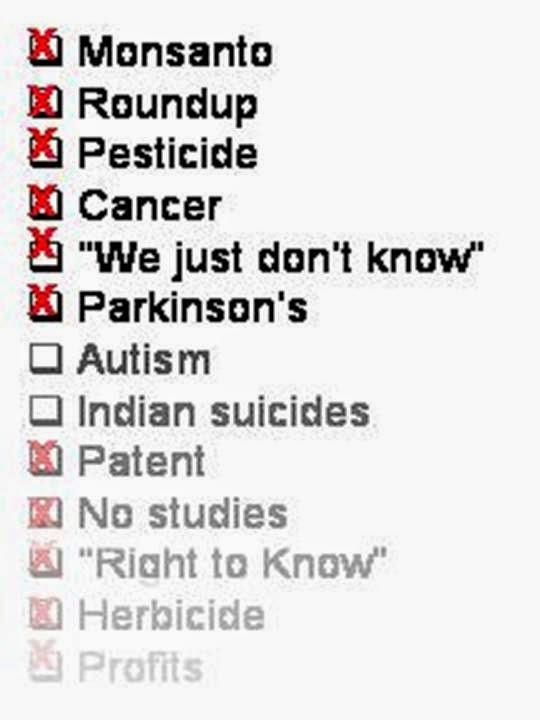 True to expectations, Houser's opinion piece in the Orlando Sentinel checks most of the terms commonly used to misinform the public about safe technology and their food.

HOUSER: This escalation poses a potentially harmful impact on our health and local ecosystems due to the fact that most GM crops already are engineered to produce their own pesticides.

Ms. Houser swings and misses and shows her absolute ignorance on the topic she is trying to discuss.  The protein in GM crops that is toxic to earworms has no effect on non-targets (Wolfenbarger et al., 2008) including humans (Betz et al, 2000). Ecological effects are nothing compared to those of broad-spectrum conventional or organic pesticides.

HOUSER: Genetically modified crops also are resistant to chemicals, which include Roundup. This allows farmers to kill weeds with this chemical, glyphosate, without harming their crops. The ability of the plant to be unaffected by chemicals has resulted in the increased use of glyphosate.

HOUSER: Some studies suggest the increased use of glyphosate, patented by Monsanto in 1970, may be linked to a number of health problems and diseases, including Parkinson's disease, infertility and cancers. However, longitudinal research on the topic is lacking.

Yes, patented by Monsanto in 1970, and patent run out in 2000 or so.  Again, the mention of disorders to bring fear with no evidence.  The work she refers to is unpublished, in vitro, or other cherry-picked articles noting spurious connection.  Research is not lacking.  Read the MSDS, or any of the thousands of papers on the topic.

HOUSER: The main point here is that we are unaware of the impact of these chemicals on our bodies, which are being increasingly added to our body burden (the aggregate volume of toxic chemicals existing in the human body at a given time) as they entrench and blanket our environment.

No, the main point is that she is unaware. Is it again an argument from ignorance. Glyphosate is well understood.  There is no "body burden" as we understand how the compound is metabolized and removed from the body. Upon ingestion of this compound that "does not pose a risk to humans" (Williams et al 2000),  95% is gone in urine and stools within hours, the rest is metabolized by specific cytochromes in the liver (Williams et al, 2012).

HOUSER: The amount of herbicides and pesticides used on farms for agricultural purposes will only increase with the current state of political affairs.

Not sure where she's going.

HOUSER: Most commodity crops are not eaten as-is, but are made into additives like high-fructose corn syrup or hydrogenated oils that go into the wide array of junk foods present on grocery-store shelves across America. Corn, soy, wheat, rice and cotton are some of the most heavily subsidized commodity crops turned into artificial syrups and sweeteners.

No, most commodity crops are eaten as-is.  They are used for animal feed (70%) with a significant amount going to renewable fuel. Probably 10-15% are used in human food.  Wheat and rice are not GMO.

HOUSER: So, not only are we subsidizing junk food, but also the majority of crops are becoming GMOs — of which we are unsure of the biological and ecological consequences.

Again, the argument from ignorance. Junk food is a problem, but that's because of consumer demand, not because of transgenic crops.

HOUSER: Since it is clear that legislative reform is slow in coming regarding Big Agribusiness, Florida PIRG, a statewide advocacy organization, has campaigned to promote corporate accountability by putting pressure on grocery-store chains to label GMOs. Doing so will set the stage for broader enforcement of these policies in the future, through regulation.

Think about this.  Here is a woman that has no idea what she is talking about that is working with a group to go after companies by "putting pressure on grocery store chains to label GMOs".

This means that they are using lies and bad information to force companies to adopt their political policies.  It is more food terrorism.

She states that her goal is to "set the stage for broader enforcement of these policies"...   What policies?  Regulation?  These are among the most tightly regulated organisms on the planet.

HOUSER: It is the consumer's right to know what our food contains.

It is a consumer's obligation to learn, and a guest author's obligation to check facts.  The ingredients are on the side of the box or on the back of the can.  That is what your food contains.  The process it took to get there does not matter. Whether it comes from GM, conventional or organic, sucrose is sucrose, soybean oil is soybean oil.

FALSE.  China has been growing GM crops for over a decade.  80% of Brazil's GM soybeans, and significant corn supplies to go China (see Reuters article 2013).  25% of US GM corn goes to China.  To say that China "doesn't endorse genetic modifications to food products" shows her thin knowledge and/or intent to manipulate the reader.

China rejected some shipments that contained corn from the US, Brazil or Argentina when a line called Agrusure Viptera was detected.  This Syngenta product has genes against corn borer that have not yet been approved in China, and the application for approval has been in consideration since 2010.  They do not reject GM, just this one product that has not yet negotiated China's regulatory process.

Probably true.  Is that a compelling statistic?  I'm guessing that the 275,000 farmers that use GM in the USA probably saved $427 million in fuel costs by using glyphosate instead of tilling to control weeds this month alone!  Remember, farmers use the technology because it saves them money and allows fewer inputs that cost money and end up in the environment. Lost sales? What a lame argument. It is a drop in the bucket compared to what the gains are in the field.

HOUSER: Polls consistently show more than 90 percent of the public supports labeling in the United States, and now American companies are losing business to other nations that have outlawed GMO consumption.

There is no country that has "outlawed GMO consumption".  There are three countries (Peru, Kenya and Saudi Arabia) that I know ban growing them and importing products. Certainly not the EU or Japan, etc. Again, most of the GM shipped and used there is in the form of animal feed. Even places that label GM food (like Europe and China) accept imports no problem.  90% of the public wants labeling only means that the fear mongers like Ms. Houser have inspired their fears rather than educate them.   We know that is true, and the 90% comes from fear due to bad science and opinion pieces like this.

HOUSER: It's just smart business sense for companies to give their customers what they want.

Then label food as non-GMO and those that fear science can go make their decisions.  Don't expect the taxpayer to finance a new bureaucracy because people don't understand science.

HOUSER: I would say let us have some accountability in our food and have proper testing conducted of the food we are consuming, and the damage we are accountable for in the environment.

Wow.  I'd say let's have more personal accountability to actually research a topic before writing an opinion piece about it.  This just perpetuates the nonsense.

Get this straight-- here's someone with limited knowledge of the subject that was compelled to craft a poorly-written and erroneous opinon from fear and ignorance.  It is the perfect set up for my associated article that says there is no debate, not two sides.

I welcome Florida PIRG and Ms. Houser to contact me at any time.  We can talk about the science, talk about the facts, and maybe they can focus on real issues in our state and on our planet.  PIRG claims a mission toward a 'more vibrant democracy'.  That starts with education, especially in science.