July 31, 2017
Last week the New York Times' Stephanie Strom published a report that there were meaningless levels of the herbicide glyphosate identified in ice cream-- Ben and Jerry's Ice Cream. Turns out that the organization that paid for the tests, Organic Consumers Association (OCA), has been trying to "force" (their word) Ben and Jerry's to source organic milk for some time to no avail.

I reported here that such pronouncements are counter to the accepted methods of scientific publication, and that in absence of methods, replication and statistical treatments no sound conclusion could be made.  I hypothesized that the report might be payback for not sourcing organic milk.

To the casual bystander this is rather low, and it is not looking good for the Organic Consumers Association. OCA is a relentless science-free religion exploiting the organic halo and all of its innocent presumptions.  OCA does not support organic production or farmers directly, they simply despise biotechnologies and modern genetics-- along with the companies and ag producers that use them.

US-Right to Know and Gary Ruskin receive the vast majority of their operating funds from OCA, hundreds of thousands of dollars per year.  So while not realizing the irony, Gary comes to the defense of his funding stream with his best offense-- the shill card. 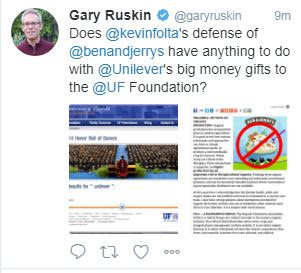 Gary's post on Twitter posits that my defense of Ben and Jerry against an activist hit job must be inspired by money.  Some of us  just do what's right.

First of all, I'll be tickled if this activist attack drives Ben and Jerry's out of business. Awesome.  Their brand has stood for non-scientific policies and misinformation about food.  They should go away.  Glad to see it.  I just don't think that alarmist propaganda and bogus data should be their demise.  But, if you live by the big dumb misinformation sword...

Under Gary's assumptions my university overlords must be piping angry with a public statement like that.  Nah. They don't care. They expect me to speak up against injustice. Plus, funds coming into universities from corporations doesn't usually trickle down to the trenches directly, and certainly not to professors personally.

Let's use this blip of ignorance to examine how corporate funds donated to universities actually fund stuff.  Here goes!

1.  What Gary Thinks.  Well, frankly I'm not sure, but from his words it is clear that he believes money donated to a university somehow supports my salary, my research and my whimsy.

This is the perception, that corporations write a check to the university that ends up in the laps of researchers for discretionary investments.

2.  What Actually Happens.  Corporate gifts are welcomed and cherished, as they significantly allow public universities to take on new capital campaigns that public funding usually does not. These gifts typically rarely directly fund a researcher's work. Instead they are used in larger projects that are desperately needed in today's crumbling universities.

3.  How Do Researchers Pay for Doing Research?  Funding comes from many places, but in most places it comes from federal or state grants.  Right now the funding rates are historically low, between 5-15% of submitted proposals being funded. Most funding solicitations happen only once per year, so many scientists go years without research funding for important projects.

Rumblings from the White House and Congress suggest that even leaner times are ahead.

When we are fortunate enough to find support, the funds go quickly. Personnel, materials services-- all extremely expensive.

Researchers write grant proposals that are occasionally funded, the university gets a cut, then the rest of the funds go quickly in financing research.

In the diagram above, if a researcher receives grant funding between 10-60% go to the university for "indirect costs".  These funds cover the cost of electricity, water, custodial services, heat, cooling, building repairs, office support staff, and other legitimate background costs that are required to perform research.

The remainder goes to the researcher's program. With fringe benefits, postdoctoral researchers cost over $60,000 per year. Graduate students (stipend, tuition and fees) run about $35,000 per year, and we have to commit for at least four years. Few grant awards are that long in duration, so we roll the dice that we'll be able to finance a student if choose to take one on. It is a huge risk. Many of us do it knowing that we may be paying their stipend out of pocket.

Worse, collaborative proposals fare better than single-investigator ones, so funds are split between labs or universities. A $500,000 award (typical for USDA, and only ~$350,000 after indirect costs are covered) can cover a postdoc or grad student for 2-3 years at one location and maybe some hourly technical assistance at the other.  That's all folks.

Most universities do offer some support for students and equipment, so it is not 100% on the researcher, but we have to plan it that way, and then welcome any assistance.

How Much Comes from Evil Corporate Overlords?   Not much. Hardly any, so Gary's assertion that professors are somehow beholden to defend corporations is really sort of silly.  I didn't have the exact figures, but this is the overview for 2016. 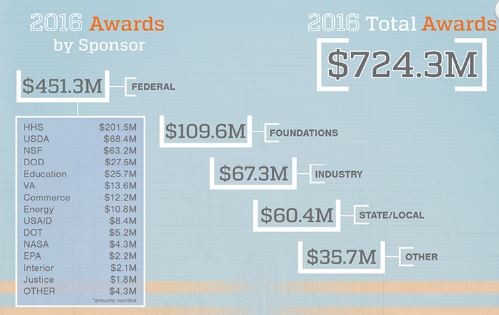 Corporate sponsorship is buried in that "other" piece of the pie.  In previous years it was about 3% of university funding. 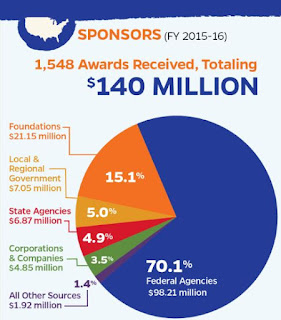 Here is the breakdown from the Ag and Natural Resources part of my university. 3.5% comes from corporations, $4,850,000.  That's probably about almost equal to the cost of fulfilling malicious FOIA requests.

And in that 3.5% corporate chunk there is funding from Tupperware to learn how to make fresh fruit last longer, funding for organic production on how to help Tampa-area farmers extend profitable seasons, funding for improvement of blueberries and lettuce (non-GMO of course), dollars from fertilizer companies to help tailor use of fertilizers around sensitive watersheds-- and plenty of other beautiful work performed by the world's leading experts.

Conclusion.  The shill card is easy to throw around, but doesn't stick when you analyze how university research really is supported.  We represent a great value for the public, putting service ahead of personal gain and striving to help farmers, consumers, the environment, and those in need, in our state and on our planet.

And in the big scope of the things we do, the Ben and Jerry's brand or their parent company Unilever is not even on the remotest list of priorities. We appreciate their support, and they reap their dividends in an educated population and more sustainable food production.