Well, not really.  In fact, they basically told me to pound sand through one of the professors serving as a spokesperson.

I emailed an invitation to discuss the claim that the movie Food Evolution fit the criteria of propaganda, a claim that they made in a signed, public letter that has garnered much attention. Coverage of the letter describes the 45 signatories as "experts" and "prominent scientists, academics, and writers—many from UC Berkeley".

I personally have a problem with referring to science as propaganda, and in today's contentious climate around climate, vaccines, and genetically engineered crops (the GMO story), dropping the word "propaganda" does three things.

1.  It invalidates the content as authentic representation of science.

2.  It impugns the integrity of the scientists that participated.

3.  It harms application of technologies that could be helpful to people and environment.

The film Food Evolution was not made by scientists. It was done by filmmakers that followed events as they were unfolding in Hawaii, Uganda, and New York, with minor visits to March Against Monsanto in Chicago and the Heirloom Expo in Modesto, CA.  They chronicled the story as it unfolded, offering time to all involved in the discussion.

As it stands the film is a factually correct documentation of the stories unfolding in these locations, interspersed with interviews of folks for, and opposed to, crop biotechnology.

The letter says, in no uncertain terms, the film "deserves to be called out for what it is: a piece of propaganda."

The communications vehicle of "propaganda" has some specific criteria, although they are disputed even among scholars.  However, there is agreement that propaganda is a class of persuasion, and is typified by emotional appeals, faulty reasoning, use of fear, and is intended to manipulate the opinion of the targeted audience.

So it is easy to see how the Berkeley 45 find comfort in calling this science propaganda.  The film shows that technology they loathe can help solve problems, and that some of their heroes don't look good opposing it.  To them, that satisfies the faulty reasoning tenet of propaganda.

But prominent scholars should consider critical evaluation of the subject and the ramifications of referring to a story of sound science as propaganda. Just because you don't like it, is it false, misleading or deceptive?

Why this is Damaging

Their criticism letter offers no discussion of factual inaccuracies. Instead, the signatories attack the funding source, revel in what is not covered, and trash the credibility of participants - sometimes due to ancient associations.

The film was funded by IFT, the Institute of Food Technologists. They commissioned the film as part of their 75th Anniversary.  This is a scientific society, made up by many professionals, scholars and other experts in food.

But the Berkeley 45 need a boogeyman in order to harm the credibility of the film. They suggest a tie of funding to the biotech industry with no evidence. They also shun results of AAAS polls and the National Academies of Science, stating that there is no scientific consensus on GE crop safety, citing this dud of a paper that is signed by the usual subjects.  That's some smoking gun.  I guess everything in the movie is false.

They also infer that Dr. Alison Van Eenennaam, a centerpiece in the film, should not be trusted because she "has worked in the past for Monsanto."  Actually she worked for Calgene, which Monsanto bought, so she ended up there briefly until she was hired as faculty in Cooperative Extension at UC-Davis.

The sad part is, that nobody in the Berkeley 45 refute what she says.  They imply that her employer for a short time, two decades ago, makes her unfit to be trusted. Prominent scholars.

They also impeach former GMO crop wrecker Mark Lynas and his credibility because he was hired to help advance the discussion of biotech crops as part of a Gates Foundation grant to Cornell University.  Anyone that met Mark knows he's no Big Ag friend, and simply found the error of his ways by fighting science that can help the causes he cares for. But they disqualify him from the discussion in their letter. Prominent scholars.

I'll go through the whole letter another time. It basically just says the film is junk because of the things it does not cover, and certainly in 90 minutes you can only do so much. And since it is a documentary, the filmmakers were constrained by events unfolding before them, which was the GMO News of the Day.

Anyone paying any attention to food system issues knows that there is more to it than the movie covered.

That does not make the stories within false or misleading, tantamount to their claim of propaganda.

I started to invite the people on the list to discuss the propaganda allegation, to be part of an episode of the Talking Biotech podcast. Anyone that listens knows that I cover sustainable farming and biotech foibles too, as I strive to be even handed. I was approaching the invitation honestly, stating that I disagreed, but was willing to be convinced. 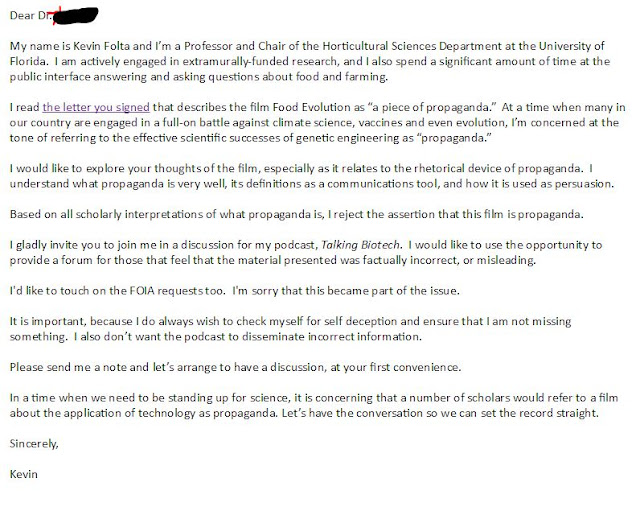 Read my unreasonable request and prepare to be outraged! This is a sample of the letter I sent to most of the people on the list. Some were different, personalized, etc.

I only sent a few here and there, mostly because I'm busy and I didn't have time to do the whole set at once.  Plus, I didn't want to reach out to everyone.  The reason for this is apparent at the end of this article.

The exercise was important because I preach that scientists need to get out of their tribes, make sure that we are not just talking to each other in an echo chamber.  This was my attempt to reach out to others that clearly disagreed with me on a point, and try to understand their point of view.

I received a note from Dr. Marion Nestle. She will not defend her use of the term propaganda, and is not interested in talking to me until they remove her words from the film. So seeing as though I have nothing to do with the film, I guess she won't be talking to me.
Michael Pollan kindly wrote back, but he's too busy with the next book to share his rationale for calling science, propaganda.

Eventually I did hear back from one of the others on the list.  I won't name him/her (let's go with the gender-neutral Prof. X, sounds cool) but my feeling is that others have connected through Prof. X and suggested that Prof. X serve as a spokesperson.

And so did Prof X engage me in scholarly inquiry and an opportunity to share thoughts in an evidence based discussion in an attempt to reach mutual understanding?

Not really.  Instead he produces a link to Eric Lipton's New York Times hit piece that cherry picked quotes from my FOIA'd emails to tell an untrue story.  Prominent scholars.

The gentle note from Prof X suggests that I'm just a paid stooge, "influenced by industry money." Other exchanges were pretty boring, mostly Prof X deflecting the opportunity to defend the propaganda claim, at one point saying, "GMO papaya cannot feed the world."  No shit Sherlock.

I'm really getting disappointed by prominent scholars.  They write a letter calling science propaganda, they shill-ize good scientists, and then refuse to have a dialog, citing an article in the New York Times that was loaded with distortion and a contrived narrative.  You'd think that prominent scholars might gauge my credibility from PubMed or Google Scholar.  However, that won't confirm their conclusions.

Bad Optics for the Berkeley 45

I did my job in reaching out, but they obviously don't want to talk about science and evidence.  It is about conjecture about other scientists' shilly motivations and film funding, not about actual information.  But we come to expect that these days, just not from academics, especially expert prominent scholars.

The science of GE papayas, Xanhomonas-resistant bananas, and other technologies shown in the film is solid.  The film's demonstration that these technologies work and that there are people working hard to oppose their use is very accurate.

So why people just starting out into the brutal science world would sign on to a permanent artifact that unfairly implies motivations of scientists and filmmakers that tell a true story, then denounce good technology as "propaganda" is beyond me.

A better letter might read, "Food Evolution tells one part of the story, but here are some other things to think about as you view the film .."

That kind of high-road discussion does not tear down others, disparage technology, or claim that someone's employer 20 years ago pulls their strings.

But we can't get to those discussions because of people parading around photos of lumpy rats and claiming a low-toxicity herbicide causes cancer.  We're so bogged down in dealing with the actual propaganda, that we can't begin to have real discussions that matter.

And they have an out. They can always say I didn't contact them, as I didn't contact everyone on the list. They are like the person on the firing squad that has the blank so they know they might not have done the deed.

People deserve second chances, and when they realize that it is unwise to trash people and technology to make their ideals seem more reasonable, their past indiscretions should not come back to haunt them.

But in 2017 if someone says something you don't like he's a shill, and if there's information inconsistent with your worldview it may be written off as propaganda.

A time will come soon when we can have that nuanced discussion about food and farming. Leaders and thinkers will enjoy honest discussion with a common goal.  Don't count on the entrenched prominent scholars of the Berkeley 45 to join us at that table.