It was Nazi guy and photographic sour-puss Joe Goebbels that might have said, “If you tell a lie big enough and keep repeating it, people will eventually come to believe it."  Nobody really knows for sure that it was The Goebbler, and ironically this quotation has been ascribed to everyone from Hitler to Martha Stewart.

It does encapsulate the phenomenon spawned by the 2011, long-debunked paper by Aris and LeBlanc, claiming to detect the BT protein (presumably from transgenic crops, but that control was never done) in fetuses and pregnant mothers. There have been a number of brilliant discussions of why this work is not credible, posted here, here, here. here and here.  I even discussed it here.

One of them is from New Zealand and the other from a French dude, two classes typically not immediately disqualified as corporate lackeys.

But those facts don't get in the way of GMO Free USA, a group that latches on to any report it can manipulate, regardless of its authenticity or scientific rigor.

Despite all of the well-constructed criticisms, they still promote the work as conclusive evidence of transgenic crop harm. Isn't that deceptive? 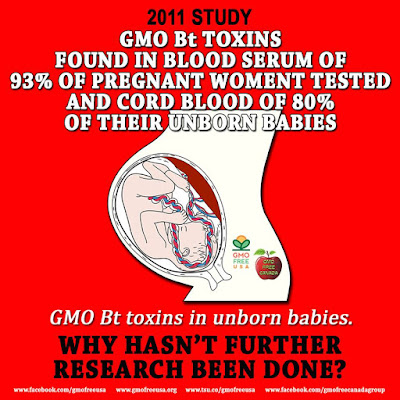 Why hasn't further research been done?  Because the first research was trash. No reputable scientist would waste their time and wreck their reputation chasing this nonsense.

Again, this is the attempt to persuade the middle, frighten mothers away from perfectly safe food by using such imagery and (now well-debunked) claims.

That should mean something.  If Aris and LeBlanc's claims were real, they would have published the follow up in 2012, maybe two more in 2013, and by now would have a complete dossier of how these proteins moved from corn to fetus, and how the corn consumed was different than the BT used on organic crops.  We'd know if there were biological consequences too. Other research groups would repeat and expand the study from the crop science and human health side.

But when the first work was incredibly flawed and over-interpreted, its death on the science vine is precisely consistent with the typical resting place for work that should have been more carefully reviewed and never published.  The paper could have been published, but should have said, "No clear evidence of Bt using this method."  That's what the data presented tell us.

Since it was published as an alarmist, over-interpreted work, it now is dead to scientists, but alive and screaming in activist circles, where people believe first, and ask hard science questions, well, never. 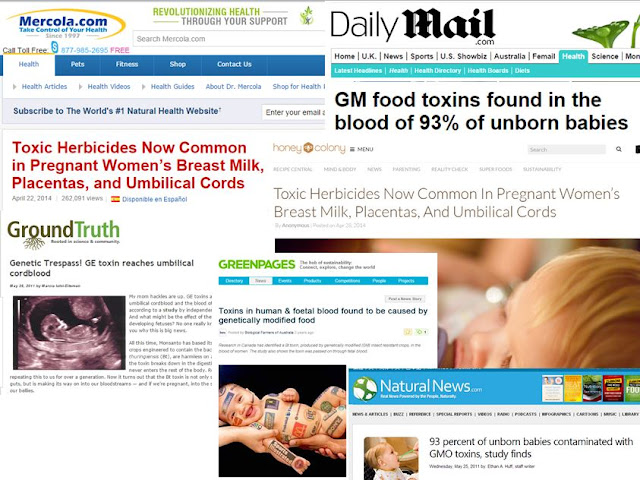 And what does the internet say?  On sensationalist websites science takes a back seat to vivid imagery of poisoned babies, where the intention is to frighten mothers away from perfectly safe food.

It pains me to write another blog on this antiquated, long-debunked nonsense.  However, it keeps popping up, just like every election cycle when some group of brainstems feels it necessary to introduce a bill to teach creationism and our 6000 year-old planet in science class.

Some fantasies last a long time.  Worse, they still are used to trick others.  Goebbels knew that propaganda was an important tool, that continued repetition of a falsehood had the potential to cement the lie in common vernacular.  GMO Free USA and others know that. Dr. Chuck Benbrook even reported the "umbilical cord" findings in a testimony to the Pennsylvanian House of Representatives Ag Committee on October 6, 2014.

Why do people still believe it?  It reinforces what they want to believe, that safe biotechnology, used for almost 20 years now, is somehow harming us.  They exploit the vivid imagery of poisoned babies to emotionally propagate that falsehood, and hopefully scare mothers, with often limited food resources, away from safe and affordable food.