Munich is Not by Florida; Soy is Not High in Formaldehyde

It means that your program, your assumptions, or your input data are wrong. These things are quite testable.

When you decide to not challenge those data, but instead publish a map showing that Munich is squarely in the Gulf of Mexico, opposing all other data and the claims of millions of rather dry Germans, it does not mean that you are brilliant.  It means you have absolutely no clue, or more likely, have some reason you want a major German metropolis to be a two-hour boat ride from Tampa.

When you are the map publisher that actually prints the deceptive map, what does that say about your integrity as a reliable information source? 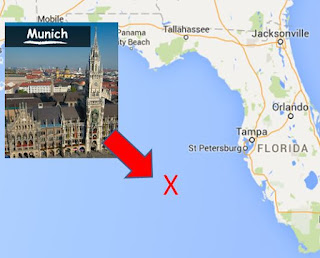 If your computer algorithm predicts a major European city is closer to The Everglades than the Alps,  you might reconsider your program, the input data, or your competence as a programmer. By all means, don't publish the map, or lots of well meaning drunks will drown looking for Oktoberfest.

I looked at this steaming deuce of a paper last week and hoped that it would just be ignored.  But alas, a dozen emails later, and a few "Ha-toldya" twitter comments and now I actually have to waste time noting why the paper is just about as awful as they get.  Biased, conflicted authors want an outcome and develop a computer algorithm to produce it, and it does not disappoint.

How to Scare Parents

If you wanted to design an experimental outcome that was scare parents and influence  political decisions, it might be effective to find something dangerous in their food.  What plant metabolite would you suggest?  Of the tens of thousands that occur in plants, nobody is going to freak out if you over-produce eugenol (the stuff that smells like clove oil) or ascorbic acid (vitamin C).  You need something scary, something evil-- formaldehyde!

Formaldehyde!  Of course!  This takes us back to the famously debunked fake data in the Stunning Corn Comparison, where they claim to have found formaldehyde and glyphosate levels through the roof!  So this new prediction validates and verifies that fake data in the soil test chart.

Let's visit the paper by Ayyadurai and Deonikar, published in Agricultural Sciences, a journal I've never heard of, and a journal with no actual impact factor.  The publisher is Scientific Research, which is on the 2014 list of predatory publishers.

The work, entitled,  "Do GMOs Accumulate Formaldehyde and Disrupt Molecular Systems Equilibria? Systems Biology May Provide Answers" was recently published, and one look is all you need to see agenda and bias, and a new dookie in the collection of peer-reviewed (by what peer I don't possibly know) journal papers that will be held up as conclusive evidence against agricultural biotechnology.

How does systems biology work?  It is a computational approach where a series of inputs, usually data from published work that are matched in silico to generate new hypotheses. It is a way to make predictions based on integrating existing data, and then statistically deriving a likelihood that the predictions may be correct.  The predictions can then be tested and the systems approach validated.

Now when a systems model does not match what we know, it says that the model is wrong. If the model puts Munich in the Gulf of Mexico, it says STOP, rethink the input data, assumptions or the algorithm itself.   If I'm the scientist, I don't publish that flawed model, I go back to the drawing board, look at my inputs and assumptions and start over.

But It Says Formaldehyde....

This outcome is likely exactly what the authors wanted to see, and allowed them to publish a verbose, poorly-written, goofy paper that serves an important political purpose to advance at least one of the author's interests.  More on that later.

The bottom line is, corn is probably the most biochemically dissected plants in terms of composition. Soy too. There is no evidence ever published or otherwise reported in a legit place that shows a difference in formaldehyde between GM and non-GM varieties of anything. These authors could have tested their prediction, and maybe they did, but there is no evidence of formaldehyde ever reported.

Munich is not in the Gulf of Mexico.

The paper would have been rejected out of hand because the writing is awful, the conclusions overstep the data, and the data come from inputs that are not reported and apparently do not come from peer-reviewed sources.

1.  The writing is pure rhetoric, the first line stating that safety is a "contentious issue" when safety of transgenic crops has been well established for two decades. Constantly referring to "GMOs" is meaningless.  It is not a scientifically precise term, and any transgenic organism should be studied on the merits of the gene and the organism it is in.  Are GMO microbes making insulin equivalent to cotton making Bt proteins?  No.

2.  It is unclear what data were used for input and where they came from.  They cite "pubmed/google searches" and list their search terms in Appendix A.

3.  What organisms, what were the transgenes, what tissues and what conditions were used in the input data?  Not terribly clear. My guess is that they actually used the numbers from the Stunning Corn Comparison.

4.  I want a sandwich, so I'm not going to keep going.  Bottom line is, they make a computational prediction and it is WRONG.  There are no data that support their conclusion, nor do they attempt to present any.


What is the Purpose of this Work?

First, what do we know about International Center for Integrative Systems?  Certainly sounds impressive!  Turns out it is a 501(c)3 non-profit organization, surprise, started by the lead author.  They have a variety of projects, including one that seeks to define standards for raw and organic food.  A little poking around the website and the agenda is showing.

The International Center for Integrative Systems may have a little conflict of interest, as they also promote foods that are not GMO.

The International Center for Integrative Systems seems like a well-financed woo factory. Read this. Yep, no conflict of interest in outcomes that harm safe technology and can bring in the donations!

The lead author is Shiva Ayyadurai, a guy that claims to have invented email and has a rather checkered history.  He's married to actress Fran Drescher (aka Bobbi Flekman) a staunch anti-GMO activist who has appeared in many venues stating her anti-GMO beliefs. (Note. I always liked Fran Drescher. She survived a rather nasty bout with cancer, she always was great in interviews, and while I never was a fan of her on prime-time television, I did feel bad when she was ill, but she's off-the-rails goofy now)

Could this simply be someone tied to the anti-GMO movement putting something appearing scientific and complicated with no sound biological conclusions into the public science space?

Ding! Circle gets the square.


Should Scientists Point Out These Journals/Publishers?

When predatory publishers, or journals with such lax standards allow such things to pollute peer-reviewed space, shouldn't there be some repercussions?  They are confusing the legitimate dialog, getting used by activists to put faux data with strong conclusions into an important conversation.

I think it is time that we make visible the publishers that manufacture the map placing Munich in the Gulf of Mexico, without ever asking someone to take a look first.

Going forward, can we all agree never to publish in Agricultural Sciences or any of the journals from the publisher Scientific Research?  If they have to tell us it is scientific research, it probably isn't.