Critics of agricultural biotechnology claim that there is no transparency and no independent evaluation of transgenic crop products.  Of course, there are many, many cases where academic labs are recruited to perform independent analyses.

When independent results do not match the company results, the project is DOA, at least temporarily.

When the independent results do match, and those scientists report them, they are admonished as shills of Big Ag.  The implication is that companies do not fund research, they fund the manufacturing of favorable results. 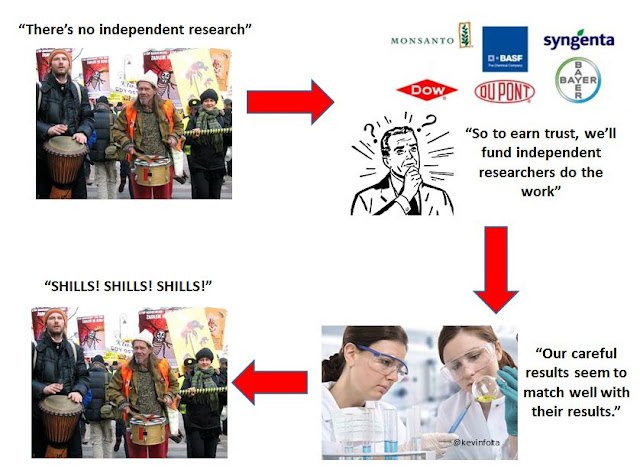 This came about because I found a website listing USA public universities and the funds donated to them by ag companies.  This is all public record.  The surrounding text said that university results could not be trusted because of financial influence. Who else should pay for the company's research?

The bottom line is simple, independent research is valued because scientists have specific skills, along with the tenacity and courage to tell the truth. A company potentially commercializing a product does not want something released that will come back to haunt them later-- remember, these are money-grubbing, evil corporations, bent on keeping shareholders happy and they can't endure expensive lawsuits and bad PR.

The people that make such allegations come from a place I don't understand.  I could not fake data, lie in a paper, or publish something I knew was wrong.  That stuff stays in print a long time.

But we're dealing with people who brandish an agenda, we know they feel like victims, and that being untruthful is an acceptable part of fighting their battle.

All together, it is a perfect storm of nonsense and hypocrisy, and the losers are the people that need good technology the most.