The anti-GMO believers have learned that the constant release of tenuous, unconfirmed, even fake, information is critical to their misinformation campaign, as it resonates favorably with the biotech-knowledge-less. Such nuggets of fraud are stitched together by social media, gaining momentum from wide acceptance among the willing, and are incorporated into the permanent body of their factless reality.

Last week at Sustainable Pulse I found this: 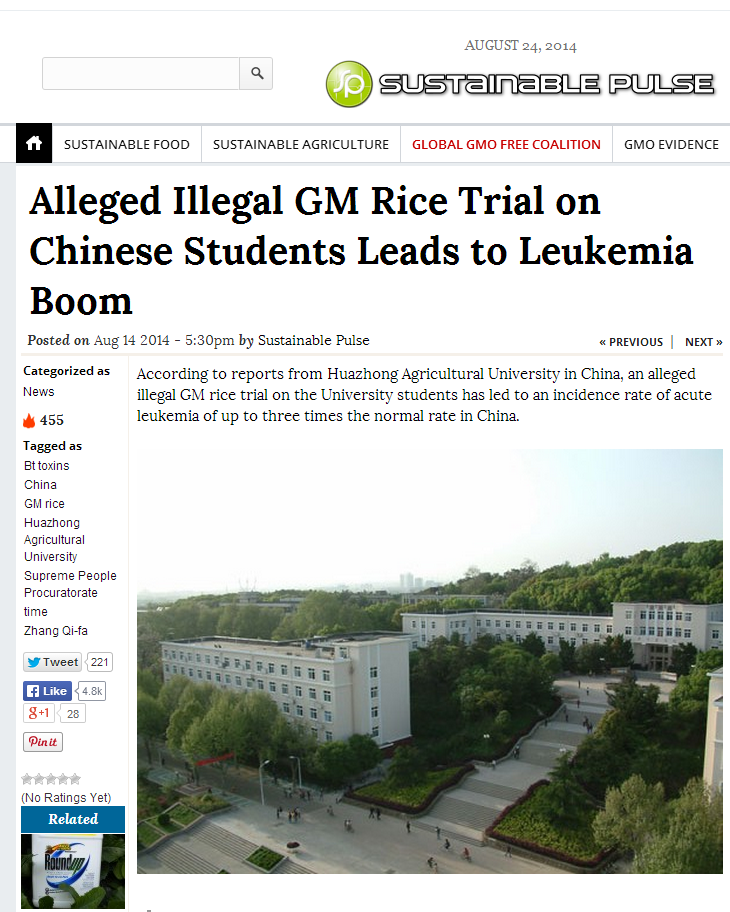 Leukemia Boom?  Sounds serious.  At least it is actually a picture of HAU.

The story claims that students are fed Bt rice in the cafeterias of Huazhong Agricultural University (HAU; the region's leading ag university), and now ten students are sick with leukemia.  Even if that was true, those numbers are hardly statistical reinforcement of anything, especially at a university where most days you can't see 50 m down the street. HAU is in Wuhan, China, and the air quality is pretty rotten.

I think, as usual, the whole story is trash.  Where did the story come from?

It was written by this guy in his blog: 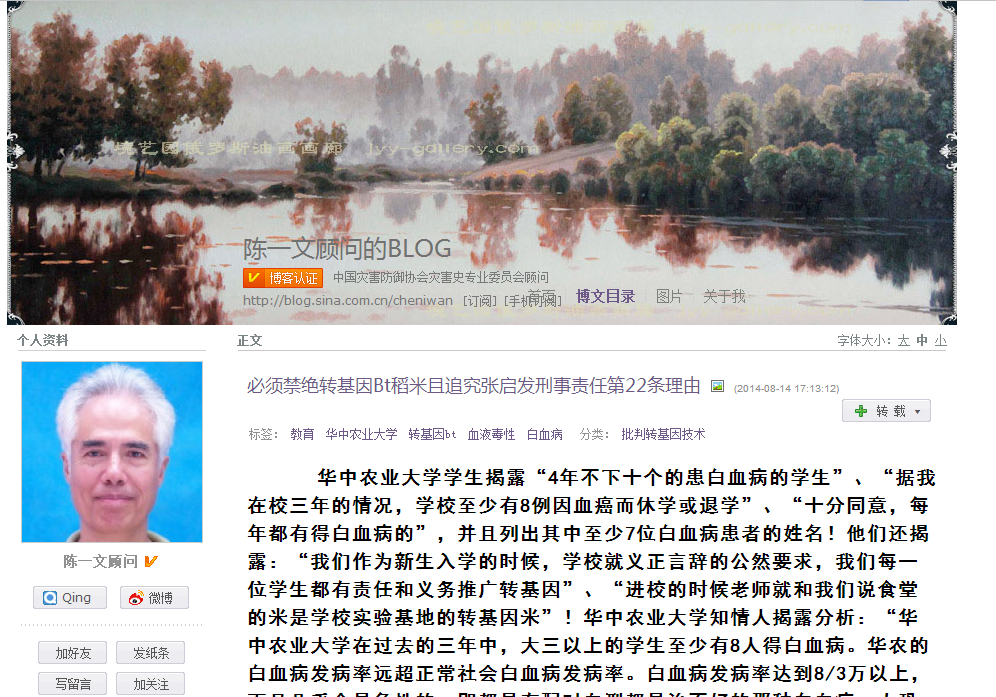 Chinese blogger Chen I-wan is not a scientist, but he knows GMO crops are killing everyone.
And when he's not writing a blog he'd doing yoga, flying, ballroom dancing, or selling books about the dangers of transgenic crops.

The guy's blog is a hoot, and a translation shows that the evidence supporting his claim is that awful paper by Mezzomo et al. that has been thoroughly debunked HERE and on Biofortified by Anastasia Bodnar, among other places.  The paper lacks controls, reasonable design, and the interpretations far overstep results. But he's sure convinced! 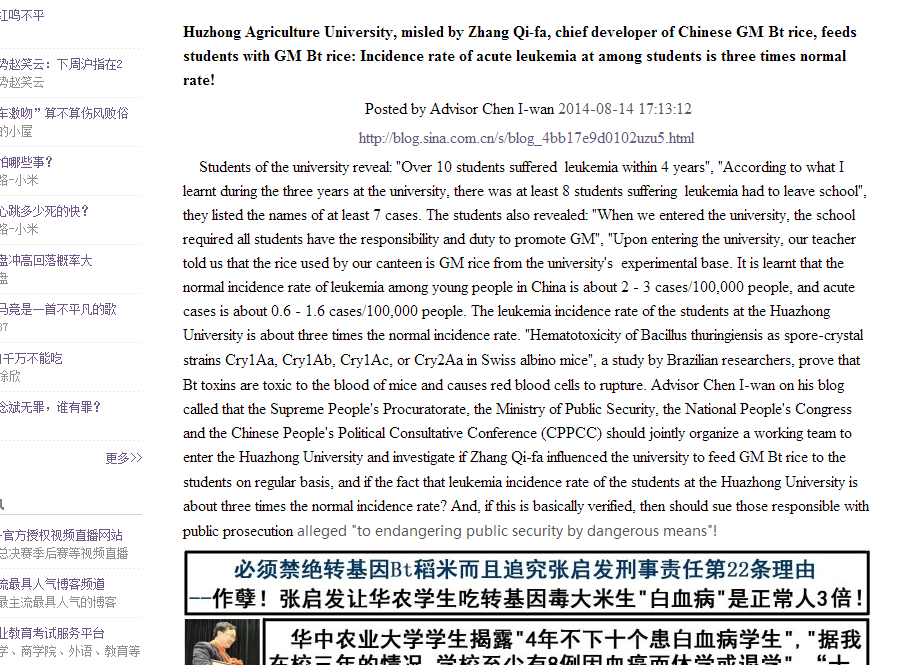 Here is the interpretation of the blog. Reads like a way to start hysteria.  If you don't have data, make up a story and hope nobody questions it.

The intellectual heavyweights over at Sustainable Pulse will believe anything and not poke it too critically.  Same here.  My favorite part was that the original blog has a comments section: 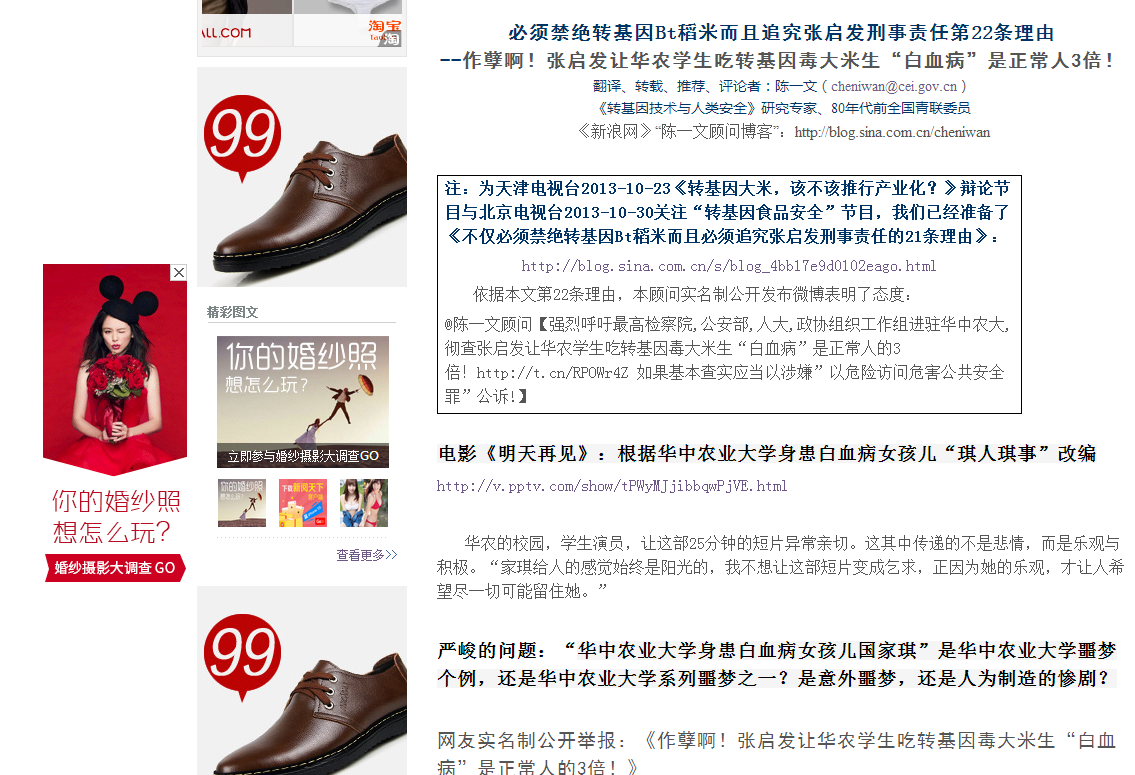 The comments section.  I'm getting an interpretation asap from one of the scientists in my lab. Stay tuned!   And that's about $15 USD for a groovy pair of loafers!

I was able to get one comment interpreted using online software:

From the "comments" section.  "It is a pity u make feces eating and r disgraced autism child killer. You r provided splendid payment from Monsanto 4 false news manufacturing!"

Unfortunately for them they picked a bad place to write about.  How many Americans even know HAU?  Maybe not too many.  However, I know HAU.  I have friends at HAU.  I've been there three times and am going again next summer.  The President of HAU is a friend of mine!

I wrote a note to one of my other friends here:

I sent a note to a friend there.  His name has been blacked out to save him hassle.

Seems like there is no such story after all.


However, if you Google "Leukemia" and "Huazhong Agricultural University" the top hits are all about the dying students, interspersed with actual research published from HAU on leukemia.

Once again, news travels fast, but bogus reports that satisfy the anti-GMO bias travel faster, install better, and add new bedazzling to the contorted fabric of misinformation that blankets the movement.

... and of course, I've been blocked from commenting on the Sustainable Pulse website.