Grandpa Folta liked Consumer Reports, the magazine that would help him find maximum value in his oil filters and bacon bits. They have been recognized for a long time as an objective source of critical side-by-side analysis of consumer goods, and I've made decisions based on their recommendations. The magazine is still popular, and is well known for its independent evaluation of consumer goods, helping the consumer make better buying decisions.

My friend Chris alerted me to a little Consumer Credulity. The latest version shows that even an source claiming objective and technically sound analysis, is not immune from the bias of bad information.  A recent article on Milk Alternatives: Should You Sip or Skip provides a short evaluation of the various consumer milk substitutes, stuff like coconut milk, soy milk, almond milk and other dairy alternatives. 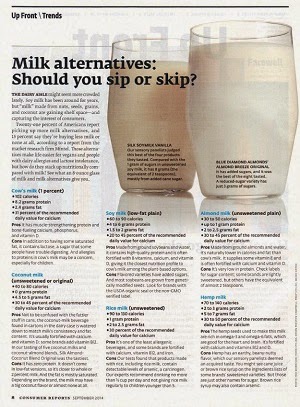 You can read about the pros and cons of milk substitutes in the latest Consumer Reports.  Unfortunately their reviewers have caved in to non-scientific influence.  That's a mighty blow to a magazine claiming to be able to make objective analyses based on evidence.

The article lists the pros and cons of each beverage.  They basically throw all of them under the milk truck for one reason or another, mostly for trace amounts of heavy metals that are biologically inconsequential, or for having close to no nutrition. Soy milk is reported to have some unique "cons". 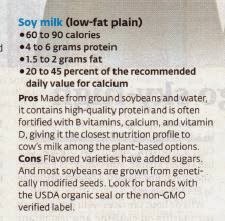 The recommendation is not just scientifically wrong, it is an ad for the Non-GMO Project!

1.  It gets the science wrong by saying that it is "grown from genetically modified seeds" as a "con", when there is absolutely zero scientific evidence to why being GM is a detriment.

2.  The magazine then endorses organic and non-GMO verified (the Non-GMO Project) brands.

Isn't Consumer Reports supposed to make decisions based on evidence?  Isn't endorsing a different brand based on no accurate scientific information in stark contrast to how this magazine should we evaluating products?

This is a major blow to their credibility.  If they can't get this simple science right, how do we trust them with more important products like medicines or tires?