DeGrasse Is Not Always Greener in the Other Science

I was grateful when Dr. Neil deGrasse Tyson accidentally stepped in science's ripest dookie- anti-GMO pseudoscience.  He's getting to experience first hand what it is like to be a scientist trying to communicate sound science with the most rabid bunch of clueless know-it-alls ever amassed under a single banner.

When asked last week about transgenic crops, he said that humans have been manipulating genes for thousands of years, so "chill out".  He's exactly right.  Humans have been taking the trash that nature gave us and folding it into useful crops for certainly the last 10,000 years. The process is random and wild, and only since the dawn of biotechnology do we have any handle on what genes we are moving and how we do it.

However, far be it from the anti-GMO movement to accept scientific facts.  To them, Tyson is a sellout to corporate seed greed, a Monsanto Collaborator, and probably someone that Mike Adams wants dead.

I wrapped up my Saturday science day and opened the browser only to find this gem: 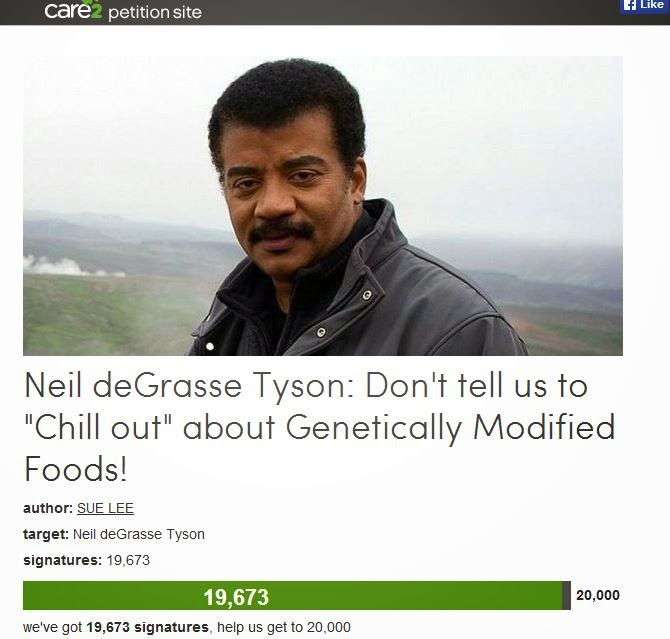 20,000 people capable of logging on to the internet are clearly smarter than one goofy Monsanto-owned astrophysicist.

It is a petition-- that's right, a petition, to tell Dr. Tyson to not tell people to "chill out" about GM foods.

A petition.  A device usually used to invite a change in policy, here it is being used to coerce a scientist out of speaking, well, scientifically.

The good news is that some of the petitioners take the time to provide rationale for why they want Dr. Tyson to not tell them to chill out.  It is tragic comic gold.  In no place have I recently read such a public display of mass ignorance, criticizing our generation's greatest voice in science.

Let's look at some of the gems:

Mrs. Sandy Pidgeon from Montana expresses her concerns about that roundup-ready wheat.  She apparently suffers from MS, so she's sensitive to the food she eats.  Unfortunately, she is ready to voice out against the GMO wheat-- when there is no GMO wheat.  It was never commercialized.

Ms. Cheryl Berdahl from Nevada notes that "All of Europe can't be wrong".

I have two words.  Soccer.  Hasselhoff.

Ms. Jessica Kraskian from New Jersey clearly wants Tyson replaced.  He doesn't verify her biases the way Sagan did, like when he said the earth was a pale blue dot in the vastness of space and that we need science more than ever.  Sagan would agree 100% with Tyson, and would call the anti-GMO movement another facet of the Demon Haunted World.  Maybe a scientist like Jeffery Smith could tell everyone about how to cure cancer by burning a smudge stick and breathing in the vapors through an eagle feather.

Mr. Kevin Klasman swings and misses with his exposition of scientific illiteracy.  He buys into the bogus "infertile crops" narrative and talks of "more aggressive" pesticides, which is exactly not the case. But hey, Tyson is the bonehead, right?

Rocket surgeon turned internet police guy Mark Crossland peels himself away from the Bararck Hussein Obama Birth Certificate site long enough to give Tyson a pretty firm spanking.  GMOs "change genetic structures" according to this guy, which I guess is true, but it happens at a much lower rate than what happens in traditional breeding, and we understand the genes that are being affected. I'll remember when I teach molecular biology class next year, "Anytime you modify something DNA you F it up".

Mr. Garry M. Doll of Pennsylvania chimes in with some surprising news-- GM technology is not science. At times I've thought of it more of an art form, but in general it is pretty sciencey.  I'm also guessing that science dudes like me know about epigenetics (actually, they discovered it) and maybe we do know something about genetics.  My guess is that Mr. Doll is plagued with recessive genes that block the distinction of reality versus fiction.

Lee Beffort in Nevada recounts a common allegation-- Dr. Tyson is now sold out to Corporate Masters, many others site that he's a shill for Fox News. You know, the corporation that tells scientists to talk about how the world is being threatened by antropogenic climate change.  They can't have it both ways, can they?

Dr. George DeForest of Texas, a state known for its high scientific resolution, suggests that Tyson is not qualified to speak on transgenic crops because his scientific training in astrophysics.  I'm guessing Dr. Deforest is a podiatrist.

This is the very tippy tip of the iceberg and I'm going to use this platform to generate lots of responses and even some video.

Thanks Dr. Tyson for getting involved in this topic.  You've stirred a pot that needed to be stirred, so let's get all of the public advocates for science on board to stand up for science, and stand up for biotechnology!