This is likely one of the worst papers ever to be published.

However, to some, it is stellar evidence. 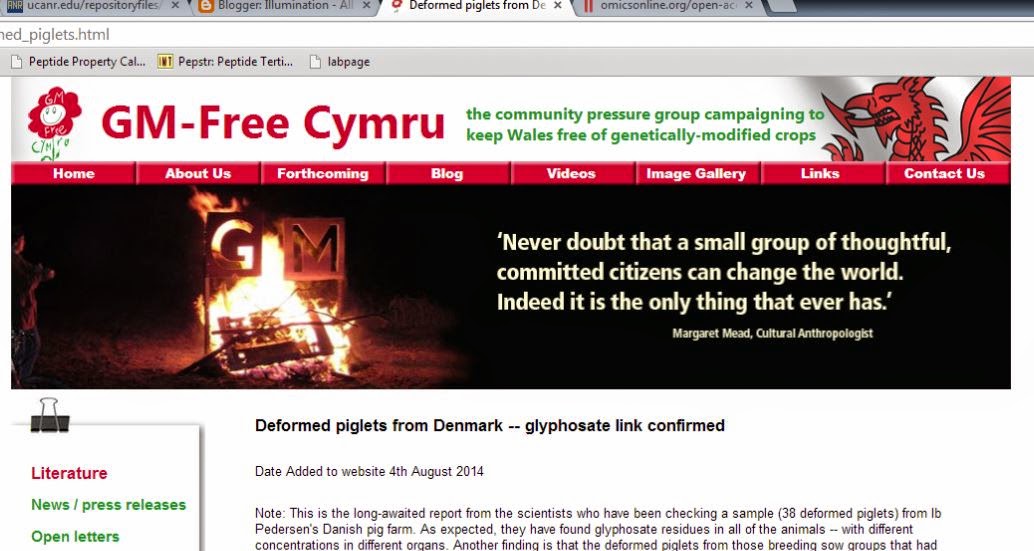 Here's one website claiming that the link between glyphosate and piglet deformities is now CONFIRMED!

At least that's what many in the anti-GMO community think, and a recent paper is all the proof they need.  A new steamer from Monika Kruger's group in Germany provides low-power investigation oozing with no science, heavy rhetorical flourish, and missing controls. The whole thing is designed to scare the bejezzus out of the credulous.  And it works!

I only found this because an anti-GMO soul on a comments section pointed to it as "irrefutable evidence tying glyphosate to birth defects".  The work appears in May's J Environ Anal Toxicol. First, articles in "Omics" journals are usually pretty lame. They are a well known predatory publisher that will publish anything if the price is right.
Second, Kruger's group always seems to find a problem, yet their reports are devoid of experimental methods and clear statistical treatments. This report has some interesting numbers, one paragraph of results (that make no sense) and a page of pictures of dead piglets!
I don't understand the second paragraph where the authors say that there were no differences in concentrations.  Then they say the highest were in the lungs. Remember, this one paragraph is the parallel to the Results section of a conventional scientific paper.

In the usual form, this group isn't quite sure what the results of their study are exactly.  Are there differences or are there not differences?

The data in Table 1 tell tell their story... of course, no positive or negative controls, so you don't know if the assay is just reading noise.  No standard curve, so hard to know how they can quantitate this so accurately!!   They don't say in the paper.


Like any good paper smearing glyphosate or transgenic crops, the authors choose to conveniently omit the controls. That's my guess.  They have to know to use controls, and probably do, but they look the same as the experimental treatments and that's just not shocking (see Figure 3, Seralini et al., 2012 aka Lumpy Rats). To do this right there should be a positive control (organs spiked with glyphosate) and a negative control (pig organ never exposed to glyphosate).  Classic sloppy science!  Awful!

The clear problem is that these are all pigs from that one Danish farmer that claims the relationship between glyphosate and pork defects. If he really believed his claim and wanted independent analysis, he might send it to an independent lab for objective analysis.  Instead, he sends it to Monika Kruger's group, one of a handful of labs worldwide that somehow can always find a boogeyman tied to GM crops.
Without any controls, how do we know the farmer (with a GMO axe to grind) doesn't soak piglets in glyphosate before sending them for analysis?  That would give Kruger's lab the benefit of the doubt.  The other question is if they really detected anything at all.

There is no standard curve, and no negative control. If the detection method (ELISA; an antibody-linked colorometric assay) cross reacted with anything in the piglet juice, or if there was natural background in the assay, how would we know?

And the second page of this report is just pictures of piglets.  Not sure what it means, other than presentation for shock value.  That's it. 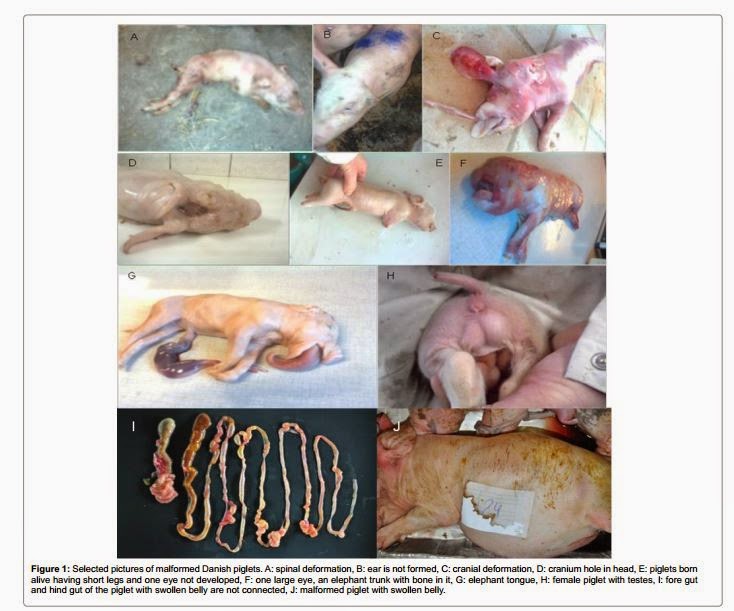 
How does this junk get published without controls!!!
Let's talk about what they claimed to find.  The authors claim finding 80 ug/ml in lungs, maximum, but in the table it is 80 ug/g.  Are they talking about ml of extraction fluid or starting tissue?  Unclear. They also need a lesson in use of significant digits.
Let's say that's true. 80 ug/g starting tissue.  That's the same as 80 mg/kg.  When glyphosate is sprayed on the crop it is about 20 mg/square meter which provides about 0.29 kg of soy***.  Spraying is done long before the flowers and beans are on the crop (see Inconvenient Glyphosate Math).  You see the problem.  There would have to be some sort of mystery mechanism sequestering glyphosate in the fetus, which is inconsistent with everything we know about its pharmacology.
Plus, the MSDS clearly points out that there is no evidence of teratogenicity in a suite of animals examined.

Once again, a real dud of a paper becomes part of the evidence base for anti-GM.  I would not be proud of accepting this work and claiming it as convincing evidence. I'd be embarrassed.  But the anti-GMs have a thin skill set and ambitious keyboard.  They'll argue that this is appropriate science, and excellent evidence of glyphosate's harmful effects.

And the best part is that it just keeps on coming.  The fact that this is their standard for conclusive science says a lot about their scientific tenacity... it is severely absent.

***  please note that I this value was changed on 8/20 from the original posting of 2 kg.  That number was incorrect, I forgot to add a decimal place!  This was pointed out to me in the comments section and has been corrected. It does not change the point of the paragraph.