What Was the Real Message in Last Night's Cosmos?

It was Sunday night and I nestled into position.  The television flickered in a darkened room and the swelling music of the Cosmos remake primed me for another trip with Neil deGrasse Tyson flying in his hybrid toe nail clipper / kazoo.

The story was about Dr. Clair Patterson, the University of Chicago (later California Institute of Tech) scientist that sought to identify the age of the earth by measuring lead levels in a meteorite fragment.  Lead is the end product of radioactive uranium decay, so if you can detect and quantify lead in a sample from the beginning of the universe, you can estimate the age of the universe.

The problem was that his readings were crazy because there was lead everywhere. Why?

Turns out, all of the experimental noise he was detecting came from residues of leaded gasoline. Exhaust and lead dust was prevalent everywhere before the preparation was banned in the 1970's.

The story tells of Robert Kehoe, a scientist from the auto industry who championed elaborate studies designed to diffuse fears of lead being dangerous. He clearly was promoting a bogus agenda that insulated the auto and oil industries from culpability and kept profits flowing. And THIS is what Mother Jones grabs on to.  See, scientists are all corporate-owned weenies.  EOM. 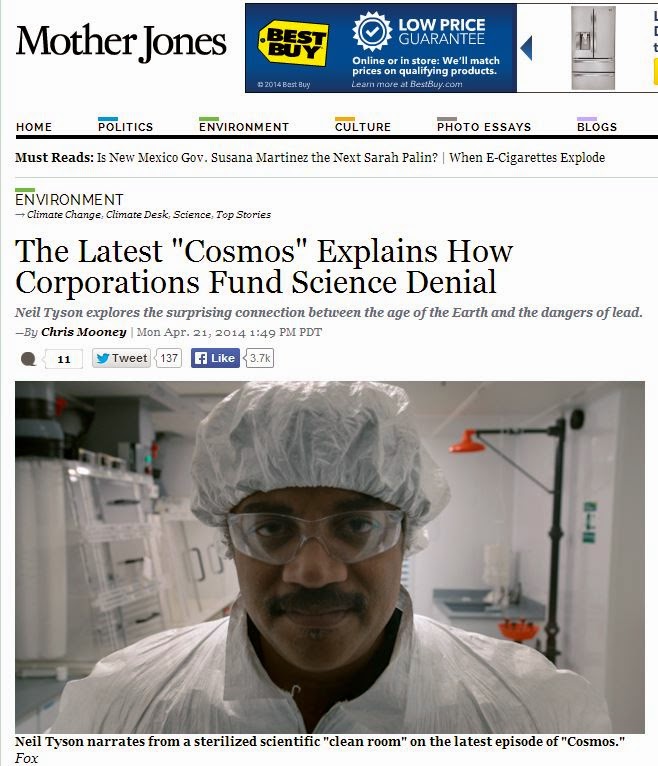 I hope Tyson is simply dressing for the clean room and  not (mildly humorous 1980's hair joke removed because it was clearly going to be purposely misrepresented by those trying to hang me on something).  That (period-specific hair style worn among some men, including African-Americans) died shortly after leaded gas! Ironically, Mother Jones points out the evils of corporate financial sponsorship, but then urges you to shop Best Buy on the same page.

Kehoe being a stooge for Big Oil was not the story here.  The real story was that Patterson used tools of science to identify the problem-- that lead was in the environment and that cars and humans were the cause. He warned of the problems, stood up to corporate goons and let his integrity and honesty shine.  He stood up for the truth, for science, and followed what the data said.  Period.

That is the real message of Cosmos last night.  Science won, corporations lost, mostly because of the efforts of a scientist that saw the data, stood by it, and fought for the truth.

I was a little disappointed with that interpretation by MJ-- then I see it was written by Chris Mooney, a guy that has his head screwed on right...

My guess is that he was referring to the reality, that anti-climate change science is supported by those with an interest in fossil fuels.  Anti-biotech science is funded by Greenpeace and others that don't want this technology to reach those that need it.  I'm guessing that's how he intended the slant.

Unfortunately, it will be interpreted by the masses as another key piece of evidence that deGrasse Tyson, one of our science heroes of our time, admits to corporate collusion and scientific misconduct defining the outcomes of scientific discovery.

And of course, you know how this is going to end... 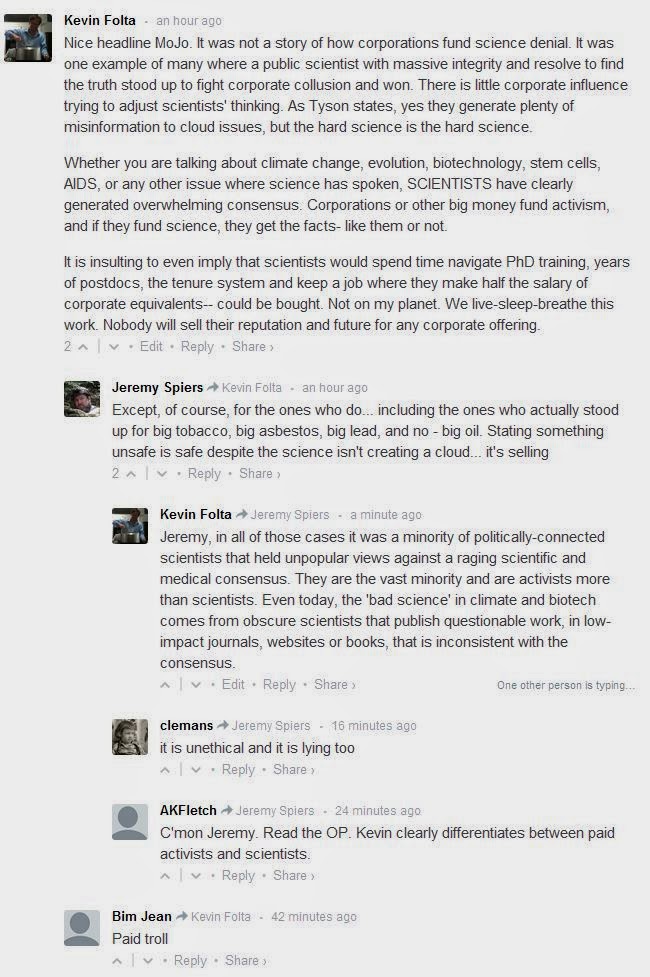