In March of 1994 I stood on the scale and it read 235 lbs.  I looked in the mirror after a shower and the Michellin Man was starring back at me. I was a grad student, worked 16 hour days, didn't eat right, no exercise, and lots of beer. Genetics were not on my side either, as everyone else in my family had weight problems and the issues that went with them.

It was time for a change.

I lumbered across the parking lot of my apartment complex in a slow jog that was physically taxing. I probably squeezed out 400 yards total, but I'll never forget that feeling.  Things had to change, and that first foray across the blacktop was a turning point.

The fact is that GMO technology could make plant products that fill gaps in the vegetarian/vegan diet, making it more attractive to those interested in the healthful benefits of a plant-based diet that are uncomfortable potential deficiencies.


One of the other shifts was to an entirely plant-based diet. Meat cost too much, I had no money, and I thought if I could cut out processed food and meat, I could save a few bucks and maybe be healthier. How true it was. Within one year I was at 165 lbs and running 50 miles per week

Of course, that was neither healthy nor sustainable.  Eventually I'd end up between 190-200 lbs to this day, with some excursions upward that remind me to dial up the exercise or dial down the beer and junk food.

After losing the weight I never wanted to go back to an animal-based diet.  The food smelled greasy and unappealing.  It was a turn off to be eating muscle tissue.  I never was a militant vegetarian speaking out against meat, I never forced my decision on others.  I never asked for a special accommodations, and most people never knew I was not a meat eater.

I enjoyed an ovo-lacto vegetarian diet for 16 years.  In 2010 at the age of 43, I found myself suffering through recovery from competitive sports and workouts.  Fatigue, muscle soreness... the doctor suggested incorporating some fish or some meat to round out protein I was not getting from my normal diet.

It worked.  Long story short, my first meal off-the-wagon was a BBQ sliced pork. I got it down, and a few meals later was feeling well again, but enjoying meals less.

To this day I don't care for eating birds or beef.  Pork is okay, and ironically the more you disguise muscle, like grinding it into sausage, the more I like it. Probably 80% of my calories come from plants, 10% from dairy/eggs and 10% from meat.  Still, if I had one meal to pick it would be fresh vegetables from my garden or local farmstand in a big salad with dried cranberries and nuts. Hands down.

I get the vegetarian thing and wish we all did more of it.  That's why I was so happy to get the invitation from Vegan Chicago to come talk about GMO foods.  Here were some people concerned about science and diet, and realized they might have the "science" of GMO=bad wrong.  I have many vegan friends from this talk to this day that understand how GMO may actually help the issues around food, contributing toward more vegetarian/vegan choices.

This is why I'm just shocked when I see Veg Expo 2014 and see they have a markedly anti-GMO agenda.  Worse yet, they invite Jeffrey Smith as a "world expert on GMO".  As I've discussed, if you want to see one movie that is based on fear and little science, watch "Genetic Roulette".  If you want to see a smear on science with no scientific base visit Smith's Institute for Responsible Technology. 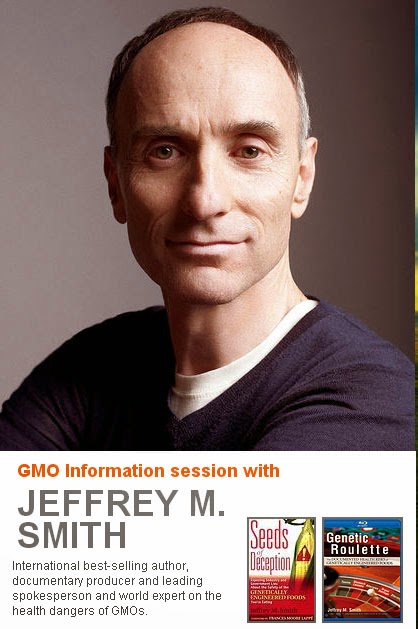 Why would an important food movement with many outstanding facets to offer attach themselves to a non-scientific agenda inviting Smith as a "world expert on the health dangers of GMOs"?

The general public still sees vegetarianism and veganism as crackpot fringe ideas with little scientific merit. Instead of inviting a scientist to talk about how technology can enhance veg/vegan options, now they can all get scared silly by silly Smith's non-science nonsense. It simply turns off the science minded in their cause, leaving on the malleable emotional folks that make any organization a drag.

They could invite an actual scientist that cares about vegan/vegetarian issues.  What if you could safely engineer plants to produce the nutrients missing in a veg/vegan diet?  What about plants that produced more vegan-needed amino acids (e.g. lysine, trypophan), vitamins (like B12) & trace elements (like iron)?  All of this can be done with metabolic engineering, it has been done!  What if plants could be developed from GM that were more amenable to processing in veg/vegan foods like garden/boca burgers, etc?  That's the tip of the iceberg!  Science can make your cause stronger, but instead you invite a non-scientific fear monger to address this conference.

The risk they run is alienating scientifically-minded individuals with similar health/food/ethics/environmental concerns. They trivialize a conference and lead people to question its scientific foundation. They also tie their commendable concept to a known activist hack that speaks from a place of fear and not science.

If it were me I'd move away from the fear-based nonsense of Smith and invite a forward-thinking scientist to speak instead.  Talk about he future of food, the future of vegetarianism and veganism and how GMOs might contribute to safely and effectively advancing these important ideals.