Seriously.  I've been following the announcement that Jeffrey Smith is appearing as the science expert at Veg Expo 2014 in Vancouver, BC.   I'm disappointed, but also blown away because I usually find the hardcore veg/vegans to be a more sophisticated bunch and generally in tune with science. Today I found out who else was part of this scientific extravaganza!

Jeepers Canada!  You're better than this and certainly yous vegans and vegetarians deserve better, eh?  This panel is taking on a subject it does not know much aboot.  You're about to get hosed!

Actually, veg/vegans-- you are being set up for manipulation.  Some local anti-GMO group (like Left Coast) is not sponsoring this to support your diet choices, they are using this to appeal to your dietary choices to infect you with anti-scientific nonsense. 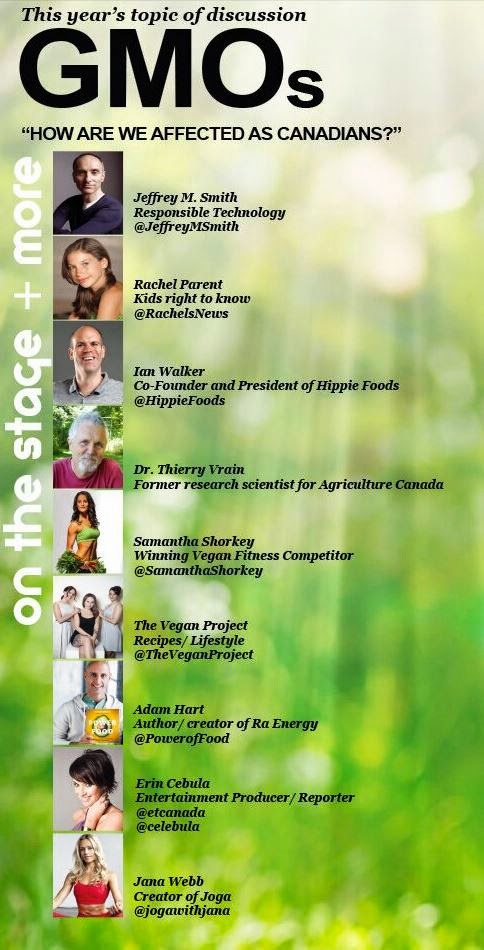 How do GMOs affect Canadians?
Let's ask this esteemed group that know nothing about modern biotechnology.

What a line up!

1. Jeffrey Smith -  We'll someday soon look at his movies the same way we now look at "Reefer Madness".  It is baseless, alarmist propaganda, scientifically bankrupt and created to scare.  With the internet and science moving so rapidly we should be able to hold him accountable in the next decade. I feel bad for the guy, he's on the wrong side of science and will land squarely on the wrong side of history.

2.  Rachel Parent -- As I've said before, I like Rachel for being an articulate young woman and standing up for what she believes.  However, a big part of her maturation into a strong and informed woman will be to learn to stand up for what she knows.   I hope she studies science and learns to think critically.  It is sad that she is being used to promote un-scientific nonsense.

3. Ian Walker -- The President of Hippie Foods and Left Coast Naturals has a strong anti-GMO record.  He is quoted on the Organic and Non-GMO Report as saying, “Our products are all about staying true to the way nature made them, GMOs stand for the opposite."  Clearly he's not a scholar in crop domestication or what "natural" really is.  Nature didn't make much that is in his product line.  Every single item was graced by human intervention in genetics.

4. Thierry Vrain - A former scientist and leader of a Canadian biotech effort, he now speaks on the dangers of GM foods.  He has some cred from publishing good science in the 1980's. Today he's an island in the scientific community, and is one of the people that leads the rest of us to wonder what the heck happened to that guy... why did he bail out on his training and use of evidence to make a conclusion?

5.  Samantha Shorkey-- Winning Vegan Fitness Competitor. An article of the top 10 foods for vegan athletes says, "Consuming GMOs (genetically modified organisms) can create health complications." Once again, a clear statement that another member of this expert Canuck-heavy panel has no idea what they are talking aboot. She looks like she has that fitness thing nailed down-- let's talk science sometime!

6. The Vegan Project -- Seems like a nice idea built around a good site for veg/vegan, but they do have a few mentions of "the harmful effects of GMOs".

7. Adam Hart -- Not much about his expertise on GM issues, but certainly an author and snack-mix purveyor with something to gain by vilifying transgenic technology.

9.  Janna Webb -- Creator of Joga.  Sloppy typewriting and poor proofreading once left many wondering about the exciting new "Joga" Class at the local gym.   Actually, a little look at it and it sure seems better than yoga.  Again, not a big history on GMO science.

So there is their slate of presenters!  Seems like they all have a bone to pick or something to sell, but not a whole lot of hard science coming your way!

Bottom line vegetarians and vegans- you are being swindled. I'm betting it is anti-GMO groups behind this and nothing to do with veg/vegan at all.  I won't go into details because you are smart enough to figure this one out.