Your Ancient Past, Weaponized

Back before there was Drunk History, back before The Man Show, there was media circulating that targeted the shaky hand that held the urine-soaked wallet.

My friend from high school, Herb Rosen, took his experience of bartending in Chicago's dives and opened his own place-- Liars Club over on Fullerton Ave in Chicago.  It was (is) a crusty place in a (then) no-name neighborhood that had a KISS pinball machine and $1.00 drafts of PBR.  It is still there, still a dump, but the best place in Chicago for a cheap beer and Misfits or Decendents on the jukebox. It was where an entrepreneurial effort of catering reading material for late-night misfits would gain some traction...

During high school in the 80's my friends and I were basement publishers.  We printed media called "fanzines" -- photocopied reviews of bands, music and other sundries.  It was a place for creative energy and clever writing before the internet gave us an instant, worldwide venue.

We also played music, recorded video, did a lot with costuming and always had an entrepreneurial slant.

During that time I took a lot of notes and did lots of artwork.  I had hilarious friends, and documented our delinquency furiously on my HP 286Mhz processor with 40 MB of hard drive space.  I compiled hundreds of stories.  We'd sell our writing and music reviews for fifty cents or a few bucks, mostly at punk rock shows or indy record stores.

But soon it was time to take fanzines to the next level -- self-publishing small books.

It was 1994 or so, maybe 1995. Probably both.  I was in grad school, living in Chicago and being paid $12,000 a year to TA courses.  To avoid student loans I shoveled snow overnight to supplement income. Start at midnight, done at 5 AM and exhausted on any night when 1" of snow or more was predicted. Eight bucks an hour and driving around three other losers in my 1981 Mercury Monarch to bank parking lots and residential driveways to hoist heavy, wet snow. It was awful. There had to be a better way.

I went back to those old stories and then compiled and illustrated several works, usually also featuring writing from my friends.  Greybait! An Insiders Guide to UFO Pseudoscience, Carp Angler (alternative fishing), Alcoholics Unanimous - United We Stagger, and the EAT THIS! cookbook. All were printed at bargain basement photocopy joints and bound in duct tape and/or big staples.


Others were constructed but never printed.  It cost about $100 to do the printing and I just didn't have that kind of cash laying around. I still have an AT hard drive with a few good pieces that never saw the light of day.

Self Publishing, and Pre-Amazon Book Sales

As I'd meander Chicago's nightlife with a messenger bag of self-published texts it became obvious that this was an audience excited to spend a few bucks on a traveling salesman's wares. Whether it was tamales or flowers, stolen jackets or CD's, Chicago's early 90's dive bars were a flea market wrapped in a fog of cheap booze and clove cigarette stink.

There were mail orders and stockpiles for sale in indy record stores (yes, that long ago).

I was happy to make a few bucks. On an average weekend I could sell a few dozen.  Lab work all day, book selling at night.


AU- A Book for the Inebriated

Throughout high school and college I complied many stories related to excess imbibition. I observed others go overboard, I did myself quite a few times, and there were many stories that went along with that unraveling.

Many people have similar stories, most didn't bother to write them down, and certainly most didn't own them.  But the experiences I had with friends were priceless, and our successes and mistakes, victories and foibles happened.  They did.  They happened, and I wrote about them. I absolutely stretched the edges a bit too to make stupid college stories remotely interesting.

The stories resonated with late-night drunks.  When compiled into the self-published book they found favor with many that could relate to the content, or just were too stewed to not notice they paid five bucks for a stupid self-published book.

Either way, I was happy to make a few bucks, sell a few books, and disseminate a few smiles from silly stories and exaggerated claims.

A copy of Alcoholics Unanimous sat on a shelf in my home for over 20 years.  I never looked at it.  It was just there, the stories growing old with time and becoming more irrelevant as the world became more sensitive to the dangers of alcohol abuse, the hazards of drunk driving and long-term effects of drinking.

But to someone wishing me harm--- this secret volume was gold.  Pure gold. 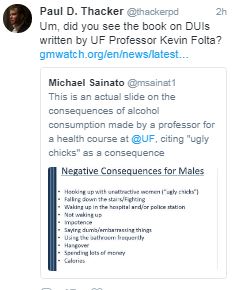 These ancient texts were long dead, lost in a Chicago gutter, used as toilet paper in a bush, or traded for smokes.  Until now.

A malicious release of this stale document to the anti-GMO movement would be perfect.  Here's something with Folta's name on it making light of a current issue, and we can punish him for it- 23 years later!

Last week the work was taken from its dusty resting place and released to GM Watch where they promptly posted a page about it-- happy to add it to the years of smear they publish about me.

But to folks like Paul Thacker, Kavin Senapathy, GMO Watch and my malicious ex spouse (who is featured in the work and used to help me sell it) -- they could now parade this work around as evidence of my questionable character, and use it to soil social media with quotes from the text that were simply exaggerated stories, many fictitious, that were funny to some people at the time.

When it was written it was the early and mid 90's.  We had very different feelings about social edges of substance abuse.  Look at how we've revised our social tolerances toward pot, opioids and alcohol since that time.

Personally, we all evolve.  What's funny then isn't funny now. What was acceptable then, is not acceptable now.  I did a beer bong in 1982.  Not since.

But one thing that hasn't changed is the length that people will go to hurt others.

Over the years I have accumulated a following of haters, folks that will do whatever it takes to harm me, my reputation, or my ability to serve others, at every turn.

Senapathy, Thacker, GM Watch, and a cast of a thousand bots have now raised this ancient text as concrete proof that my 31 years in public science is somehow devoid of merit.

This silly, outdated work, gone except for a copy fed to them purposefully in the name of malice, is their proof positive that my time in classrooms, my time in retirement homes, my 80+ peer-reviewed papers and hundreds of graduated students-- are meaningless.

The goal-- to have me further maligned within my institution, discredited in the science communication community, and removed from public service.  That's a swell idea.

The good news is that the world has mostly yawned, probably because they did dumb stuff once, then grew up too.

To those of you that see this re-animation in the name of smear for what it is-- I thank you.

Back then, it was fun too. We did mountains of stupid things involving clown suits, explosives, and the early internet.

I'm guessing that all of these things will now emerge and be misrepresented as much as possible, in an attempt to cause me career harm and stir public distrust.  That's fine.

Ultimately I think folks are smarter than that.

So to critics, go ahead, cast that first stone.  But keep in mind that the person you harm with it might be someone that is working hard for the same goals you find important.  By taking out your target do you really help your cause, or do you harm the greater good and come off as petty in the process?

That is an important question to answer.


(And I'm sure that hostile interests are working hard to find those other titles....  send me a copy if you do.  Thanks)