Golden Rice, Misplaced Activism, and Who Do You Trust?

This blog raises an important question about who you choose to trust, and how easily they sway your opinions. When you read scientific information on the web, do you believe only what confirms your biases, or do you think critically about the information?  Are people manipulating you?

First, I love the idea of Golden Rice.  In many parts of the world food staples contain little Vitamin A, so those consuming rice, potato, wheat, maize, cassava, and banana are not receiving adequate nutrition.  It is essential for vision and optimal health. The result is a scourge of Vitamin A Deficiency (VAD) causes blindness and disease throughout the Developing World.

Golden Rice has been genetically engineered with two genes to produce beta-carotene, the nutrient in carrots and leafy green vegetables that is converted to vitamin A in the body.

Golden Rice is not without its issues. The levels were low in the first generation products and not necessarily in culturally-acceptable forms of rice.  Not everyone enjoys Uncle Ben's Boil-In-Bag Delight.

Plus, the Golden Rice people were outright dismissive (putting it mildly) when I asked them to be guests on the Talking Biotech Podcast and reach thousands of people with their messaging.  That was a huge turn off, and I blame them too for the lack of implementation of the product. With a strategy of "eff-off" to friendly media, it is no wonder why their product has no traction.

On May 24, 2018 the FDA approved Golden Rice for consumption in the USA, a curious move, because we will never consume it.  Folks here get plenty of vitamin A.

However, when providing a product to the Developing World, many people are rightfully suspicious, and the endorsement of safety from the US-FDA is a good thing. It is symbolic. Period.

However, however, the FDA also stated that the levels of beta-carotene were not high enough to make a health claim.

Based on that last determination, a website called Independent Science News and others reported that the high beta-carotene rice has "no nutritional benefits".   This claim comes from Jonathan Latham, a guy that has fought science and scientists for years.  His website is a cornucopia of drivel. 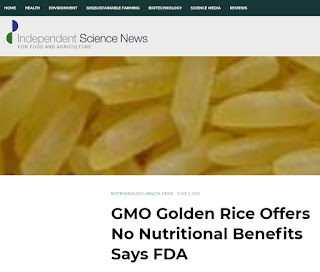 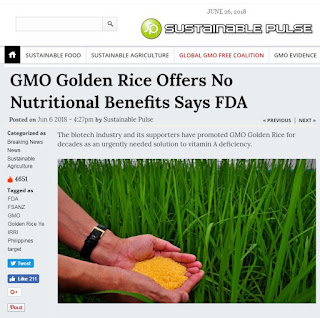 "No Nutritional Benefit" is what the activists claim, but is that what the FDA said?  Why are these groups bending the truth to stop a potentially helpful technology for the poor?


The FDA's words were based on the USA-based intake of rice. At the levels present, and the frequency consumed, there is no likely benefit from Golden Rice as a dietary supplement.  It still has beta-carotene, it still has nutrition, there just can be no health claim in the USA on the label.

After activists and their mouthpieces willfully misinterpret the report, the FDA responded.  Marriana Naum wrote the following statement.  (bold is mine)

It is unfortunate that the statement you reference in our letter responding to BNF 158 has been misconstrued to suggest that there would be no value of the pro-vitamin A in golden rice for its use in the countries where it is intended for distribution.
Our statement applies only to labeling considerations in the United States, in that golden rice contains insufficient pro-vitamin A to warrant differential labeling for nutrient content based on the low levels of rice consumption in the U.S. Requirements for nutrient content claims on labels in the United States take two factors into account, the amount of the nutrient needed as well as it’s concentration in the food and the typical or average level of that food consumed in the U.S. For the rice to be labeled in the United States with a claim containing provitamin A, our regulations stipulate that the food must contain 10-19 percent of the RDI or DRV for the substance per reference amount customarily consumed (essentially a measure of consumption).
Additionally, U.S. consumers eat rice at very low levels compared to consumers in the specific Asian countries with vitamin A deficiency for which golden rice was developed. IRRI reports that consumption of rice by children in Bangladesh is 12.5 g/kg body weight/day, compared to about 0.5 g/kg bw/d for U.S. consumers). Rice is the major staple in those countries and levels of rice consumption are many-fold higher than they are in the U.S. While a U.S Consumer would be unlikely to eat enough of the rice to achieve that value (10-19 % of the NDI or RDA), that does not mean that the level of consumption of golden rice in the targeted countries would be insufficient to accomplish the intended effect of supplementing their very low consumption of vitamin A-containing foods. Consuming rice containing the levels of pro-vitamin A in GR2E rice as a staple of the diet could have a significant public health impact in populations that suffer from vitamin A deficiency.

You've Been Lied To.

Latham and others willfully misinterpreted the FDA report to buoy their sinking ship.  Activists have fought Golden Rice for decades because it represents a positive and almost free way to resolve a world health crisis, but it uses genetic engineering.  They must stop that technology from helping anyone at any cost, even if that means lying to their followers. 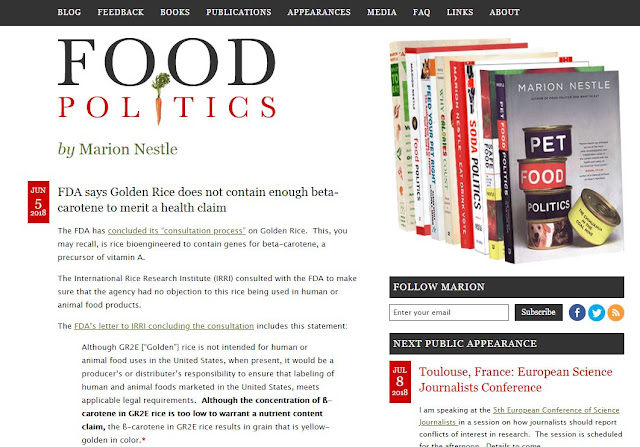 Even trusted academics get it wrong.  Marion Nestle's blog repeats the same errant interpretation.  She also shows that it is ideology over evidence as she usually does.

So if you are against big companies that make seeds for U.S. farmers, that's great.  But realize that when that contempt bleeds into altruistic applications of technology the blood is on your hands.

This is just another stellar example of how groups manipulate their followers and confirm biases to drive ideological viewpoints that are inconsistent with the science.

Why Do You Trust Them?

This "debate" is about a product that is given away for free and could have a profound effect on the health and welfare of children all over the world.  The science is sound.  Why does Latham and others want this product to fail?  What's in it for them for children to continue to suffer from preventable blindness and disease?

Please think about this carefully.  Are you being willingly deceived and defending corrupt opinions at the expense of the most vulnerable?