Everybody asks me, "Have things finally settled down for you?"

They never settle down, the hassles just take on different forms.  I've been watching daily defamation for years now, and long enough to note when there is a curious and concerning uptick in troll chatter.

Dozens of sock puppets, likely representing one single person, follow mentions of me online and then write nasty comments in the comments sections. Usually this happens a few times a week, but over the last week activity is high.

The fact that someone has a job to follow me and my mentions around the internet is oddly creepy.  Ena Valikov has been doing it for years. This could be her, but I suspect it isn't.  I have some good guesses.

The main vehicle appears to be Disqus and Google Alerts.  When I post or something is posted about me on a Disqus-enabled website he/she must get an alert, because there always is a multi-sock puppet convergence right after.

Why this is a problem

We have been making a lot of progress in science communication. We have been getting closer to mastering messaging. We are recruiting new, effective voices, and changing hearts and minds on a daily basis.

Most of all, we've been able to neutralize the hostile attacks on science and scientists, and even their most crafted messages just don't matter.  The messages of fear are stale and never come true. They have been exposed as industry insiders, financed to misinform. The public does not trust activist claims.

We have earned that trust

On the other hand, scientists are gaining credibility and visibility.  The average science enthusiast is pushing back, and fighting to correct what used to be unopposed false information.

Scientists are communicating well and making a difference.  We are getting a wider audience.

Backed into a corner

I've been a bit on alert about this because the major organizations opposing crop biotech are getting desperate.  Like a crazed badger backed into a corner, they are getting more desperate.

As we've seen, they are not interested in facts, but simply putting information into the public space to erode trust in public scientists.

This is particularly a problem because it appears as though they are manufacturing new narratives.  One said, "We know all about the prostitutes."  I'm taking that as a warning shot at the next claims they will make. 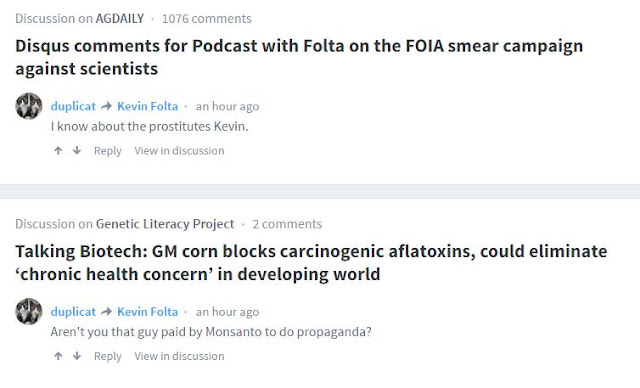 They post on websites that feature my work, even in the comments section of my own podcast.  The great irony here is that they refer to protecting developing-world consumers from potent carcinogens as "propaganda"

I know this is one person, maybe two.  How?  Because when I block certain trolls other ones show up. I've shown how these coordinated troll infestations happened before.

They also cut/paste from their own text.  Not only are they wrong and evil, they are lazy. 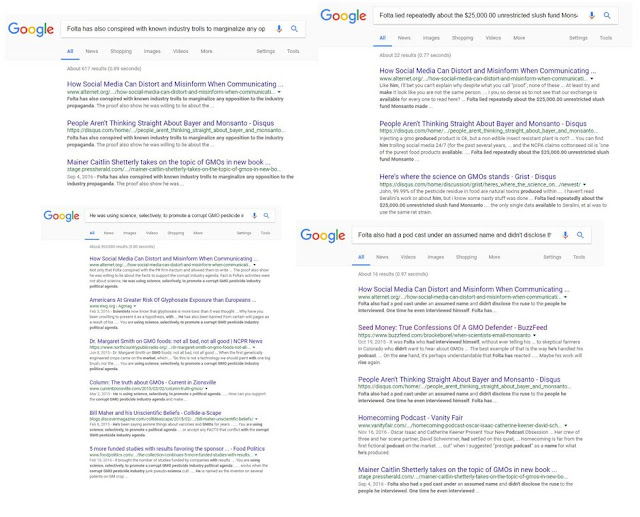 A google search of their claims shows that their rants are cut and pasted from other troll accounts, supporting the hypothesis that these are really just one person.

Now is not the time to dial it down. Now is the time to increase our good work and take the highest road we can take in communicating science.  Recruit new voices.  Write daily.  Their ship is sinking and showing scary hints of desperation.

Science communicators and science enthusiasts are shifting this conversation.  Continue to win the trust of people that are simply concerned about their food.