Once again, the we see the familiar rejection of the old axiom, "You can't polish a turd," as apparently you can.

The Florida Department of Education posted their results from last year and pointed out that "Science performance remained consistent."

That's great because consistent means the same level of achievement as in recent times.  Must be pretty good, right?  A quick look at the numbers shows that this science glass is half empty, not half full.

"Consistent" performance isn't such a good thing if it is consistently awful.

What does "consistent" mean?  Let's look at the numbers from the standardized FCAT exam that all students need to take: 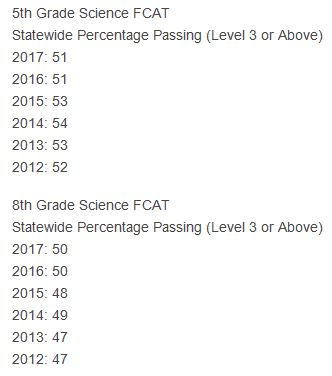 The FCAT is a standardized exam students take in 5th and 8th grade.

In a sense we can wipe our collective educational brow, as "consistent" means it isn't getting worse.  At the same time it shows that half the students do not pass the exam. Half!  By Florida math that's like almost fifty percent.

To add insult to insult, it is not that fifty percent did well-- it is that fifty percent achieved enough to pass.  Pass usually means seventy percent. This likely translates to a vast minority of students exhibiting mastery of scientific topics.

The correct statement from the Florida Department of Education should not be that science performance remained consistent.

The statement should be, Science performance is unacceptable, and inconsistent with the need to train a future workforce prepared to pursue opportunities in the leading areas of technology.

I don't suspect Florida is alone. When consistent failure is the standard it is no wonder why our nation is falling behind, losing our technological edge.

It also is little wonder as to why we still have tired discussions of climate change, vaccines and genetic engineering.  A population that fails to learn science is likely to subscribe to motivated reasoning, gravitating to conspiracy and distraction instead of science and reason.

A solution?  That's tough.  Teachers I know are deeply invested in student scientific development.  An interest in these areas must be fostered beyond the classroom, and resources in the classroom improved.  That could be helpful.

In Georgia, they took a different approach.  They just put an ardent KKK defender on the Georgia Education Board, apparently to clean up education in civics.

We have plunged headlong into bizarre race to the bottom, when mediocrity is the accepted norm and disconnected from the realities of the future.