Dr Nestle, Cry Me a River

I don't like the vindictive feeling of saying, "Well there's karma coming back to say hello," or the whole eye-for-an-eye thing. Nobody ever should be maliciously misrepresented in media, and I'll always be critical of that.

But it is important to point out amazing hypocrisy. Someone that claims to have been wronged is the exact same person that celebrated the harm of others, and promoted false information to hurt someone professionally and personally, and refused to discuss it or make corrections when kindly approached about it.

The emails are all shown below.

Before September of 2015, I felt rather positive about Dr. Marion Nestle. I always appreciated her views and always took the time to consider them and understand where she was coming from even if I disagreed. In fact, we probably agree on food issues much more than we disagree.

So in September of 2015 when she decided to unfairly amplify the retracted distortions of Paul Thacker and Charles Seife (that to this day remain on her popular blog without correction or apology), and then take a victory lap when Eric Lipton published his smear piece on me, I lost a lot of respect for her.

You'd think that a fellow academic might pick up a phone and attempt to learn the facts before amplifying the nonsense, but even someone I thought of as an objective thinker succumbed to a sexy story that clicked her confirmation bias so hard that she could not help but shout it from the mountains and take a victory lap.

It was amazingly hurtful and damaging at a bad time. 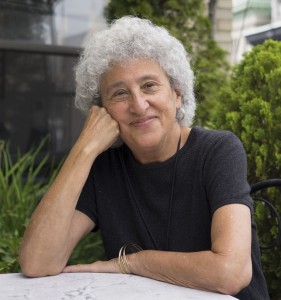 Dr. Marion Nestle feels like she was taken out of context and misrepresented in a new film, yet she is quick to misrepresent others, impugn  their integrity, and then ignore their requests for corrections.

WHY DOES THIS MATTER NOW?

She's claiming that her words were taken out of context in the new film, Food Evolution.

She appears in a ten-second clip stating that genetic engineering technologies are known to be safe, during a part of the film where they were discussing safety.  That's how documentaries work. Tell the story through the words of the experts.

But in her blog yesterday she called the film "GMO propaganda" and said that the quotation was taken out of context.  The general feel of the article is that she feels that the film misrepresented her sentiment.

However, the words she expressed in the film were hers, and also are consistent with the vast scientific consensus, including a synthesis by the National Academies of Science.  Nobody will think less of her for her input here-- in fact she'll earn respect.

SHE DISHES OUT WORSE.

So the idea that this is some sort of breach falls on deaf ears, especially because of what she wrote about me, as others took words in my personal emails out of context seeking character assassination.  While she didn't pull the trigger, she was thrilled to rub salt in the wounds, siding with lies and distortions to impeach my credibility and drive scientists into silence on key issues.

Ultimately it is words like hers that will follow me to the grave in the internet age. Sadly, Nestle is one of the many that has led to the defamation that will ultimately affect my career advancement and other opportunities. It has already happened.

Back in August of 2015 Paul Thacker and Charles Seife wrote a false and defamatory article about me based on emails obtained by US-RTK.  The emails were mine, the words were mine, but they were pulled from context and misrepresented, telling a narrative that was not true.

Nestle was happy to publish this, and defend this, on her blog.  The story was false, it was retracted, and she seems almost annoyed that it was.  The words lifted from the "COALITION" email were words where I was cc'd-- I didn't even know the person that sent it. I didn't "advise" Monsanto. If you read the thread, you see that I told someone that worked there that their company was screwing up big time. Nestle and others bend that, claiming it is "advising Monsanto" when it was disagreeing with someone that worked there, in response to a private email that I was cc'd on. 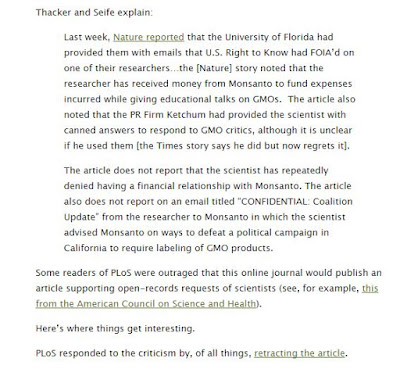 
I don't believe this was personal, I never met her and actually we'd probably talk all night if we did get the chance.  If she knew my research, the work I support, my outreach, and endless efforts to help others, I think she'd probably think I was an okay dude.

But this story was red meat for the Contrived Monsanto Scandal Machine and  I was firmly lodged in the cogs, thanks to a well-coordinated, well-financed smear campaign.  Time has shown that, and will continue to show that.

From Nestle's blog.  Organic Consumers Association is not really advocating for organics and sustainability.  That stuff is pretty lean on their website. They are an anti-biotech, anti-vaccine group that exploits the organic halo for profit and political gain. "Financial ties..." wow. Talk about grasping for straws. 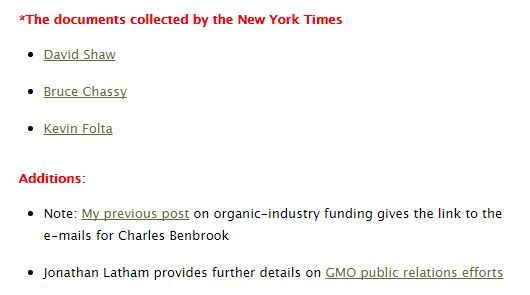 She also links to Latham's piece, an article that was an incredible distortion of the distortion.  A quick phone call would have been nice. But Latham's slander reinforced her bias, so the scientist (that to this day did nothing wrong or broke no rules) gets whacked.

Here she repeats Lipton's lies.  I never was funded by Monsanto to testify on the company's behalf. That's absurd.  All of my funding is public record and this is easily verifiable. It is a lie to make me look bad, a deliberate misstatement to harm an academic that is willing to enter a public discussion about biotech crops.

I find that people that believe this are the people that are easily bought off.  Nobody buys my words, and nobody has ever identified one thing I have said or done that is not in agreement with the published scientific consensus. When I've made mistakes, I've corrected them. For her to suggest that I have no integrity and will do what a sponsor says is basically libelous.

SO WHAT DID I DO?

Back in September of 2015, I was disappointed with her response, so I wrote her a nice email asking her to correct the record.

My email to Dr. Nestle in response to her misinformation-soaked blog.

WHAT WAS HER RESPONSE?

The response-- Put your corrections in the comments (in the toilet of troll space).  The truth is not important to her, even if she hurts an academic scientist that broke no rules and only spoke about science.

SO WHAT HAPPENED NEXT?

In an an interview with Joe Mercola she takes the opportunity to stab me through the heart again, and then impugn my integrity with zero evidence of wrongdoing. 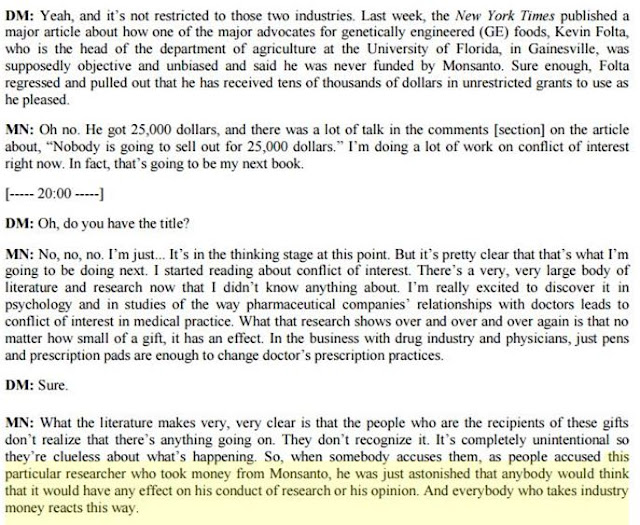 "...any effect on his conduct or research or his opinion."   There is zero evidence that my research or opinions were affected by a contribution to a science communication program that was never used.  Very sad.  I've always represented a perspective consistent with the published literature, as long as I've been working with public audiences.

SO I RESPOND AGAIN. 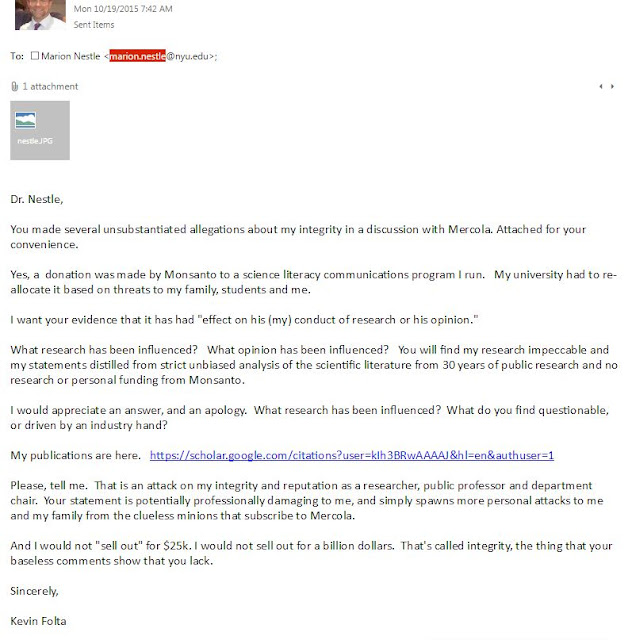 Here's my reply requesting that she substantiate her claims that I'd sell out my integrity.

I decided to let this go.  Sure it was disappointing that another academic decided to spread the false information that I had "sold out" and that I was some sort of industry lackey-- with no information to support that allegation.

So this is why I her claims of being unfairly misrepresented and taken out of context in Food Evolution fall on my deaf ears.  She certainly didn't care when she basically libeled me, and then harmed me more by spreading nonsense, reveling in the situation.

And rather than picking up a phone and calling me-- she continues attacking my integrity for Mercola's website.

This is where I lost all respect for her.  And you should too.

At least her ten seconds in Food Evolution are pretty benign. She won't get death threats and have her career permanently limited, her family doxxed and her information hacked (the stuff I endured because of the information she amplified) because she made a true statement about the safety of genetic engineering.

Then again, those sentiments about science don't always sit well with some folks.

Cry me a river Dr. Nestle. I'm still waiting for your apology.