Hydroponic cultivation is considered to be an important technology in the future production of some specialty crops in urban centers.  The concept is simple.  Indoor farms offer the capacity to grow high-value specialty crops in confined, climate controlled space.  They repurpose poorly-used city space, and hire skilled and unskilled workers in population centers.

Most of all, these operations limit the carbon footprint of specialty crop production, which now does not need long-distance transportation.  In some cases the plant products can ease the deficiencies associated with fresh fruit and vegetable scarcity in urban food deserts, areas under-served by large produce retailers. 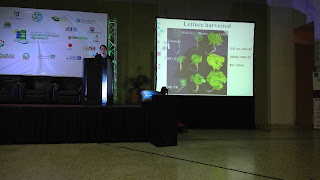 Dr. Wan Feng describes the effects of bioponic organic fertilizers on lettuce production in a hydroponic system.  While no synthetic chemicals are used, it may not be sold as "organic". Photo from ICCEA Panama, May 17, 2017.


In many cases producers are able to grow crops without pesticides, as they can control environmental conditions to deter fungal and bacterial pathogens.  Insects may not be an issue in a carefully devised controlled environment.  These realities seem to match the values and goals of organic crop production.

But hydroponic growers were not allowed to obtain organic certification because they use synthetic fertilizers. Delivery of proper amounts of nitrogen, phosphorous, potassium and needed micronutrients are best delivered by providing them in the liquid media as precisely mixed by fertilizer manufacturers.

Innovative growers started to use alternative sources of fertilizers in a hope to be able to market their carefully-grown crops as organic. They began introducing fertilizer concoctions derived from animal and plant waste, with some success.  The products are more difficult to use, sometimes produce a bad smell, but generally work as an alternative to prepared fertilizers.

Still, in 2016, the  Organic Standards  indicated that these methods would not be allowed to have the organic classification.

This is yet another example that illuminates the arbitrary nature of what falls under the 'organic' designation.

If the goal is to produce more with less, to mitigate the use of synthetic pesticides, and to provide a high-value crop for farmers-- why would this technology be forbidden?  It is a lot like how transgenic crops are disallowed categorically for use in organic cultivation.

Technologies that cut costs for farmers, lessen impact on the environment, and provide better food for people (even more than existing organic standards) should be included in the organic designation.
at May 17, 2017