April 29th was marked on my calendar for a long time.  It was graduation in the College of Agricultural and Life Sciences. As Chair of a department I'm part of the platform party, the folks that sit on the stage during the event.

Many folks look at such university events as a chore. It is Saturday night, you have to wear that skull-squeezing mortarboard and the toasty regalia.  Parking is impossible and you're pretty much staying on campus for the night.

And it could not be more wonderful.

It means a lot to me.

Because they tried to take it away. 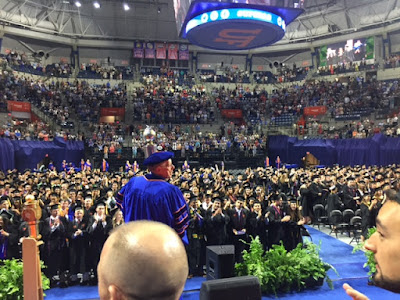 My view from the stage - graduates and their families gather to celebrate.
It is an emotional time, because I almost lost this.

In 2015 I endured a painful personal and professional attack that almost drove me out of science.  Over the last 17 years I've been glad to talk to the public about genetic engineering, and that bothers those that profit from fighting it.

Activist organizations used FOIA laws to gather my emails and develop false and damaging stories about me that were not true. Some were pulled because they were false.  Others were printed in the nation's most credible papers, even though they were lies.

The false information moved quickly through legitimate media. I was branded as a scandal-clad patsy, and words like "corruption", "liar" and "scandal" were thrown around next to my name.

When you dedicate your career to serving others and doing the right thing, such allegations cut hard.  The reputation damage hits like a mallet.  I don't have kids, I don't have much of a life outside of the research I do and the people I serve, the students I teach, the scientists I guide.

I almost quit.  I was contacted by folks in industry with attractive offers to leave academia.  The salaries were crazy big and opportunities interesting.

Ironically, while some were calling me a "paid shill" -- I was turning down an opportunity to seize personal compensation and peace, because I wanted to fight for public science.

I was frustrated by the science writers that wrote before looking at evidence.  Even those that I admired threw me under the bus. A few stepped up and dug deeper, then turned to my defense.

It was the kindness of strangers that helped pull me through.