I saw this tonight in the Twitterverse and it just about blew me away. There is a potential that this is a POE or April Fool's Prank. 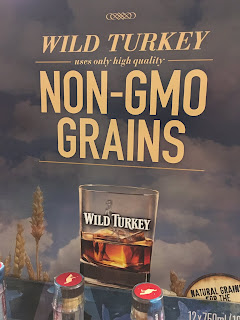 There is no comparison between the risk associated with biotech-plant-derived ingredients and the alcohol in beverages. Bad marketing angle to get people critically evaluating the risks of what they are consuming when you sell a known carcinogen.

Bourbon is made from fermenting corn, rye and barley, so I guess some genetically engineered corn could make its way into the mix. But over the last twenty years there is not one case of GE corn being a health risk-- and no clear way that it could be and not be realized pretty quickly.  We're talking a perfect safety record.

On the other hand, Wild Turkey proudly touts plenty of ethanol.  Ethanol is the alcohol that deliciously underlies the psychoactive impairment we all know and love.

But ethanol is a known carcinogen. Even the IARC calls it a known carcinogen, in the same group as formaldehyde and benzene.  For the folks that flip out that glyphosate is a "probable carcinogen" in the IARC's view based on tenuous data, this ranking for ethanol should make them fear sitting next to someone with an open beer.

On the other hand, ethyl alcohol, 40% of their product's volume, is known to cause 88,000 deaths every year from related diseases.

A product with substantial risk factors misdirects the consumer by implying a crop technology carries risk.

It is truly deceptive, and if I was a company that essentially sold a poison* for profit, I would not draw the consumer's attention to actual risks.