April 21, 2017
Today I posted some rather positive news. Students from my lab visited a school and taught six kindergarten classes how seeds grow, and we provided a seedling to over 150 students.  Each plant was in a test tube and could be planted in the garden later.

The idea is to get kids to connect to science and grow healthy food in their homes.  The materials were paid for from my science outreach program. 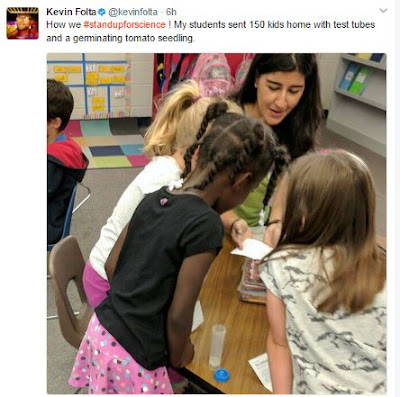 A tweet about planting seeds with grade school kids ignites a hate storm.


But on the eve of the Science March, the idea of kids participating in STEM is apparently a threat to many.  This, along with a comment from a Purdue faculty member about my talk yesterday ignited the hate. 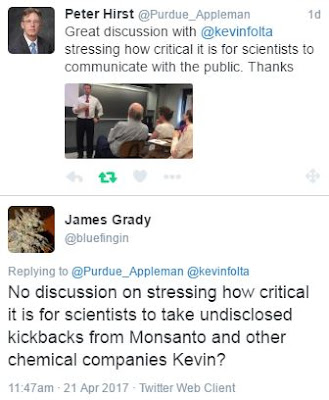 So I posted a link to my funding history, which includes no funding from Monsanto.  Zero.

Then Gary Ruskin, from the industry-sponsored front group US-Right To Know, posts a letter from Monsanto to me obtained freely from my FOIA'd emails. The company agreed to sponsor my outreach program (including the school stuff shown above) back in 2014. It was a really good thing.

This was not for research, not for teaching. The donation to the university was to help rent space, buy doughnuts, put out coffee, buy flash drives, etc for an existing science communication program.  My workshops teach scientists, farmers, etc how to talk to the public about hot-button issues like vaccines, climate and genetic engineering.  It is much more about psychology and communication than discussion of scientific evidence.

Before their donation (and since) I funded the workshops with honoraria and speaker fees (that could go to me personally), along with donations from the public.  Those are all listed on the associated websites.

Because of the hysteria and hate that Ruskin and others fomented, there were threats against me, my lab, and my family.  It was so bad that the Domestic Terrorism Task Force was involved. I still am not to open packages that come to my house or work unless I know who the sender is. Their goal was to stop me from teaching science.

Ruskin works for an NGO dedicated to eroding trust in scientists. To keep his hundreds of thousands of industry dollars coming in, he must stop scientists from communicating. He knows that he can post the letter and re-invigorate the hate. He has a "gotcha", he knows it's slimy, and will continue to use it. That's the kind of ethics he has. Plus, it is best they can do to try to hurt me.

It brings hate from folks like Joe Norman (@normonics), a computational scientist at the New England Complex Systems Institute. He spews unbridled abuse that is a symptom of someone truly unhinged.

This is just a sample of Joe Norman's recent abuse that I've had to endure.  He eventually deleted the whole thread, and there's lots more that I'm glad to share. I'm glad to block/mute etc, but is this the kind of behavior we should expect from someone claiming to be a scholar?  If I was his academic advisor or if he worked in my department I would get him some professional counseling.

And many others. I could post them here, but just go read Twitter. Here are a few gems. 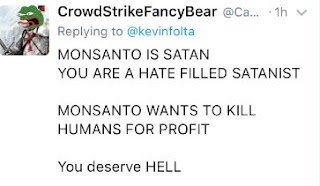 Just a couple of sweet people that hate before taking the time to actually learn what a situation is all about.

The point is simple.  Ruskin took a boilerplate letter where a company donated to an outreach program and used that to fabricate a story of grand collusion.

Ultimately, the money was never used, and the university donated it to a campus food charity.  The outreach program lives on, and pays for things like the test tubes and seeds to bring to schools above.

And not once has anyone shown anything I've said in a blog, speech or presentation that is inconsistent with science. Nobody has ever questioned my research.

As people convene to March for Science, it is important to remember what we endure as we stand up to communicate research, evidence and the methods of science. There are many out there that still insist on harming the reputations of those that teach, as they are a legitimate threat to their ideologies.