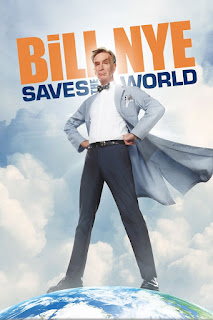 Preaching to the choir, the first episode makes a critical scicomm 101 mistake.

I was pretty psyched to hear that Bill Nye was part of a new series, Bill Nye Saves the World.  The Netflix show promised to bring a science to a popular audience, and would not shy away from hot-button issues.  This kind of science programming is important. We live at a time where the very process of science must be applied more vigorously to analyzing critical issues-- yet politics, belief and popular culture push back to limit its application or the results it brings.

Last night I watched the climate change episode-- and here is my review.

First of all, let me state that I appreciate what Nye brings to the table. He is an established, visible personality that clearly has an audience. His brand resonates with many science enthusiasts, and it does with me too. His following is loyal, which is why any criticism of The Science Guy earns you harsh flames from passionate followers, even if you have a legitimate criticism.

Which is why I'm writing this review.  When I criticized Nye in the past I received dozens of angry emails and tweets.

Nye previously touted incorrect positions on genetic engineering, and even produced videos where he got information dead wrong. No scientists consulted, bad data, horrible misdirection of people that trusted him.

It really made my job difficult. At the same time he was out setting the record straight with Ken Hamm about evolution he was causing nightmares in the scientific community that helps the public sort out genetic engineering.

Back then I contacted him privately via his website, but received no response.

So I took it public.  In this spirit of his debates with Hamm, I invited him to defend his (incorrect) position on GE crops, participating in a public debate on the issue. A student at Purdue took the liberty to reserve the space and make it happen.

Again, not a peep from the Science Guy.

The good news is that later that year he'd reverse his opinion, letting evidence tell the story.  That's a good thing. However, it is a reminder that we all have blind spots, and those in the limelight are also susceptible to producing soft information.

The limelight also provides a patina of credibility and trust that lets the bad information flow-- even if it is wrong.

My criticism of the BNSTW climate episode is not the central concept of climate change-- it is how Nye delivers content, and ultimately squanders an opportunity to share science more effectively with the people that need to hear it most.

Clearly the earth is getting warmer and human activity is certainly a contributor-- how much is the gray area of computer models and scholarly debate.  However, the effects on biology, geology and weather are clear indicators that change is afoot, and we should be taking steps to adapt to change, if not taking steps to mitigate its acceleration.

BNSTW features beautifully shot, scientifically-correct passages, mostly dwelling on the effects of rising tides in the most vulnerable coastal areas-- like Venice, Italy.  Here a small increase in sea level has profound impacts on this historical coastal treasure.

The show also gets high marks for featuring talented, sharp women scientists to balance out the prototypical stale, pale, male.

But does the show reflect what we have learned about how to best communicate a scientific topic-- especially one of public controversy?  This is where BNSTW really misses the mark.

The discussion was much more political and preaching to the choir than scientific. The opening salvo was trite, suggesting that chocolate, fish and coffee are threatened. In all of the scholarly discussion of real threats, these are pretty low on the list. Between the cheerleader-like gestures and the hoots of a condoning crowd, Nye's rah-rah-climate-change message invigorated a political base-- but alienated those that do not accept evidence of climate change.

This is bad because the deniers are the folks that need to be reached, and need to probably plug into the topics in the whole series.  They were turned off a few minutes into Episode 1, never to dial in again.

Sadly, the in-your-face nature of the show also turns off the folks  in the middle, those that don't know who to trust, but are seeking answers.  Low blows and cranky criticism turns them off, and probably pushes them away from the whole series.

The pilot episode makes the mistake of yelling into the echo chamber, prodding those that don't understand/accept the science, and turning off those that want to learn more.  This is a serious tactical error in a science show that has the best of intentions to share science more broadly.

Nye needs to start with acknowledging why policymakers and others deny the evidence of climate change.  He then has to talk about the values he holds dear as a scientist-- environment, food, farming, the needy, etc. All of these are imminently threatened, and when we place our ethos first, ears perk up.

Yes, we are all on the same team.

What is the evidence we find compelling?  Is it the three more weeks of farming Canadian farmers enjoy?  The trees in the Pacific Northwest that are dying from the heat?  Ocean corals that are dying?

And yes, Venice fits this approach well.  Saving our historical treasures. Even though many climate skeptics aren't sure if Venice is in Italy the place they went to Hooters last time they were in Florida.

We don't change minds with facts, especially around contentious issues. If this is an important issue, and it is, then folks with visibility like Nye should strive to get out of his silo, out of his comfort zone. He should kibbutz with influential leaders in other social tribes that hate his message.

Nye, a big pizza, and House Science Chair (and climate denier) Lamar Smith could have a wonderful discussion that would change the minds of disagreeing viewers and those tuning in to understand the problem, not push them away.

As a means to rally the convinced around the reality of climate change BNSTW is good. However, these folks are typically technologically adept and know where to find relevant climate data.

The show misses a great opportunity to shift the middle, by showing empathy to opposing positions, talking about values, and how science is adapting to the warming trend to protect farmers and the environment.

It does no good to scream into the echo chamber. Nye has reputation, gravitas, and knowledge that would make him a much more effective spokesman for science if he kindly interfaced with those that look to him for information.

Unfortunately, BNSTW gives a big sad "Eff-Ewe" to the folks that most need to be reached, and only exacerbates the tension around a sadly contentious topic.
at April 26, 2017