January 30, 2017
It is heartwarming to see a little discontent inside scientific community.  To those of us with careers in the discipline, the daily assault on reason is part of the experience, and the scourge of fake news and evidence denial are well known.  We’ve watched it for decades with the frustration that empirical evidence and inconvenient truths were cast aside in policy discourse and public discussion, propagated by a complicit media.  Willful ignorance has spawned a hot planet, expensive ballot initiatives for warning labels on safe food, calls to teach about a 6,000 year old planet in science class, and outbreaks of diseases long believed to be defeated. And that’s the tip of a melting iceberg. 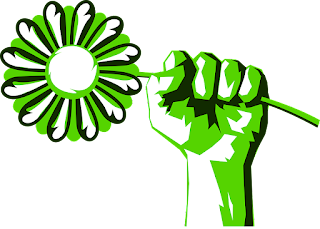 Scientists, nice to see you raise a fist, but think before you fight.

Scientists themselves have even ventured into the public discussion only to be falsely maligned everywhere from crank websites, to conspiracy radio shows, to the Old Gray Lady herself.  The outrage from the broader community is typically gooey and short lived, if it even happens at all.  It is about what we’d expect from non-confrontational nerds engrossed in more important pursuits.

But now a new attack on science appears to be well underway, and some long overdue mental magma is finally pumping in the community’s normally molten core of soft serve.

Recent Presidential mandates drew quite a reaction from the scientific community, some appropriate, but some overstepped.  That’s a major problem.

USDA Bungle
The big screw up happened upon the notice from the USDA.  The internet exploded with news that the Agricultural Research Service (the USDA research arm) was suspending publication of any “public facing documents”.

Scientists interpreted this as a broad swipe at suppressing the flow of data.  I did it too.  I retweeted and shared the rage!

I was inundated with tweets and emails, asking about the gagged silencing of USDA employees. As the internet’s network inflamed the story, USDA scientists in the Agricultural Research Service were apparently blindfolded and bound, loaded into unused Amtrak trains (which is most of them), and relocated to Area 51.

Oops. We just royally effed up.  We over-interpreted the message, which ultimately was nothing.

Bad move, scientists.  We are so poised to react, that our outrage was misspent.  Most of all, it made us look bad to those that wish to discredit our normally measured reactions.

Everyone from internet science sleuths to Bill Nye are calling for a Science March on Washington, a chance to show solidarity among those that value the scientific method and embrace the truths that science gives us. Good for them.

Not me. The best way I can support science and scientists it to create durable work and actively create the change I want to see.  This is a long game, not an expensive afternoon in DC. The cure is investment of our non-existent time in public-impact pursuits.

For me to get to DC, stay a night, and uber around will cost me at least $500, and that’s if I bivouac with other smelly scientists and dine on stale peeps and trail mix.

The Science March should be a website showing the beautiful things we did specifically in response to the anti-science movement.

Again, it is nice to see a little rage bubbling from within the lab coat.  The challenge now is to channel the energy properly.  At this point we need to be sure that our efforts are appropriate and consistent with the evidence.  Then let’s avoid knee-jerk reactions and implement effective and visible means to protest, flooding social media with overwhelming acts of good.


We have the cred.  Others might be trying to take it.  Let’s not make it easy for them.

In research we are taught to challenge evidence presented, even from trusted sources.  We claim to guard against self-deception, and over-interpreting data.  We portray ourselves as responding in measured, calculated ways that maximize impact of our actions.

I’m just suggesting a little self check here and watch out for jerky knees.

Like I said in the opening, we’ve lived in the midst of science denial for a long time and are poised to fight back against coordinated encroachment from a demonstratedly science-soft administration. Let's not jump the gun and look bad doing it.

Let's not create a stir, let's invest that energy and create change.