Journalistic Merchants of Doubt Seek to Destroy Trust in Science

In last week's New York Times, reporter Danny Hakim once again provides a political cherry picking that strives to harm public perception of science.  Hakim is part of a cadre of journalists that clearly have personal disdain for conventional farming, particularly if it is supported by technologies from biotech seed companies.

His series in the New York Times is called Uncertain Harvest, an ironic term seeing as though food security in this country and around the world has never been better.  Thanks to improvements in genetics and production techniques, the harvest has never been more certain.

There absolutely still is a lot of work to do. Food insecure regions of the world will benefit from new technologies. Our inner cities feature food deserts, areas of poverty devoid of healthy fresh food. Ag producers in the industrialized world will rely on new technology to help them  remain profitable and competitive.  There is no question of this in the scientific community.

Yet journalists like Hakim attain a visible venue in a place like the New York Times that grants them presumptive authority to report news that isn't news at all, but instead are veiled political statements.  The goal is not to illuminate the success of science, but instead to erode, as best as possible, the public's trust in technology and the scientists that create it. They also provide red meat to the anti-agriculture, anti-science movements that I'm guessing are probably pretty tight with Hakim.

In the past, activist organizations like US-RTK, financed by aggressive anti-biotech NGOs and corporations, provided cherry-picked stories to reporters like Eric Lipton.  Lipton subsequently prepared false narratives targeting scientists (myself included), tarnishing our reputations as trusted public servants and instead categorizing us as an "inner circle of industry consultants, lobbyists and executives" that do the bidding of corporations in return for research grants. Quid pro quo.

This is about one thing-- destroying trust.

Hakim continues this attack on science and reason, implying that scientists are malleable agents of companies. That's great news to those paid by the anti-biotech industry, as clearly the whole system is corrupt. 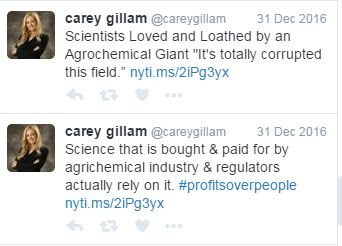 Since Hakim, Gillam and Lipton point out that scientists are just corporate lackeys that can't be trusted, I thought it might be fun to see how much research was sponsored by companies at my university.  None of mine is, and you can look at my lifetime funding record here.

How many corporate dollars are corrupting the University of Florida's ag research enterprise?  Take a look at our 2015 numbers. 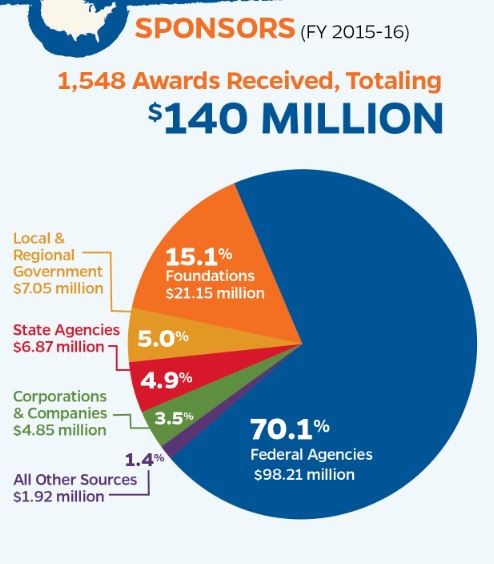 Shills!  A whopping 3.5% of funding comes from corporations and companies, and very little from the Big Six (Five? Four?).  Most comes from companies like Tupperware, local interests, small ma  pa's, fertilizer companies, and irrigation firms.  It is a really diverse set of companies sponsoring that  $4.9 million to UF/IFAS.  The median award is probably $20,000, and that is used wisely to conduct specific research.  Read more here.

In short, a tiny fraction of research funds come from companies.  Frankly, they should be paying more.  They are frequently the beneficiaries of increased knowledge in agriculture, as well as the training and education we provide to the next generation of scientists.

If anything, this shows how our support comes from non-company sources, and should be central in building public trust.  The taxpayer pays the bills, and we are a public institution that does work that benefits our State, citizens and stakeholders.

But that does not make for flashy headlines, and few reporters will cash a check on "Public Scientists Working for You!"

It is more about advancing a political agenda, and that means telling narratives based on cherry-picked quotations and wild exceptions to the rules, rather than on reporting reality.

This is the job of a new flavor of yellow journalism. It is to portray public servants as dupes of corporate interests and convince the public that science can't be trusted.  Find a way to land narratives in visible papers like the New York Times, posing as some sort of groundbreaking expose'. Their messages are then amplified by journalists paid by NGO's supported by industry, or by industries/NGO's/activist groups that target farming and agricultural technology.

They hate the fact that we have earned the public trust and are changing the perceptions of food and farming.  They want to tarnish our halo.  Share the facts.

Even if corporations funded the science 100%, does that matter? - that's the topic of my next blog.