August 28, 2016
My podcast has been up for over a year, now reaching 50 episodes.  In that time it has been a pleasure to cater to an audience of scholars and science enthusiasts.  I've deliberately kept the content hard with science, minimal with opinion, and sticking to the evidence.  I've avoided Big Ag products and focused on the good things technology can do.

In general, the anti-GMO world has left me alone.  I don't find much negativity about the podcast online and the site itself is generally unmolested.  I do occasionally receive disparaging comments, but curate most of them out when received. This is an educational forum.

So imagine my surprise when I posted this week's podcast on the Bt Brinjal (eggplant, aubergine).  The response was angry and vitriolic, both in submitted comments and in social media.

The podcast comments section has a dozen comments like these, all unapproved. I'm not allowing an educational resource to become their cesspool.


Some of the response on Twitter was surprising (I asked for permission to use their fully names, the principle dissenter objected, so I edited him out. However, this is all public information on Twitter if you go read those threads and their amazing ignorance in their entirety). 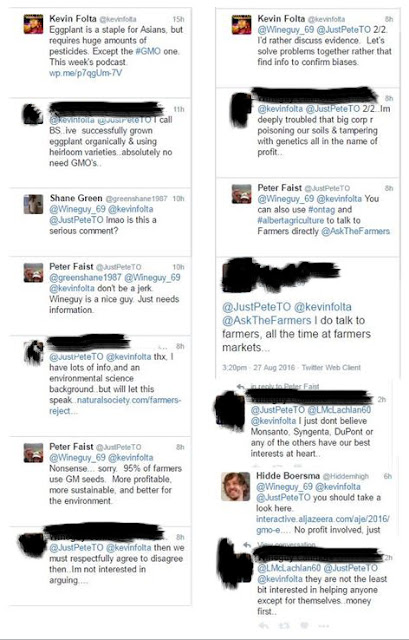 The Twitter threads are priceless.  This wonderful resource is smeared as another arm of Monsanto's empire.  Even when folks are corrected, they just push back.

More on Twitter.  Good ol' Rick H never really offers evidence, but sure is quick to throw someone under the bus.

What is happening here is amazingly obvious.  As "Carl's Spokesman" says, these folks are really angry because the Bt Brinjal let's all of the air out of their balloon.  Free seeds, poor farmers, less insecticides, better products.... where's the downside?

The downside is that if this story becomes widely told, it represents the end of their war on science.  It is an example of how the technology should be used-- for the betterment of human health and the environment.

They are having a remarkably hard time arguing with that.

So what happens when ideologically bent opinion can't argue based on evidence?  It becomes an ad hominem effort to trash the messenger.  The personal attacks on my credibility and the continued mantra of "Monsanto, Monsanto, Monsanto," is typical of these folks when they are backed into their corners with simple, kind questions.

It appears that science has hit a nerve.  Some of the poorest people are growing food and eating, sustainably.  You'd think that critics would be celebrating.  But to an emotional and science-free movement, when the technology they oppose serves others, they are caught between acknowledging that it is doing good and abandoning their sacred belief that this technology can do no good-- ever.

Maybe that just means that their beliefs need to be re-examined.