Today is the last day to nominate someone for the Maddox Prize, a recognition that goes to the scientist that continues to operate at the public interface despite adversity.  I have watched the vicious and defamatory attack on Dr. David Gorski, and I submitted a nomination recognizing his contributions, despite the hostility he faces in defending science.

The harsh treatment of Dr. Gorski has littered internet searches with false and defamatory information about him. Front-page recognition of his efforts with this award would bolster his reputation as a scientist and physician, and counter the claims made by those that wish to silence his efforts. 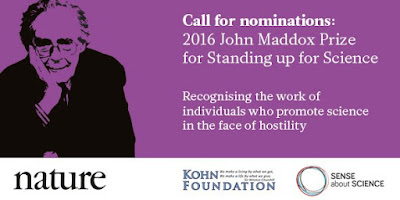 I submitted my nomination for Dr. David Gorski. Learn his story, the defamation that has happened in the last year, and consider writing a letter of support.  Submit here.

David Gorski is a Professor of Surgery at Wayne State University School of Medicine, and a surgical oncologist at the Barbara Ann Kamanos Cancer Institute.  He is a prolific author in the medical literature, present as an author on over thirty peer-reviewed journal articles and his work cited 1230 times in the last five years. His work centers on the genetics and biochemical mechanisms in breast cancer, along with elements of patient care. He also publishes frequent reviews and opinion pieces targeting physicians and medical researchers, in the same medical journals. These topics are strong scholarly criticisms of homeopathy, acupuncture, and alternative/complementary medicine. His career and impacts would be notable simply from his university-level efforts.

But Dr. Gorski is known best to most of us for his work at the public interface. He is also a prolific blogger, placing meaningful, complete, and scientifically dense-but-approachable information online about topics of social interest. In particular, he does a lot of mythbusting, a lot of discussion of fraudulent medical claims and the people that promote them. He is the Managing Editor at Science Based Medicine, a popular blog that examines medical claims. He also writes for the blog. In addition, his work appears in Science Blogs where he publishes the blog Respectful Insolence under the nom de plume “Orac”.  On this latter blog he publishes articles almost daily.  These are not trivial reads. He publishes well-researched and deep articles that are well written and thought provoking.

Provoking is the operative term. Because of his effective advocacy and outreach Dr. Gorski has been targeted by non-scientists with agendas.  Gorski has always been appropriately critical of “complementary and alternative” medical approaches, and has been an outspoken critic of vaccine denialism.

This raises the ire of the folks in the alternative medicine communities, along with all of the others that see an indictment of alternative medicine as a threat to their medical or lifestyle beliefs.  He has been the target of Generation Rescue, Age of Autism, and others that have created false controversies to try to get him fired from his job.  He has been a target for almost two decades, but the onslaught has certainly ramped up since 2010, only to massively explode in the last several months.

Most recently Gorski criticized the anti-vaccine movie Vaxxed, a movie supported by Hollywood heavyweights like Robert DeNiro.  The website Natural News embarked on a massive smear campaign that would post defamatory messages almost daily (go there and search for his name!). The articles imply associations between him and pharmaceutical companies, as well as associations with an oncologist that committed Medicare fraud. They have posted fake patient reviews on associated websites and reported him to the FBI and state medical board.  This is the tip of the iceberg.  The incredible online defamation is unbelievably dense. As happens, those that follow these credulous sources are ignited by the fury, leading to personal, hateful attack and threats.

The effects of such relentless and horrifying personal and professional attacks are real.  While Gorski’s regular readers and colleagues undoubtedly brush off such nonsense, the potential damage is real.  The internet has a long memory.  A cancer patient referred to an oncologist will immediately investigate their credentials, and dig on the web for complaints.  Cancer care is serious business, and vetting your health care provider is the first step.

But a Google search of his name brings well optimized smear in conjunction with his blogs, credentials and other credible work.  Again, to those that understand how these hateful organizations work, it is easy for us to ignore such claims-- but to a potential patient looking for health care?  If there is any controversy, even the word “fraud” mentioned in association with the physician’s name, a potential patient is likely to seek medical advice elsewhere, which is bad for Gorski, but is really bad for the patient, who might miss exceptional treatment by a top teaching hospital physician and scholar.

Also appearing on the front page is the “Truth Wiki” a search-engine-optimized slanderous hellhole of defamatory information.  On this page Gorski is picked apart and branded as a “vaccine industry frontman”, a “shill for pharma” and deep commitment to “fraud”.  He is constantly barraged by claims of conflicts of interest, even though just about all of his funding comes from federal sources or foundations. Despite all of the allegations, no evidence of misconduct has ever been alleged. He has stated clearly that he has never received personal compensation from any medical or pharmaceutical company.

The baseless indictment of a physician and scholar is difficult to watch, and the reverberations through the internet are intolerable. For these reasons I prepared my nomination, and urge you to do the same.

While he has undergone this brutal public beating I have watched him only respond with tact and class. My hope is that our nominations will resonate with the committee and he will be recognized for his outstanding work, even in the face of bitter adversity that seeks to tarnish his fine reputation as a science communicator and potentially threaten his career as a leading surgical oncologist.
at August 01, 2016